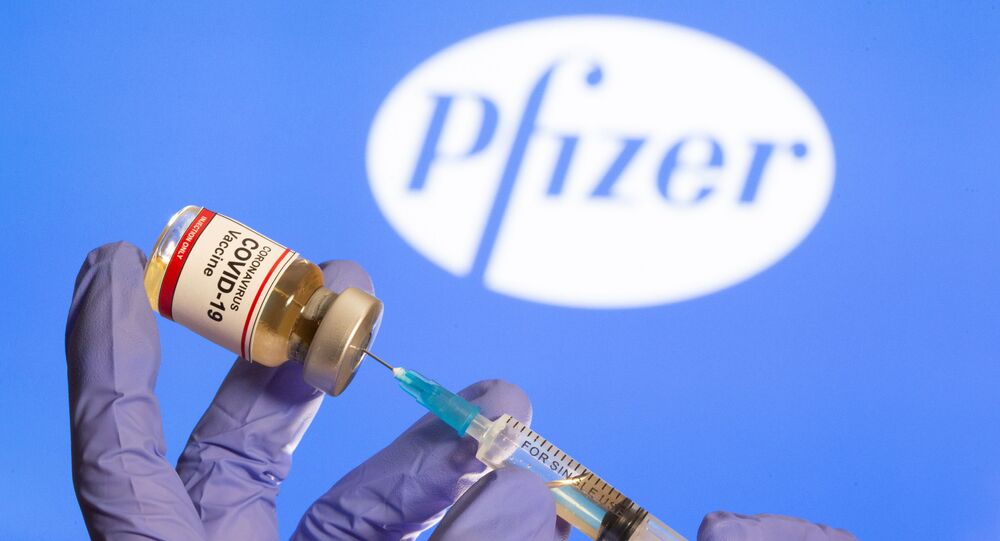 American multinational pharmaceutical company Pfizer has completed its phase 3 trial of its COVID-19 vaccine candidate and has found its vaccine to be 95% effective against the respiratory illness. The company is currently seeking emergency use approval from the US Food and Drug Administration (FDA).

According to a report by CNBC, citing people familiar with the matter, United Airlines carried Pfizer's vaccine from Belgium's Brussels to Chicago, Illinois, on Friday, as pharmaceutical companies are beginning to prepare for possible wide distribution of their vaccines. It’s unclear how many doses of Pfizer’s vaccine, developed with German partner BioNTech, were on the flight.

A source familiar with the news also told NBC News that the US Federal Aviation Administration (FAA) allowed United to carry 15,000 pounds of dry ice per flight, five times more than the amount usually allowed, to keep the doses cold, Sputnik previously reported.

Pfizer’s vaccine must be stored at a temperature of minus 94 degrees Fahrenheit or lower, according to Reuters, because the vaccine uses synthetic messenger RNA (mRNA) to prompt the body's immune system to respond against COVID-19. Last week, the Wall Street Journal reported that the drug company designed suitcase-sized boxes packed with dry ice to keep its vaccine doses at the required temperature.

Although United didn’t confirm details of the flight, the airline did note in a recent statement that it is working to support “a vaccine distribution effort on a global scale.”

“United Cargo established a COVID Readiness Task Team earlier this summer to help ensure we have the right people, products, services, and partnerships in place to support a vaccine distribution effort on a global scale. We have made a commitment to our pharmaceutical and medical customers that we are ready to safely and effectively support their vaccine transportation needs. The safety and security of these commodities is our priority and we are proud to be a trusted partner in these efforts,” the airline said in a statement obtained by ABC7.

The FAA in a separate statement on Friday also confirmed it was “supporting the first mass air shipment of a vaccine” and said it was working with airlines to ensure the safe transportation of such vaccines, the Wall Street Journal reported.

Although Pfizer has yet not commented on the news, company spokesperson Kim Bencker previously said that Pfizer won’t release the vaccine “until the FDA issues an authorization or approval,” CNBC reported.

Pfizer submitted its application for emergency clearance on November 20, and the FDA is expected to discuss the clearance during the next Vaccines and Related Biological Products Advisory Committee meeting on December 10.

A relatively new type of treatment, mRNA vaccines like Pfizer's work by providing instructions to healthy cells to generate antibodies for a certain virus or bacterium. Conventional vaccines, on the other hand, introduce a weakened or dead virus or bacterium into the body. This induces an immune system response, allowing the body to recognize and fight the pathogen in the future.

In addition to Pfizer's vaccine, phase 3 clinical trials in the US are in progress or being planned for COVID-19 vaccines developed by AstraZeneca, Janssen, Moderna and Novavax, according to the US Centers for Disease Control and Prevention (CDC). AstraZeneca's vaccine, developed in conjunction with the University of Oxford, has been found to be, on average, 70% effective.

Russia in early August became the first country to approve a COVID-19 vaccine. The drug, named Sputnik V, was developed by Russia’s Gamaleya Research Institute. Clinical trial data has shown that Sputnik V has a 91.4% efficacy 28 days after the first dose and a 95% efficacy 42 days after the initial dose. The data was obtained from a phase 3 double-blind, randomized, placebo-controlled study of the vaccine involving 40,000 volunteers.

EU Reportedly Wants Hundreds of Millions of Doses of Pfizer, CureVac Covid Vaccines for Over $10 Bn

Sputnik V COVID Vaccine Price WIll be Much Lower Than That of Pfizer, Moderna, Developers Say