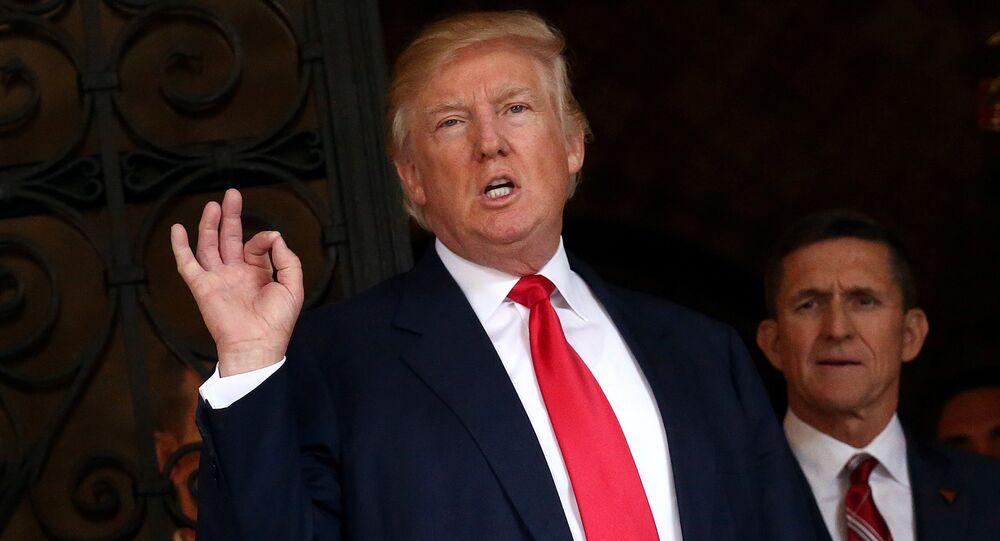 Donald Trump's executive grant of clemency for General Michael Flynn provoked rage among the Democrats, as they continue to stick to the groundless "Trump-Russia" collusion story and will try to imprison the President once he vacates the Oval Office, according to former Ronald Reagan administration official, Dr Paul Craig Roberts.

On 25 November, President Donald Trump granted a full pardon to retired three-star General Michael Flynn who had served less than a month in the capacity of national security adviser in the Trump administration.

"The President has pardoned General Flynn because he should never have been prosecuted," the White House statement concerning the executive grant of clemency reads. "In fact, the Department of Justice has firmly concluded that the charges against General Flynn should be dropped. This Full Pardon achieves that objective, finally bringing to an end the relentless, partisan pursuit of an innocent man."

"The Department of Justice dropped the case against Gen Flynn on the grounds that there was no case," says Dr Paul Craig Roberts, an American economist and former assistant secretary of the Treasury for economic policy under President Ronald Reagan. "A federal judge – Democrat – challenged the DoJ, which doesn’t make any sense, because it is not up to the judge whether or not a prosecutor brings a case. I think to end the mess caused by the judge, Trump pardoned Flynn."

The President's move has been subject to fierce criticism from top Democrats who called it a "brazen abuse of power" and an act of "grave corruption". However, American legal observers say that the Flynn case was heavily politicised from the outset.

Although Democrat leaders argue that the General twice pleaded guilty for lying to the FBI about his talks with the Russian ambassador, they omit the fact that in January 2020, Flynn filed a motion to withdraw his guilty plea. His legal team argued that the prosecutors intentionally hid the exculpatory evidence which could potentially vindicate the military veteran. The motion specifically referred to the prosecutors' "bad faith, vindictiveness, and breach of the plea agreement”. Flynn's lawyers also alleged that the FBI set a "perjury trap" for the former national security adviser to manipulate him into admitting his guilt.

To add to the controversy, a batch of FBI documents, unsealed in April 2020, indicated that the bureau's operation Crossfire Razor targeting the General had found nothing to implicate him in "collusion" with Russia. The case would have been closed had not then-FBI Deputy Assistant-Director Peter Strzok intervened to keep it open. Later, in July 2020, a draft internal government memo dated 30 January 2017 clearly stated that though the FBI recognised "the discrepancy between the statements and actual calls", the agency determined that Flynn "was not acting as an agent of Russia".

#FLYNN Breaking: Draft internal GOV memo 1/30/2017 unsealed by court. Timing: Written 6 days after Flynn interview Kislyak calls, “FBI recognizes the discrepancy between the statements + the actual calls, but determined that Flynn was not acting as an agent of Russia” @cbsnews pic.twitter.com/wXOVGnvz3x

After the declassification of the first batch of the bombshell papers in May, the Department of Justice dropped charges against Flynn concluding that "continued prosecution of this case would not serve the interests of justice". Commenting on the DoJ's decision, Attorney General William Barr clarified that the FBI "did not have the basis for a counter-intelligence investigation against Flynn at that stage."

In response, District Judge Emmet Sullivan authorised "amicus curiae" to challenge the government's position. However, Patrick Borchers, Lillis Family Professor of Law at Creighton University, in Nebraska, suggested in his May interview with Sputnik that "the judge ha[d] no legal authority to interfere in a decision of the Executive Branch as to whether to prosecute an individual".

Trump's clemency order has put an end to the judicial backwards-and-forwards but it does not mean that the case is over, argued Republican Senator Chuck Grassley in his 26 November tweet.

​According to him, the FBI and DoJ's conduct and motivation still raises a lot of questions. The senator indicated that GOP senators ordered Flynn's investigation records to be declassified in a bid to get to the bottom of this story.

The Democrat Party and allies in the Intelligence Community (IC) continue to stick to the "Trump-Russia collusion" narrative which lie at the heart of Flynn's case.

On 10 November, former deputy FBI director Andrew McCabe defended his investigation into the alleged collaboration between the Trump aides, including Flynn, and Russia, claiming that the agency believed that Trump could pose a danger to US national security.

Earlier, special counsel Robert Mueller's investigation found zero evidence to back the claim that Trump or his aides conspired with Moscow, something the US President and Russia resolutely denied from the very beginning. Although Mueller revealed his conclusions in March 2019, that did not prevent Joe Biden's long-time aide and former Pentagon official Colin Kahl to tweet in May 2020 that "Russia had attacked [US] democracy [in 2016]… to help Trump".

Here’s the thing about the Flynn transcripts that people seem to be missing: Russia had just attacked our democracy. They did so to help Trump. Obama hit back. And then Trump’s guy communicates that this should all be water under the bridge so the US and Russia can cooperate.

​If Biden occupies the Oval Office in January 2021, the "Russia collusion" narrative will be presented as "truth" and justified concern, and the fake Steele dossier, manipulations with FISA, and other instances of the IC and DoJ's mismanagement will be called an attempt to "save the country", Dr Roberts deems.

On 24 November, former Mueller team attorney Andrew Weissmann dropped the hint that the Trump-Russia case may be resumed as part of a broader federal probe into the President once he leaves the White House. Weissmann insisted that although Mueller found no evidence to prove ties between Trump and Moscow, he had not "exonerated" the President for the supposed "obstruction of justice".

In addition, top House Democrats have called upon more than 50 federal agencies to preserve all records relating to Trump's term in office (including all the data sent from official and personal devices and accounts), insisting that the White House "obstructed numerous congressional investigations by refusing to provide responsive information" over the four years.

The Democrat camp and their allies then "will try to imprison" Trump, the former Reagan official believes. According to him, the US media will continue to manipulate information, suppressing facts and inflating groundless assumptions about the President's tenure in a bid to stamp out his legacy and vilify his conduct.

"The US does not have a media. It has a propaganda ministry whose function it is to protect the official explanations of the CIA, FBI, and Democratic National Committee (DNC) and to demonise Trump and his supporters as white racists," Dr Roberts concludes.