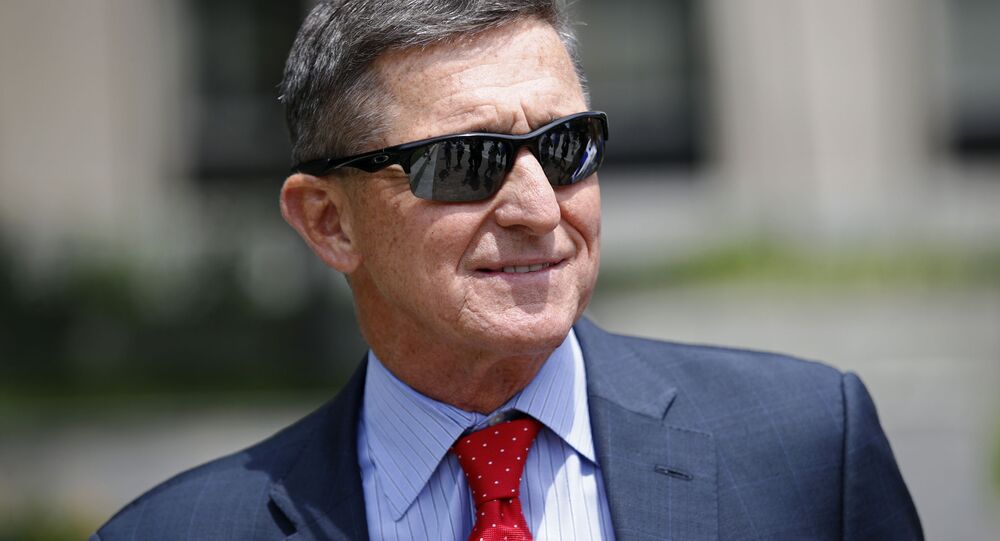 As a result of AG William Barr's decision to review Michael Flynn's case new bombshell documents were unearthed and unsealed on 29 April shedding light on a potential FBI plot against the general. The exposure has triggered new questions about the anti-Trump "spygate" effort by FBI and DOJ officials, says Wall Street analyst Charles Ortel.

The newly unveiled written notes openly ask whether the bureau's goal was "to get" General Michael Flynn "to lie", so that the FBI could "prosecute him or get him fired". The files also indicate that the FBI's operation Crossfire Razor targeting Flynn had found nothing implicating the general in the "collusion" with Russia and would have been closed if then-FBI Deputy Assistant Director Peter Strzok not intervened to keep the case open.

​On 24 January 2017, Strzok and FBI Special Agent Joe Pietka conducted an interview with Flynn, who at that time was Trump's national security adviser, about his December phone talks with Russian Ambassador Sergey Kislyak. The interview played out ugly as in February 2017 Flynn resigned while several months later he pleaded guilty to making "false statements" to FBI agents over his conversation with the ambassador.

Having taken the job of Flynn's defence lawyer in 2019, Sidney Powell, a former federal prosecutor, pushed for the revision of the case despite DOJ prosecutors considering the general's sentencing a done deal. The lawyer argued more dots needed to be connected and requested all the material that could potentially vindicate her client.

Powell argued that the prosecutors intentionally hid the exculpatory information stressing that the purported egregious misconduct by the government would justify the dismissal of Flynn's case by the court. For their part, Justice Department attorneys have repeatedly rebutted Powell's requests as "irrelevant" and even dubbed the defence's supposition that Flynn was targeted by the FBI as part of a broader plot against Trump a "conspiracy theory".

Nevertheless, Flynn's legal team managed to expose a set of inconsistencies in the bureau's handling of the case including edits in the general's FD-302s - forms used by FBI personnel to report or summarise the interviews that they conduct. The newly discovered documents apparently indicate that the bureau intentionally set a perjury trap for Flynn.

​Following the disclosure the general's defence ramped up calls to throw the case out.

#Flynn files #Bombshell motions today: to dismiss for egregious government misconduct and detailing the #ConflictOfInterest
by #Covington that tainted his plea and all proceedings with constitutional error. @BarbaraRedgate@JosephJFlynn1@GoJackFlynnhttps://t.co/Nw20OVogiA

​"More concerning than the perjury trap is that the FBI launched an investigation into a person – Michael Flynn – rather than a crime, under President Obama's watch, and that this evidently unlawful investigation continues to this day", opines Wall Street analyst and investigative journalist Charles Ortel.

"Why does Barack Obama fear Michael Flynn so much? Why do so many people still in the Trump administration obstruct the process of terminating the Flynn prosecution? Let us hope US Attorney John Durham asks and answers these questions", the analyst notes referring to the special investigator appointed by AG William Barr to look into the origins of the FBI's Crossfire Hurricane targeting Donald Trump's aides over their alleged ties with Russian officials.

A year ago Barr clearly articulated his concern that the US intelligence community spied on the Trump campaign during the previous election cycle adding that "spying on a political campaign is a big deal". The newly released documents appear to back Barr's concerns, according to the analyst.

"I suspect Barr's focus has much to do with these and looming revelations", Ortel presumes. "But I question why Barr and the president have not yet replaced FBI Director Christopher Wray and all who had anything to do with the Flynn prosecution and Special Counsel Robert Mueller's probe. The FBI has a stunning array of resources that should be trained on investigating crimes, rather than instigating potential crimes to exact political retribution".

Trump 'Should Consider Full Pardon' of All Deep State Victims

One might hope that FBI agents involved in the alleged framing of General Flynn as well as their backers will be held responsible, according to Ortel.

"Across the political spectrum, most thoughtful people must demand full disclosure of the extent to which FBI and other 'public servants' crossed a key line to become political hit men and women", he highlights. "The FBI is supposed to investigate objectively and apolitically, while the Department of Justice is supposed to uphold the law, neutrally".

According to him, "under Robert Mueller, James Comey, and Christopher Wray at the FBI, and under Eric Holder, Loretta Lynch and Jeff Sessions at the Justice Department, corrupt political motives seem to have overwhelmed obligations to support and defend the US Constitution".

In the aftermath of the recent disclosure Donald Trump suggested that the newly unveiled documents “essentially exonerated” Michael Flynn.

"They tormented him – dirty cops tormented Gen. Flynn", Trump told reporters on 30 April. "If you look at those notes from yesterday, that was total exoneration".

The president earlier signalled that he was "strongly considering pardoning" former national security adviser Michael Flynn. One might wonder whether it's time for the president to pick up this option. According to Ortel, Trump "should consider full pardons for all targets of any Mueller instigated prosecutions as these seem to have started in the absence of solid predicates of criminal activity".

As for Flynn, the analyst hopes that Barr "would direct prosecuting attorneys to cease their efforts, while referring any evidence of criminal behaviour by prosecutors in the Flynn case to new teams of prosecutors who then should seek indictments". He believes that such a path might be deemed a form of exoneration.

"General Flynn and many others have suffered too much for too long", Ortel says. "President Trump and Attorney General Barr must unequivocally prove that government employees will suffer grievous punishment when they subvert the rule of law to serve corrupt political masters".