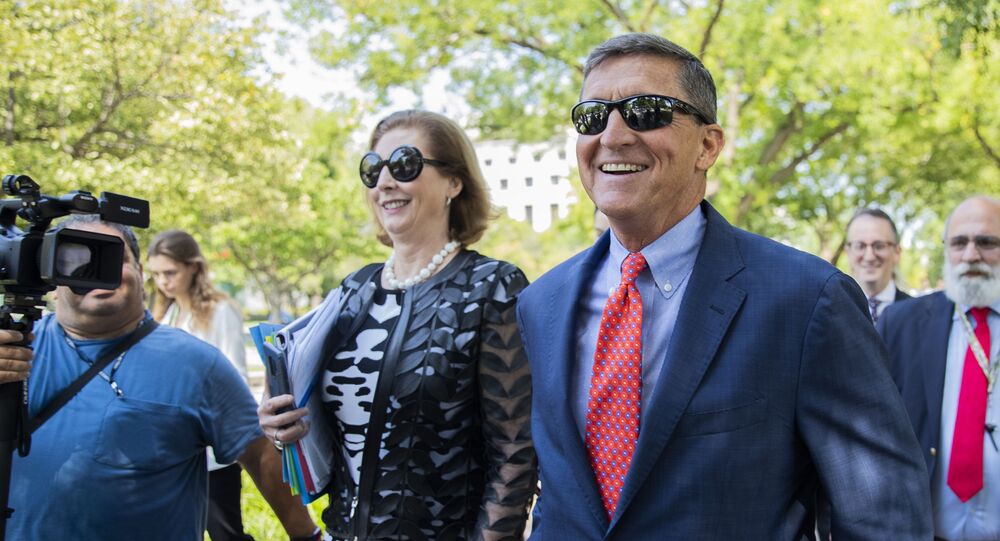 As the sentencing date for National Security Adviser Army Lt Gen Michael Flynn, scheduled for 18 December 2019 nears, the general's legal team is arguing that his case is still far from being resolved. Wall Street analyst Charles Ortel and a US lawyer known by the alias Techno Fog have explained the sudden shift in litigation.

Flynn's new lead defence attorney Sidney Powell – a former federal prosecutor and author of Licensed to Lie: Exposing Corruption in the Department of Justice – signalled in federal court on 10 September 2019 that she may seek a dismissal of the general's charges over lying to the FBI citing egregious misconduct and suppression of possibly exculpatory evidence by government prosecutors.

On 30 August, Flynn's legal team filed the "Motion to compel the production of Brady Material* and for an order to show cause" requesting internal texts, emails, recordings and notes that could potentially vindicate the defendant. The move came in response to a prosecutors' status report saying that the Flynn case is ready for sentencing, submitted on the same day.

According to Powell's Brief in support of the motion, the prosecutors "affirmatively suppressed evidence (hiding Brady material) that destroyed the credibility of their primary witness, impugned their entire case against Mr Flynn, while at the same time putting excruciating pressure on him to enter his guilty plea and manipulating or controlling the press to their advantage to extort that plea".

She argued that "they continued to hide that exculpatory information for months – in direct contravention of this Court's Order".

Flynn's legal team say that the government's prosecutors continue to suppress exculpatory evidence to this day. In the event the Department of Justice does not provide the materials in question, the government’s egregious conduct will justify the dismissal of Flynn's case, according to Powell.

According to Techno Fog, a Twitter alias for a lawyer who has been looking into Flynn's case for quite a while, Powell's concerns are quite justified.

The lawyer emphasises that "under the court's standing order, the government is required to produce any evidence 'material either to [Flynn's] guilt or punishment'. However, despite that order, the government prosecutors have so far refused to produce not only the original (or first draft) of the FBI 302 of the 24 January 2017 interview of Flynn by McCabe and Strzok but also the transcript of the general's call with Russian Ambassador Kislyak. Both documents constitute highly valuable 'material evidence'", Techno Fog argues.

"It's obvious that the government isn't timely producing the required Brady materials", the lawyer says citing the fact that it took almost a year and a half for the prosecutors to prepare 330 pages of "significant Brady evidence". It appears that they don't want to produce anything else, Techno Fog adds.

The Gov't has filed their response to the @SidneyPowell1 Motion to Compel Production of Brady Material in the Flynn case.

Refuses to produce any other evidence; requests to go right to sentencing.https://t.co/2DrB4vf2SW

​On 1 October, Justice Department attorneys Brandon Van Grack, Jocelyn Ballantine and US Attorney for the District of Columbia Jessie Liu filed a rebuttal in response to the Flynn legal team's information requests, claiming that they are "either irrelevant or seek information that has already been provided" to them.

In responding to @SidneyPowell1 motion to show cause & compel production of Brady material, Mueller prosecutor Brandon Van Grack hints that @GenFlynn cooperation agreement req. turning over any comms sent to Flynn by ppl trying to help his defense, including from Congress

​It is expected that no later than 22 October the defendant will reply or, possibly, file a new motion.

Judging from the materials requested by Powell, which include, for example, records and notes by DOJ official Bruce Ohr and author of dodgy anti-Trump dossier Christopher Steele, the defence sees the Flynn case in the context of "spygate" against Donald Trump and his team, i.e. allegedly illegitimate spying and framing of Trump's associates by the US intelligence community during the 2015/2016 election cycle and beyond. This particular case is now being investigated by Attorney General William Barr and Attorney John Durham.

Wall Street analyst and investigative journalist Charles Ortel does not rule out that Michael Flynn has long been chased by Obama administration officials and the intelligence community and "had a target on his back long before 2016".

"In considering the Michael Flynn case, one must remember that Flynn seriously offended Barack Obama and his senior staff with his withering criticisms before and after serving as head of the US Defense Intelligence Agency (DIA). Moreover, Obama even went as far as warning Donald Trump not to hire Michael Flynn", Ortel says.

According to the analyst, to understand the prosecution of Flynn and ongoing resistance to Donald Trump and his administration, one must go way back and examine "many under-reported, true scandals that did occur under President Obama’s watch", including controversial Operation Fast and Furious, IRS abuse against conservatives, Uranium One, the Libya/Benghazi case, failures to heed warnings about the Tsarnaev Brothers, and the rise of Daesh (ISIS/ISIL)** in Iraq and Syria.

Ortel suggests that top-ranking Obama officials involved in the abovementioned scandals are well aware that they could be held accountable under the Republican administration for their supposed misconduct.

"[Flynn] was thought to be easily intimidated, given his weak financial condition", the analyst notes. "When he accepted his plea deal, I believe he did so primarily considering how expensive it might be to fight the government, and then how calamitous it might have been had he shouldered additional expenses only to lose. By all means, Powell should continue pressing for exculpatory materials".

For instance, the 24 January 2017 interview of Flynn by two FBI agents sparked a lot of controversy. In his December 2018 article for the National Review, Andrew C. McCarthy, former Assistant US Attorney for the Southern District of New York, outlined that while McCabe and Strzok's "aggressive tactics" had not violated the law, the FBI had not treated Flynn fairly:

·         "If the FBI wanted to interview him on 24 January 2017, a request should have been communicated to the White House counsel by the Justice Department", he wrote adding that the intelligence agents "intentionally avoided going through proper channels".

·         The agents "actively discouraged [Flynn] from notifying the White House counsel" which left the general without a lawyer on hand during the interview.

·         If the real point of the interview was for the FBI to understand the Flynn-Kislyak phone conversations, arrangements would be made for the FBI "to play the recordings for Flynn".

·         "If the FBI said it did not want to play the recordings for Flynn, just to ask him about them… very likely, the interview request would have been rejected" by the White House counsel, McCarthy underscored.

According to Ortel, the handling of the Flynn case differs from how the FBI treated former Secretary of State Hillary Clinton over her unsecured email server and potential compromising of classified government materials as well as the supposed large-scale fraud and corruption involving the Clinton Foundation.

"I know Sidney Powell personally, and have huge respect for her intellect, her legal acumen, and her determination to uphold the rule of law under the US Constitution", the Wall Street analyst notes. "I hope [she] will try ever harder to re-balance the scales of justice and that President Trump and William Barr are watching these cases closely".

On 1 December 2017, Flynn pleaded guilty for making false statements to then FBI Deputy Director Andrew McCabe and then Deputy Assistant Director Peter Strzok about his 22 December 2016 phone conversation with Russian Ambassador Sergey Kislyak. Strzok was fired from the FBI in August 2018, soon after his disparaging texts about Trump were disclosed.

The general, who became the fourth person charged in Special Counsel Robert Mueller's probe, agreed to cooperate with federal prosecutors. In early December 2018, Mueller announced that Flynn had given "substantial assistance" to the Trump-Russia investigation and recommended no prison time for the former national security adviser. In March 2019, the special counsel concluded that no evidence of collusion between the Trump campaign and Russia had been found.

*The Brady doctrine is a pretrial rule that obligates a prosecutor to turn over exculpatory or impeaching information and evidence that is material to the guilt or innocence or to the punishment of a defendant. If a prosecutor withholds Brady material a defendant’s rights to due process under the US Constitution are violated. The doctrine originates from the Supreme Court’s 1963 case Brady v. Maryland.

**Daesh (ISIS/ISIL) is a terrorist organisation banned in Russia and many other countries.