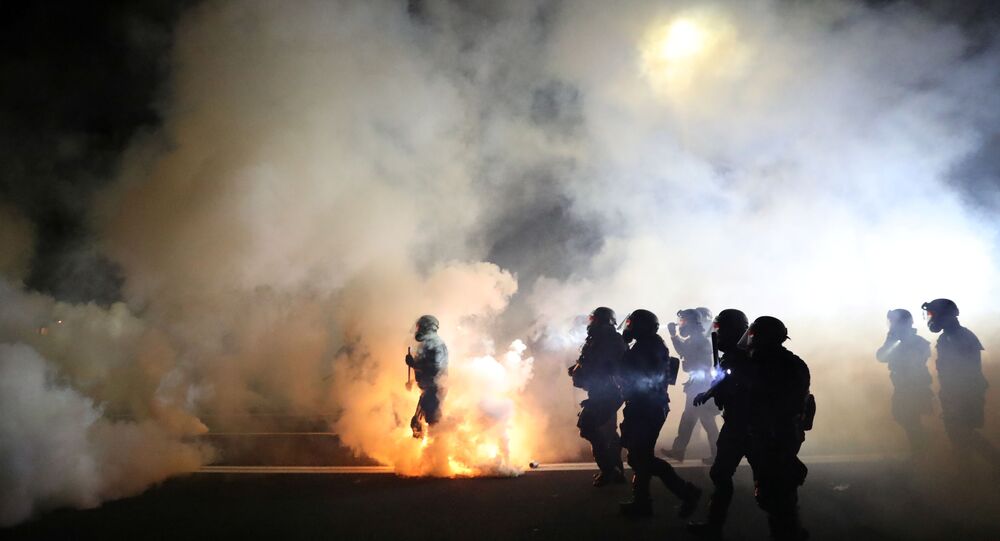 More than half of voters surveyed in the poll said they thought the Portland protests had been mostly violent, and only a minority thought they helped black people. Opinion of both Democratic and Republican political leaders was poor.

Two-thirds of voters in the US state of Oregon oppose nightly Black Lives Matter (BLM) protests in the state capital Portland.

New polling by DHM Research found that only 31 per cent of citizens approved of the protests against police brutality, which the majority view as violent and unhelpful to black people or race relations.

Support for the demonstrations was slightly higher among Portland residents at 61 per cent, but the only demographic group to show majority support were voters aged 18-29 - those least likely to participate in elections, with youth turnout averaging around 30 per cent over the last four decades. Approval among black residents was 49 per cent, with 46 per cent opposed.

More than half of respondents believed the more than three months of unrest had been harmful to race relations, with 38 per cent calling the effect "very harmful", while only 23 per cent saw it as helpful. Only 29 per cent thought the protest actually helped black Portlanders, although that figure was just over half among black and youth voters.

While most believed the protests had been "mostly violent" compared to 36 per cent who thought them "mostly peaceful", approval of the Portland Police Department's softly-softly response was about evenly split. And just 29 per cent thought the police had bean too heavy-handed, compared to 42 per cent who said they had not used enough force.

Opinion of the political handling of the unrest was negative across the board. Some 51 per cent "strongly disapprove" of Republican President Donald Trump, who sent heavily-armed federal law enforcement officers to protect government buildings in the city.

But Democrat Portland mayor Ted Wheeler and had were almost as unpopular with voters, and they even garnered fewer positive approvals than Trump.

The latest wave of Black Lives Matter protests were sparked by the May 25 death of George Floyd, who suffocated as Minneapolis police officer Derek Chauvin knelt on his neck after he was arrested for trying to pass a counterfeit banknote.

The phenomenon has been politicised in run-up to the November 3 presidential election, with Democratic candidate Joe Biden accusing Trump of "fanning the flames of hate" and provoking the rioting, and Trump in turn calling Antifa groups who have joined the protests "terrorists" and warning voters they "won't be safe" if Biden wins.