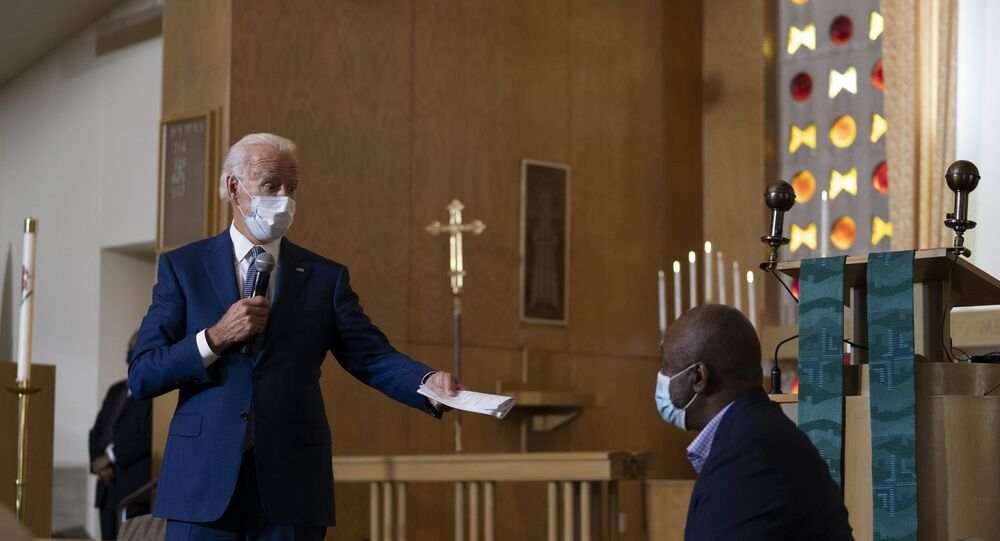 Democratic presidential nominee Joe Biden was in Wisconsin Thursday to meet with members of the Kenosha community following the police shooting of 29-year-old Black man Jacob Blake on August 23.

Biden and his wife Jill arrived at the Mitchell International Airport on Thursday and privately met with members of Blake's family for about an hour, the Washington Post reported. Blake also joined the meeting virtually by phone from his hospital bed, his attorney, Ben Crump, confirmed, as he has now been removed from intensive care.

"The family was grateful for the meeting and was very impressed that the Bidens were so engaged and willing to really listen," Attorney Ben Crump said in a statement obtained by the Washington Post.

"Jacob’s mother led them all in prayer for Jacob’s recovery. They talked about changing the disparate treatment of minorities in police interactions, the impact of selecting Kamala Harris as a Black woman as his running mate, and [former] Vice President Biden’s plans for change. Mr. Blake Sr. talked about the need for systemic reform because the excessive use of force by police against minorities has been going on for far too long. Jacob Jr. shared about the pain he is enduring, and the vice president commiserated,” Crump added.

“The vice president told the family that he believes the best of America is in all of us and that we need to value all our differences as we come together in America’s great melting pot. It was very obvious that Vice President Biden cared, as he extended to Jacob Jr. a sense of humanity, treating him as a person worthy of consideration and prayer,” Crump continued.

"He talked about how nothing was going to defeat him how whether he walked again or not he was not going to give up," Biden said of his conversation with Blake, according to WISN 12.

Biden later met with other members of the Kenosha community at Grace Lutheran Church.

“No president’s ever going to say ‘they’re very fine people on both sides,’” Biden said at the church, referring to Trump's comments about violent clashes between far-right protesters and anti-fascist counterprotesters in Charlottesville, Virginia, in August 2017 that left a female counterprotester dead. “No president has ever said anything like that ... It legitimizes the dark side of human nature.”

Biden’s visit comes two days after Trump made his own trip to Kenosha alongside Attorney General William Barr to meet with law enforcement officers following his dispatchment of more than a thousand national guardsmen and federal officers to crush protests in the city. Kenosha has been the scene of protests ever since Blake was shot by police in late August.

“These are not acts of peaceful protest but, really, domestic terror,” Trump said on Tuesday, AP reported.

Trump’s visit came against the explicit request of Wisconsin Governor Tony Evers, who asked the president to “reconsider” his trip. Trump did not meet or speak with the Blake family, as they insisted a lawyer be on the phone with them during the call, a condition Trump refused.

Blake was shot four times in the back by Officer Rusten Sheskey, who fired a total of seven bullets toward Blake during a roadside confrontation. Blake is now paralyzed below the waist.