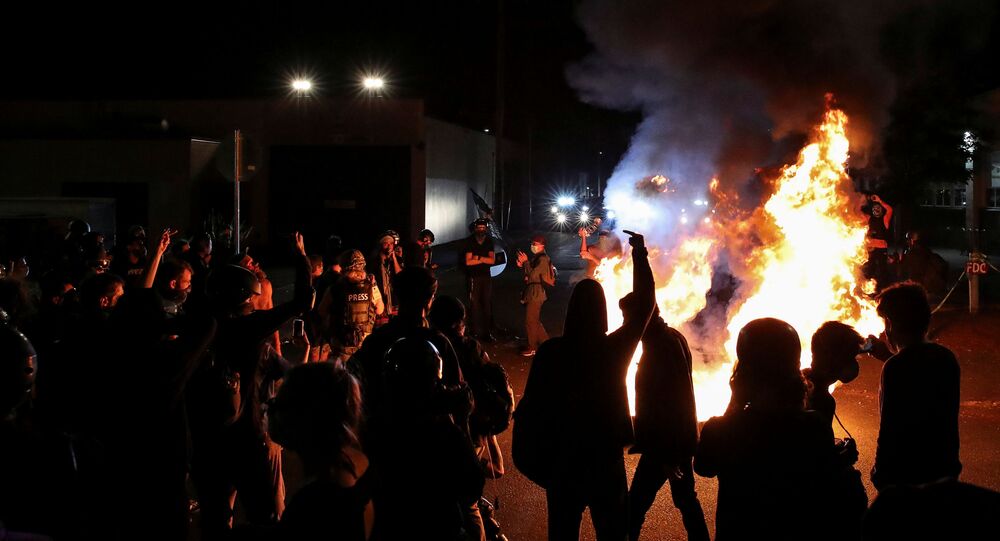 On Saturday, hundreds of demonstrators took to the streets of Portland and clashed with police as the US city marked its 100th night of protests against police brutality prompted by the death of an African American man George Floyd in May.

US President Donald Trump has made sarcastic remarks about Portland protesters, also sharing a video of a demonstrator who accidentally set himself on fire during recent clashes with police.

"These are the Democrats 'peaceful protests'", Trump tweeted on Sunday, retweeting the clip of the protester trying to put out the blaze caused by a Molotov cocktail.

The comment came after Portland Police said in a statement on 6 September that "fire bombs were thrown at officers, injuring at least one community member", with policemen trying "to restore peace and order for the safety of this neighbourhood".

These are the Democrats “peaceful protests”. Sick! https://t.co/8NpRepi8UY

Police also said that during the Sunday demonstration, protesters had thrown firebombs, rocks, and other items at law enforcement officers, prompting them to declare the situation a riot and disperse the crowd.

At least 59 people were also arrested as Portland entered Day 100 of ongoing protests against racial injustice and police brutality.

The developments were preceded by Trump posting a series of tweets late last month, in which he lashed out at Portland Mayor Ted Wheeler, denouncing his response to the civil unrest.

POTUS berated Wheeler for watching the "great death and destruction of his city during his tenure", and claimed that "the only way you will stop the violence in the high crime Democrat run cities is through strength".

Trump also pledged to "go in and take care of matters the way they should have been taken care of 100 days ago" in the event that Wheeler "does not get control” of Portland.

© REUTERS / TERRAY SYLVESTER
Protester Suspected in Portland Shooting Killed by Officers During Arrest, Reports Suggest
Wheeler has repeatedly rejected Trump's offer of federal agents, accusing the US president of pulling a political stunt, and asserting that "we don't need your politics of division and demagoguery".

POTUS has several times offered a deployment of federal agents to Portland, referring to Kenosha, Wisconsin, which also saw riots after a white police officer shot a black man, Jacob Blake, in the back. Trump asserted that as soon as the National Guard entered the city, the violence stopped.

The US has been rocked by a wave of protests against racism and police brutality since late May, when a black man, George Floyd, was killed by a white police officer while in custody in Minneapolis.

Since then, cities all over the US have seen massive demonstrations, some of which have turned violent and resulted in arson, looting, and clashes with heavily armed police.