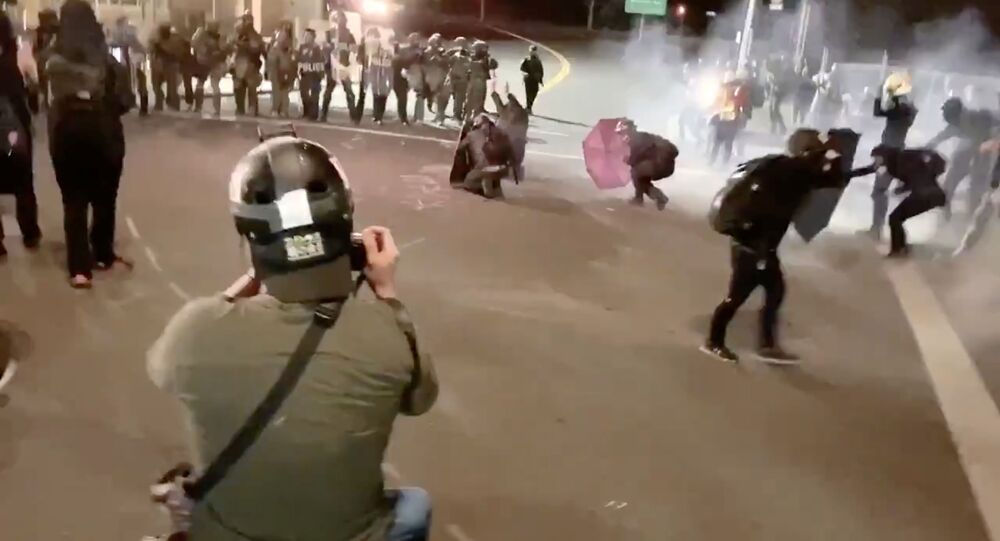 The Portland Police Department declared an “unlawful assembly” in the small hours of Saturday morning after three hours of attacks by protesters.

Nine arrests were made after a crowd of up to 200 people marched on the city’s North Precinct Community Policing Center on Friday night, inflicting “heavy damage to police cars and injuries to officers” according to a police statement.

"Almost immediately the officers were targeted by thrown bottles, eggs, and green lasers toward their eyes” powerful enough to cause permanent damage to sight", the statement said.

The police attempted to “de-escalate” the confrontation by retreating out of sight of the rioters.

But despite loudhailer warnings, the crowd “pelted the police vehicles with softball-sized rocks, glass bottles, golf balls, ball bearings, metal railroad spikes... and plastic eggs filled with paint.” for the next three hours.

"There were also balloons filled with feces thrown on the cars and even a torn up street sign was used to vandalise the marked police cars" that officers had parked on the southwest side of the precinct to keep the crowd away from the building.

A fire was lit in the middle of Northeast Martin Luther King Junior Boulevard and was fed with plastic recycling bins, newspaper boxes, various other debris and finally an entire dumpster.

The statement noted that there had been attempts to burn down the police precinct at previous demonstrations.

The statement said the rioters included some with "press" markings on their clothes, one of whom was witnessed deflating a tire of a police car.

Just after 1am the police finally declared the protest an unlawful assembly in a warning to  rioters.

Of those detained, the youngest was 18 and the oldest was 46.

Presidnet Donald Trump was quick to tweet his condemnation of the unrest, urging the opposition Democrat-controlled city council to call in the National Guard and "STOP THE RIOTS".

Donald Trump Jr. seized on the event to make political capital, tweeting: “If democrats win you too can have this BS coming to your suburbs. It’s up to you.”

Another user wryly pointed out that the protesters were only driving voters into the arms of the Republican party:

​A separate protest outside the city’s Immigration and Customs Enforcement (ICE) headquarters late on Thursday into early Friday saw three arrests. Demonstrators chanted: “No cops, no KKK, no fascist USA.”