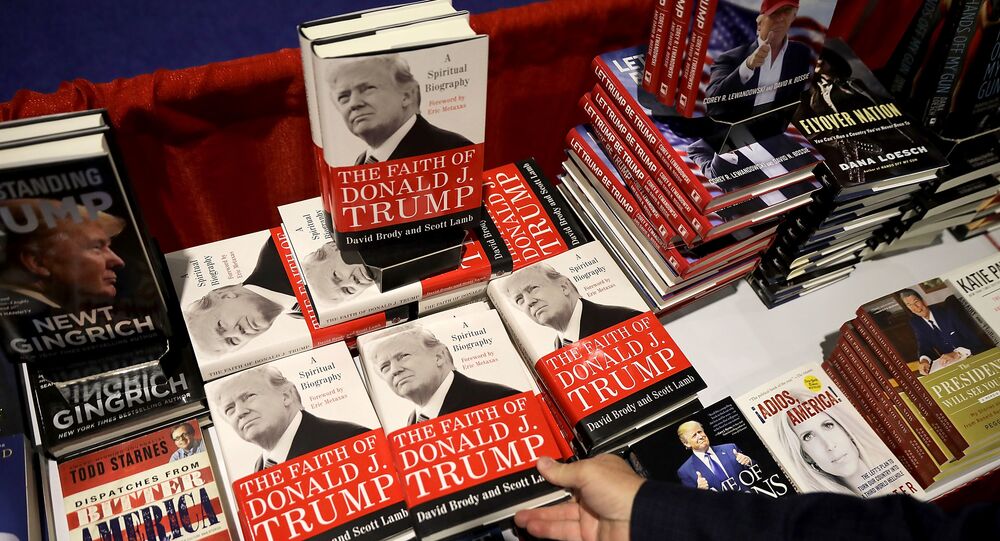 Authors and publishers of books about Donald Trump have enjoyed a bonanza since the beginning of his presidency. Exposés, panegyrics, insider accounts, and memoirs are selling like hot cakes, regardless of political bias and attitudes towards the incumbent. American observers have explained the phenomenon.

In early September, two tell-alls about the US president and his family hit the shelves: one by Stephanie Winston Wolkoff, a former friend and aide to First Lady Melania Trump, and the other by Michael Cohen, a disbarred American lawyer and former Trump attorney. Yet another opus, laconically titled "Rage", is due to come out on 15 September and shed light on Trump's handling of the coronavirus pandemic and Black Lives Matter protests, among other issues. The author, investigative journalist and two-time Pulitzer Prize winner Bob Woodward, has already cashed in on his first Trump exposé, "Fear", which sold 1.1 million copies across all formats in the first week of its release in September 2018.

Citing an analysis by NPD BookScan, The New York Times summed up that there have been more than "1,200 unique titles about Mr. Trump" over the four years of his presidency, while roughly 500 books were written about his predecessor, Barack Obama, during the latter's first term. Unexpectedly, US Constitution sales have also soared under Trump, as an apparent by-product of the unfolding political book boom, the media outlet remarked.

Why Does the Trump Name Sell Fast?

"Trump is an extremely divisive person and the country has rarely been so polarised," says George S. Kazolias, a veteran US journalist, media trainer, and consultant. "Trump has brought reality TV into the real world and people on both sides are obsessed with every episode. This makes for a good market to sell literature, whether dirt or praise, and there is plenty of both. There is sex, scandal, money, treason, collusion, foul language and low blows. What is there not to like?"

There is no doubt that Trump has become a unique figure on the US political arena, according to Kazolias. The president's base is solid and appears to "turn their gaze away from Trump’s obvious faults to fixate on the opposition—the great ‘whataboutism’ deflection". But this attitude is not limited to the Trumpers alone, he notes:

"Trump often says or does things that the left and progressives should agree with but choose to ignore such as calling the military brass 'warmongers' who work for the 'arms dealers' or denouncing the hypocrisy of politicians who take money from the rich, as just two examples," the journalist says, adding, however, that it does not prevent the Trump administration from stepping up the military budget and cutting taxes for the wealthiest.

Brendan McDermid
Michael Cohen, the former lawyer for U.S. President Donald Trump, arrives back at home after being released from prison during the outbreak of the coronavirus disease (COVID-19) in New York City, New York, U.S., May 21, 2020

Are the Authors Anti-Trump Campaigners or Opportunists Cashing in?

Writers of all ranks and party affiliations have capitalised on these apparent controversies while describing the president. The 2020 summer season was marked by the release of the Trump-bashing memoir "The Room Where It Happened" by former National Security Adviser John Bolton, which faced a legal challenge from the Justice Department and prompted a big media fuss with excerpts of the opus leaked before it appeared in bookstores.

Family chronicle "Too Much and Never Enough" by Mary L. Trump, the president’s niece, added to the unflattering depiction of the US president. Both became bestsellers and both were denounced by Trump: the first one for being written by "a warmongering fool", the second one for being compiled by "a seldom-seen niece who knows little about [him]".

....will all end up going to the government anyway. Next up is Mary Trump, a seldom seen niece who knows little about me, says untruthful things about my wonderful parents (who couldn’t stand her!) and me, and violated her NDA. She also broke the Law by givng out my....

​"What has been the motivation of these authors?" asks William Dunkerley, author and media business analyst. "I have no special insights into their thinking. But there are two characteristics that are shared by them. First of all, they are disgruntled with Trump for their own personal reasons. Secondly, they are writing propitiously during an intense time in the 2020 presidential season."

Amazingly, the authors of these so-called revelations are mostly those who once gladly took a position supporting the president and worked with him until they were either fired or arrested, remarks Don Debar, a US political analyst.

"Given this, it is curious - to be kind - that it was only in hindsight that the behaviour they claimed to witness offended them enough to speak out, particularly in the form of a widely-publicised book," he underscores.

It's hard to say whether the Trump book authors are opportunists who are cashing in on today's high interest in Trump or just playing into the hands of those who seek to prevent the incumbent from serving a second term, according to Dunkerley, who believes that they may fit into both categories.

"The tear-down-Trump books fit neatly into a campaign to denigrate Trump that began as soon as he was elected," he acknowledges. "It involves more initiatives than publishing books. Highly strategised oppositional activities began right after the [2016] election. Throughout this period, the publication of books played a visible role."

Pro-Trump Books Have Had Success Too

Still, not all hot-selling opuses are negative towards Trump: citing Thomas Spence, president of Regnery Publishing, which publishes conservative books, The New York Times admitted that pro-Trump books have had a lot of success too.

Reviewing the titles supportive of the president's politics, the newspaper names Edward Klein’s “All Out War: The Plot to Destroy Trump”, Lee Smith’s “The Permanent Coup”, Gregg Jarrett’s “The Russia Hoax: The Illicit Scheme to Clear Hillary Clinton and Frame Donald Trump”, and David Horowitz’s recent book “BLITZ: Trump Will Smash the Left and Win”.

"Of course, there are pro-Trump books as well," says William Dunkerley, suggesting that they may still be not be as successful as anti-Trump opuses. "One such is 'The Case for Trump' by Victor Davis Hanson. It was published in March 2020 and currently ranks 3,819 on the best sellers list."

He expects that there will be more pro- and anti-Trump books to come out before Election Day in November.

Will the Trump Book Boom End After the November Vote?

With just 60 days left before the 2020 election, it remains unclear as to how positive and negative narratives may influence the US voters' behaviour. The second question is whether the Trump book-selling bonanza will continue after the vote.

"Given the divisiveness of Trump, and the solid lines drawn between the two camps, I’m not sure the books will make much of a difference in the way people vote," George S. Kazolias opines. "There are few sitting on the fence when it comes to Trump and it is those few who will make the difference on 3 November."

Readers' interest towards Trump is unlikely to wane even if Biden comes out on top, the veteran journalist presumes. If Trump loses one would see lots of news ink exposing his "wrong-doings", while further down the road historians may show that many of Trump’s positions on border security, trade policies and NATO were not as bad as they were depicted, he predicts. If Trump wins, the partisan standoff is likely to continue, triggering many more exposes and bombshell stories, according to Kazolias.