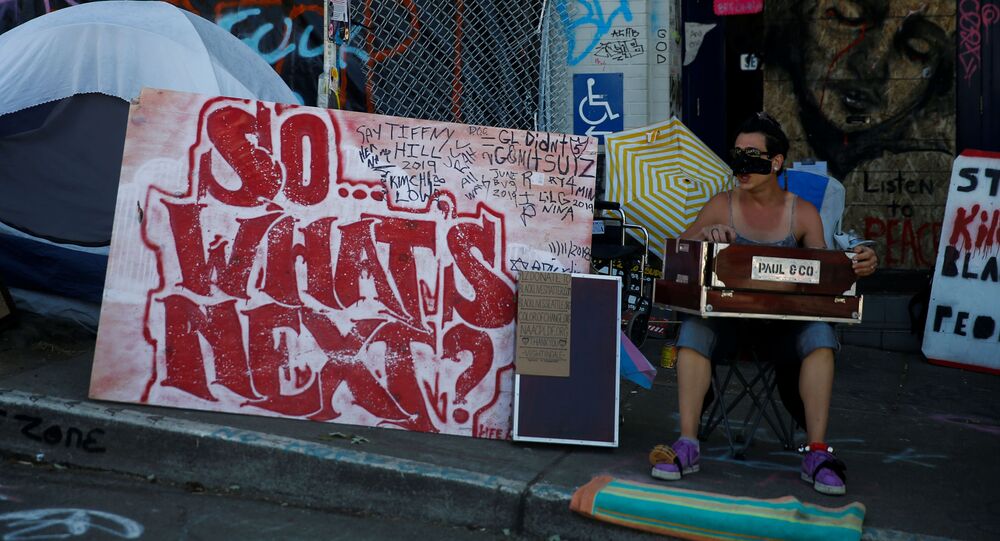 After a so-called “autonomous police-free zone” was established in Seattle in the wake of George Floyd’s death on 8 June, the city’s mayor Jenny Durkan referred to it as a “peaceful expression” of the community’s grief. But the zone has since seen a series of shootings.

The order was issued on 30 June to respond to “reported life safety, public health and property issues” around the CHOP area that has been occupied by demonstrators since 8 June, after the Seattle police withdrew from the Capitol Hill district, leaving the Department's East Precinct building behind.

The move was made as a part of efforts to ensure "trust” and to de-escalate ongoing tensions with protesters, but was harshly criticised by President Trump, who branded the demonstrators in the zone as “anarchists”. On 11 June, Jenny Durkan claimed that CHOP was “not a lawless wasteland of anarchist insurrection” but rather “a peaceful expression of our community’s collective grief”.

However, since then, a series of shootings have occurred in the area leading to several fatalities and injuries. On Monday, the Seattle Police Department confirmed that a 16-year-old male was killed in a shooting that erupted near the CHOP area earlier in the day.

On Wednesday, Seattle Police Department confirmed on Twitter that the area is going to be cleared in accordance with the Mayor’s order “due to ongoing violence and public safety issues in the East Precinct/Cal Anderson Park area”.

Due to ongoing violence and public safety issues in the East Precinct/Cal Anderson Park area. Mayor Jenny Durkan has issued an executive order to vacate the area. Seattle police will be in the area this morning enforcing the Mayor’s order. https://t.co/SpVRYIB8eg pic.twitter.com/JAt2AvUTCr

“Anyone who remains in the area, or returns to the area, is subject to arrest”, the police added later.

According to the most recent police information, 23 arrests have been made in the area “for failure to disperse, obstruction, resisting arrest, and assault”. Numerous videos and photos were shared on social media confirming the officers’ efforts to completely clear the CHOP area.

As of 7:45 AM, officers have made 23 arrests in the #CHOP zone for failure to disperse, obstruction, resisting arrest, and assault. One of the arrestees, a 29-year-old man, was in possession of a large metal pipe and kitchen knife when he was taken into custody. pic.twitter.com/12qT7psBQQ

#chaz #chop #seattle is finally being cleared out.

About time! Too late though.

I hope they investigate the execution of the unarmed black 16 year old and the critical wounding of his 14 year old friend. pic.twitter.com/2zrhARgJXn

And just like that, at 5am, #CHOP is closed. #seattleprotest #CHAZ pic.twitter.com/gVWsrhua0d

More than a half dozen people cuffed and escorted from #CHOP in Seattle in the last 20 min. #komonews pic.twitter.com/6IdaALnUfB

#UPDATE: First look at the #CHOP zone since Seattle Police cleared it out this morning.

Dozens of tents and lots belongings left, but all protestors have been cleared out. @KIRO7Seattle pic.twitter.com/dULugXBtBz