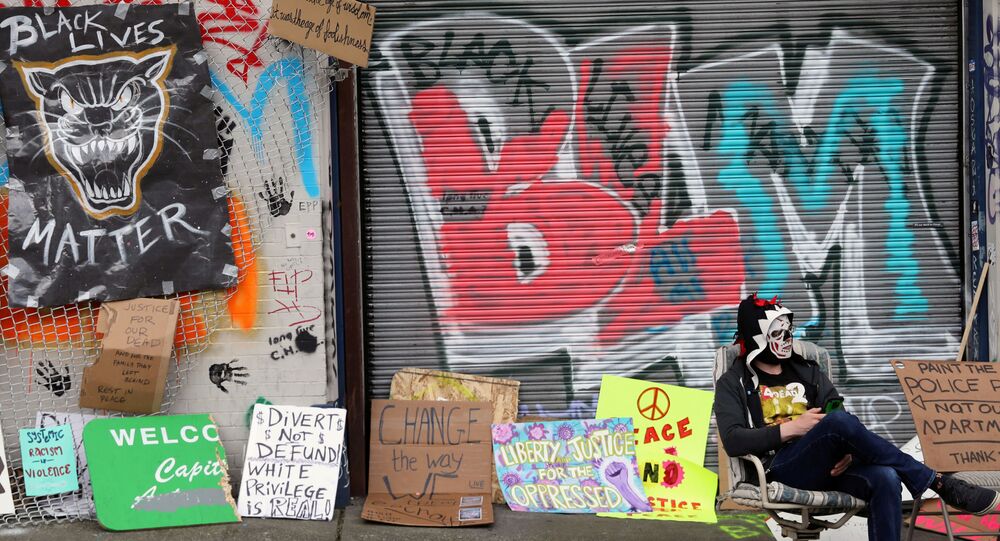 On 8 June, George Floyd protesters seized a several-block area in Seattle to create an “autonomous police-free zone” after law enforcement officers retreated from Capitol Hill. On Saturday night, a shooting in the zone resulted in the death of one man and left another with critical injuries.

New incidents of shooting have been reported in Seattle’s protesters-led “autonomous zone”, also referred to as the “Capitol Hill Occupied Protest” (CHOP), on Sunday night, according to the New York Times.

According to a spokeswoman at Harborview Medical Center, Susan Gregg, one person was brought to the medical establishment by private vehicle after being shot in the area. The injured person remains in a serious condition, the media reported. The incident, as well as unconfirmed reports of another shooting, are currently being investigated by the Seattle Police Department.

Police investigating reported shooting inside CHOP zone. One person at HMC with gun shot wound. Hearing reports of a second shooting, but have not be able to verify at this time. Conflicting reports, will update with more information when available.

A CCTV video, allegedly showing the instance of gunfire on Sunday night, has been circulating online.

Video shows people running after gunshots are heard in the Seattle #CHOP a little over half an hour ago. #Seattle #Shooting pic.twitter.com/2qDaAk8pGM

​The purported incident has also been caught on camera by Twitch streamer Shawn Whiting, who was reportedly in the area when the violence broke out.

If people want to see what happened please only link back to the original video here: https://t.co/7nAsWHAc50

I feel its important to keep the orig video up because I've seen news and other channels actually editing elements into my footage in other CHOP videos.

On Saturday, a separate incident of shooting was reported in CHOP. One person, a 19-year-old man, was killed while another was critically wounded.

The self-proclaimed autonomous zone was established at the start of June by demonstrators protesting against the police brutality in the wake of George Floyd’s death. On 8 June, Seattle police withdrew from the Capitol Hill district, while leaving the Department's East Precinct building behind, as an act of "trust and de-escalation” after days of clashes with demonstrators.

© Photo : @ElijahSchaffer
Protesters Hold Down Preacher in Seattle's 'Autonomous Zone' - Video
The protesters then surrounded the area with barricades and declared it a police-free zone. Seattle Police Department's Chief Carmen Best later said that leaving the East Precinct was not her decision.

Shortly after that, US President Donald Trump branded the protesters in the zone “anarchists” and harshly criticized the Mayor of Seattle Jenny Durkan and Washington Governor Jay Inslee for their inaction. Durkan said on 11 June that the zone was “not a lawless wasteland of anarchist insurrection” but rather “a peaceful expression of our community’s collective grief”.