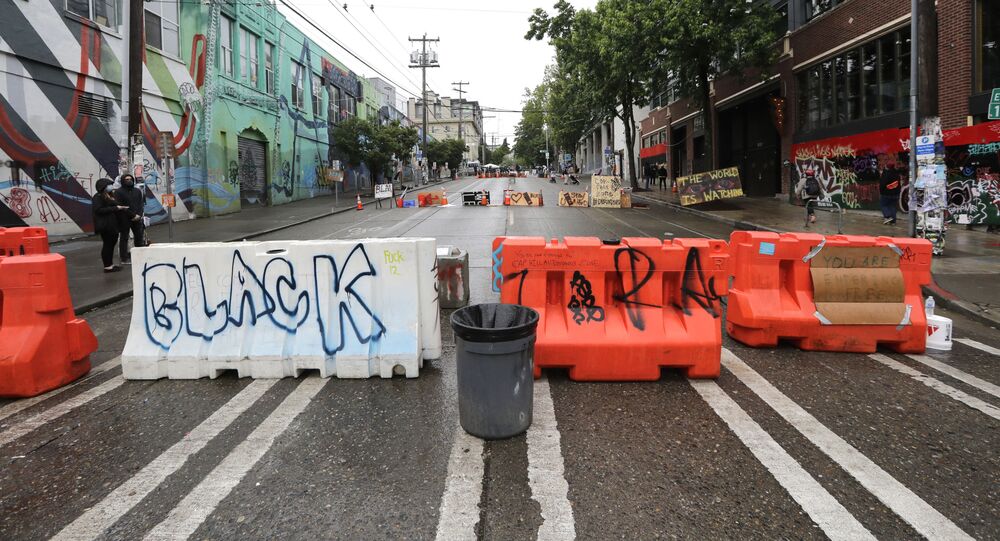 Protesters have set up barricades around the abandoned Seattle Police Department's East Precinct after police retreated from Capitol Hill on Monday in what was approved by the city mayor as an act of "trust and de-escalation".

Seattle Mayor Jenny Durkan and police chief Carmen Best appear to disagree on how to handle the so-called "Capitol Hill Autonomous Zone", or "CHAZ", set up by protesters around the East Precinct.

Over the course of the events, Dunkan and Best have given contradicting statements concerning the "CHAZ". Durkan has described the establishment of the "Cops Free Zone" as an act of "patriotism", signaling that she sees the situation as quite positive.

"Lawfully gathering and expressing First Amendment rights, demanding we do better as a society, and providing true equity for communities of color is not terrorism. It's patriotism", the mayor said at a press conference.

Best has several times signaled she was not happy with the situation, adding that it was not her decision to abandon the police station and leave it to protesters. The SPD chief said that the city "relented to severe public pressure" and that she was "angry about how this all came about".

However, on Thursday, Durkan and Best appeared at a joint press conference where they confirmed their faith in each other.

At the same time, the Seattle mayor has faced criticism from law enforcement officials, as well as from President Donald Trump, who threatened to take action himself if she did not establish order in the city. Following Durkan's response that Seattle "could have a summer of love" if the "CHAZ" remains in place, Trump reiterated his pledge to "take back" Seattle from protesters, whom he accused of being anarchists.

​None of the organisers who initiated the "CHAZ" have been identified so far, while the city authorities have failed to negotiate the police's return to the precinct.

Best has pointed out that at the moment, police cannot operate in the "CHAZ" to protect citizens, as protesters will not allow them to enter.

"Our calls for service have more than tripled", Best said. "These are responses to emergency calls — rapes, robberies, and all sorts of violent acts that have been occurring in the area that we're not able to get to."

Meanwhile, there have been reports about citizens and businesses being asked to pay a fee to operate in the "CHAZ", while other residents said "armed guards" have asked to see their IDs to enter their homes in the area.