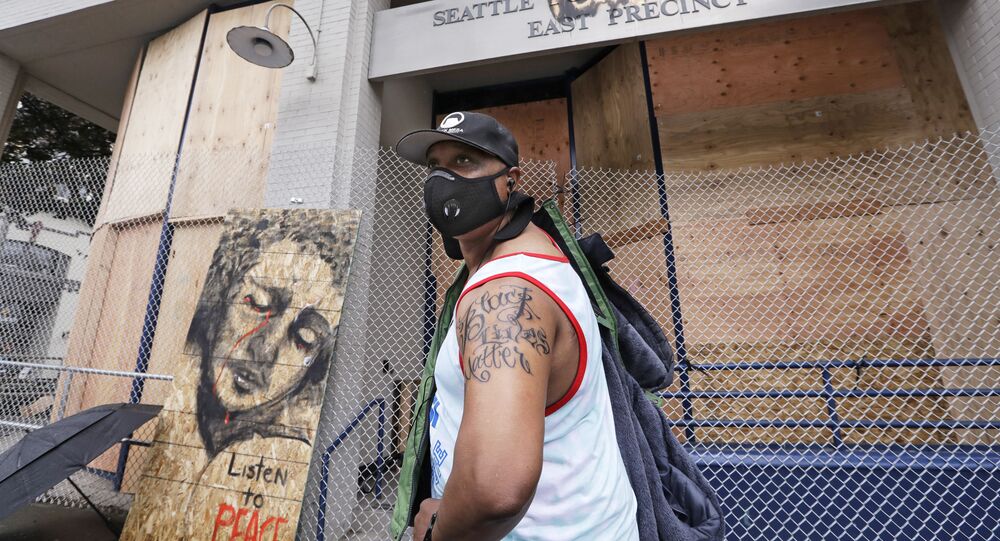 Seattle PD chief Carmen Best confirmed that police had retreated from Capitol Hill in an act of "trust and de-escalation", adding that some barricades will be removed and that the police presence in the area will be reduced.

Footage circulating on social media shows the barricaded zone with "Cops Free Zone" and "Black Lives Matter" painted on the blocks. Another sign said, "You're now leaving the USA" and "entering the "Capitol Hill Autonomous Zone".

I’m outside of the Seattle Police Department’s East Precinct for @townhallcom. Police have pulled out of the area and protesters have set up barricades in the streets. They have declared it a “Cop Free Zone.” pic.twitter.com/iYFQ9B4jhz

5am: The sun is rising over Seattle.

Protest remained peaceful throughout the night.

Here’s what it looks like to enter barricaded zone right now. #seattleprotest pic.twitter.com/u8VeWNDDPW

The boundaries of what Lefties are calling the Seattle Capitol Hill Autonomous Zone. Last night Hard Lefties were warning folks not to actually occupy the empty police station (guessing there is risk of serious charges and/or they presume that cops have wired it). pic.twitter.com/lGw1CZd3tf

Another footage shows protesters cheering along with someone playing the flute. A band was captured giving a "concert" at 11th & Pike late in the evening.

Police later removed sections of the barricades but most of them remained after "negotiations" with the protesters.

SDOT has moved into the area to remove some of the barricades. They have negotiated with the protesters to leave most of the barricades in place. Protesters said they want them in place to keep white supremacists out. pic.twitter.com/QNSH7Qls6Y

A citizen, apparently a protester or one of their supporters, claimed local businesses and residents agreed to retreat from the area, calling it a "flux state in the making".

On Monday, the Seattle Police Department ordered its staff to unblock the streets to allow protesters to march their way to Capitol Hill. Earlier, Democratic Mayor Jenny Durkan also issued a 30-day ban on using tear gas in the city.

The United States has been gripped by protests since the death of Minneapolis black man George Floyd following police custody. The four arresting officers were fired in connection with the incident. One has been charged with second-degree and third-degree murder and manslaughter while the other three have been charged with aiding and abetting murder and manslaughter.