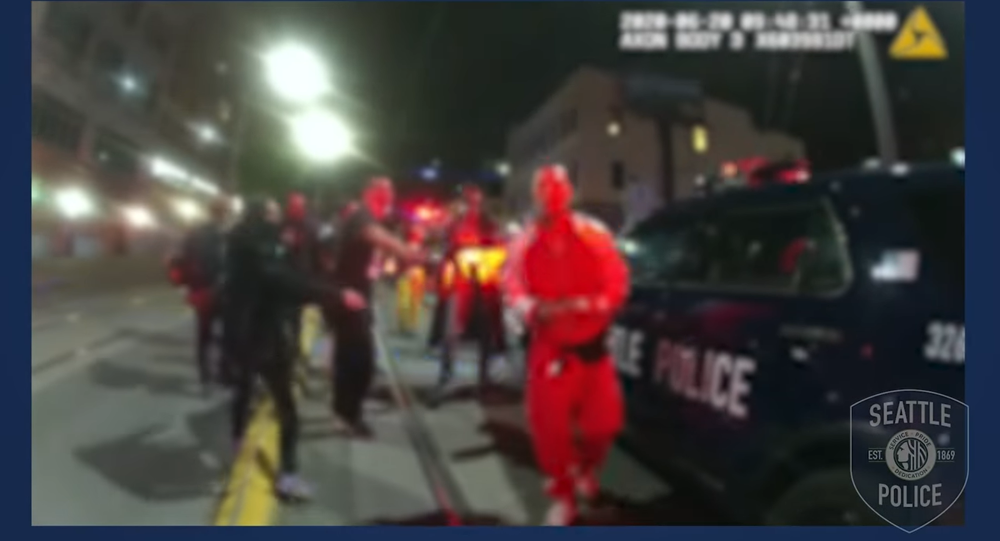 Earlier, police responded to a shooting incident at Cal Anderson Park, near an area currently being referred to as the Capitol Hill Organised Protest (CHOP). The incident left one dead and one with life-threatening injuries.

Bodycam footage of the Seattle Police Department response to shots fired in the area of the Capitol Hill Organised Protest (CHOP) was released on 21 June, a day after the incident.

The video shows police officers gearing up and marching through the cordoned zone, as one of the cops tells the crowd through a loudspeaker: "Please move out of the way so we can get to the victim! All we want to do is get to the victim and provide them aid!".

The crowd, which was characterized as "violent" by the police statement, repeatedly urged the heavily militarized officers to "put your f**king guns down", gathering around them. When police retreated, some tried to get to their cars, while other protesters tried to keep them away.

The incident took place on 20 June, at approximately 2:30 a.m. local time, after police responded to a report of shots fired in Cal Anderson Park, which is in the CHOP area.

“Officers attempted to locate a shooting victim but were met by a violent crowd that prevented officers' safe access to the victims. Officers later learned that both victims had been taken to Harborview Medical Center by CHOP medics", the department statement acknowledged.

The shooting claimed the life of a 19-year-old man, with one other man sustaining "life-threatening injures". According to police, the suspect(s) fled the scene.

“Homicide detectives responded and are conducting a thorough investigation, despite the challenges presented by the circumstances", police said.

Capitol Hill Organized Protest (CHOP) formed during ongoing protests over the death of George Floyd, an unarmed Black man who was killed by white officers while in police custody on 25 May. According to the activists on the scene, the CHOP zone exists outside of the authority of police.