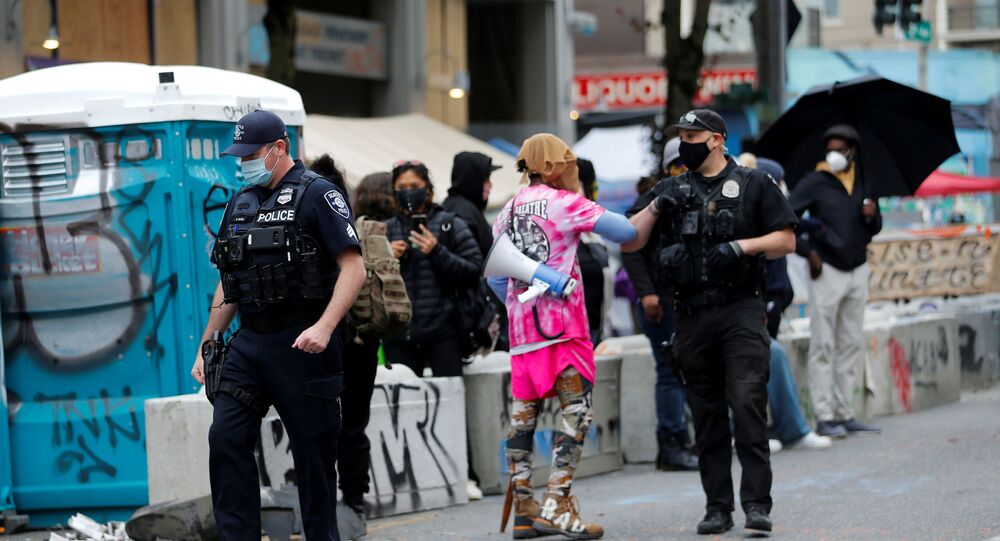 WASHINGTON (Sputnik) - Law enforcement officers in the city of Seattle began entering the protest zone on Wednesday morning to enforce an order from the mayor’s office that the area be vacated, the Seattle Police Department said via Twitter.

“Police on scene continue to issue dispersal orders. Officers have made approximately 10 arrests at this time. Anyone seeking to exit the area can still do so to the south, toward Pike Street,” police said via Twitter before later adding: "Three additional arrests at 12/Pike."

The police also announced that an armed group was approaching law enforcement officers. They also warned that anyone who remains in the area is subject to arrest.

Due to ongoing violence and public safety issues in the East Precinct/Cal Anderson Park area. Mayor Jenny Durkan has issued an executive order to vacate the area. Seattle police will be in the area this morning enforcing the Mayor’s order. https://t.co/SpVRYIB8eg pic.twitter.com/JAt2AvUTCr

Commenting on the current situation, the Seattle police chief stated that the Capitol Hill Organized Protest (CHOP) has become "lawless and brutal," citing four shootings and other violent acts in the area.

© REUTERS / LINDSEY WASSON
Seattle Police Confirm 16-Year-Old Killed in Shooting Near Protest Zone Monday
The self-proclaimed autonomous zone was established at the start of June by demonstrators protesting against the police brutality in the wake of George Floyd’s death in Minneapolis police custody on 25 May.

On 8 June, Seattle police withdrew from the Capitol Hill district, while leaving the Department's East Precinct building behind, as an act of "trust and de-escalation” after days of clashes with demonstrators.