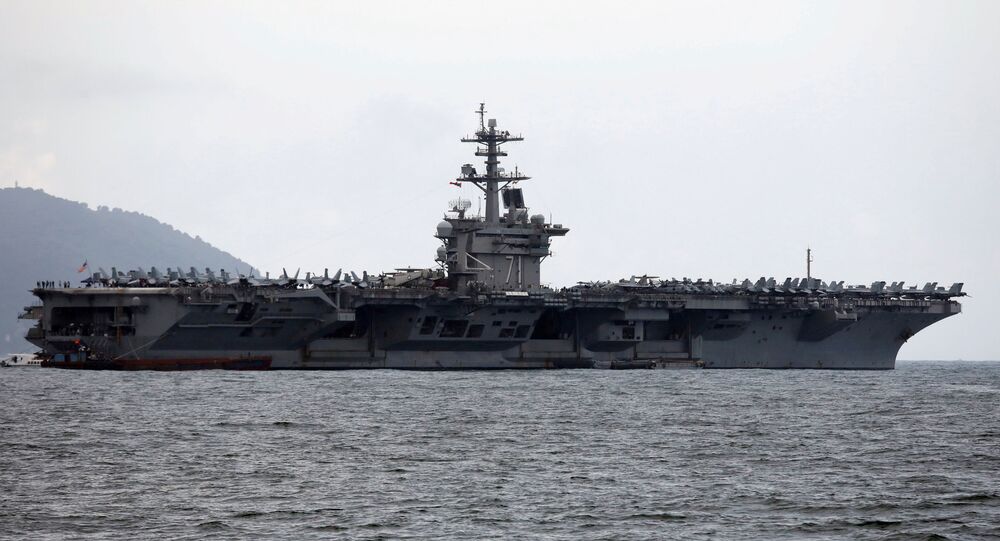 A probe into the April firing of US Navy Capt. Brett Crozier, who once commanded the aircraft carrier USS Theodore Roosevelt, has found that Crozier’s removal was “justified” after he raised public alarm about a growing COVID-19 outbreak on the warship.

"The results of the investigation justified the relief," a person familiar with the investigation told Politico on Friday about its results. "He failed to take appropriate action, to do the things that the commanding officer of a ship is supposed to do, so he stays relieved."

However, a congressional aide told the publication that would be the end of Crozier’s punishments, but not for other Navy officials involved, such as Rear Adm. Stuart Baker, the commander of Carrier Strike Group 9 and the most senior officer onboard the Roosevelt at the time of the crisis.

"Strike Group Command will also be held accountable for poor decision-making,” the aide told Politico, noting Baker’s “second star,” or promotion to rear admiral upper half, was being put on hold.

Chief of Naval Operations Michael Gilday said on Friday that Baker "fell well short of what we expect from those in command,” adding that both Crozier and Baker “did not do enough soon enough."

"Baker and Crozier were talking with the commander of the 7th Fleet every day,” Gilday noted. "If they had issues, they should have raised them."

He further stated that Crozier would not be eligible for any further promotions.

The Navy published a redacted version of its findings on Friday.

On March 30, a letter penned by Crozier to senior staff at Navy Personnel Command urged “all available resources” be sent to help him quarantine the Roosevelt’s crew of nearly 5,000 sailors after several cases of COVID-19 were detected among the crew while the ship was underway.

“We are not at war. Sailors do not need to die. If we do not act now, we are failing to properly take care of our most trusted asset - our sailors,” Crozier wrote. The Roosevelt docked at Guam, where it remained for two months as more than a thousand of the crew, including Crozier himself, were eventually diagnosed with the novel coronavirus. One sailor died.

However, Crozier’s bigger problems came when the letter was obtained and printed by the San Francisco Chronicle on March 31, sparking nationwide outrage. When Crozier was removed as commander of the warship a few days later, the crew sent him off with cheers. Then, when then-acting Navy Secretary Thomas Modly attacked Crozier and admonished the Roosevelt’s crew, he also lost his job amid a second flurry of fury.

Afterward, US Defense Secretary Mark Esper received numerous recommendations that Crozier be reinstated as commander of the Roosevelt, including from Gilday and the new acting navy secretary, James McPherson. However, he was instead given a desk job in San Diego, California, as special assistant to Capt. Max McCoy, chief of staff for the commander of Naval Air Forces, US Pacific Fleet, while the Navy finished its probe into the episode.