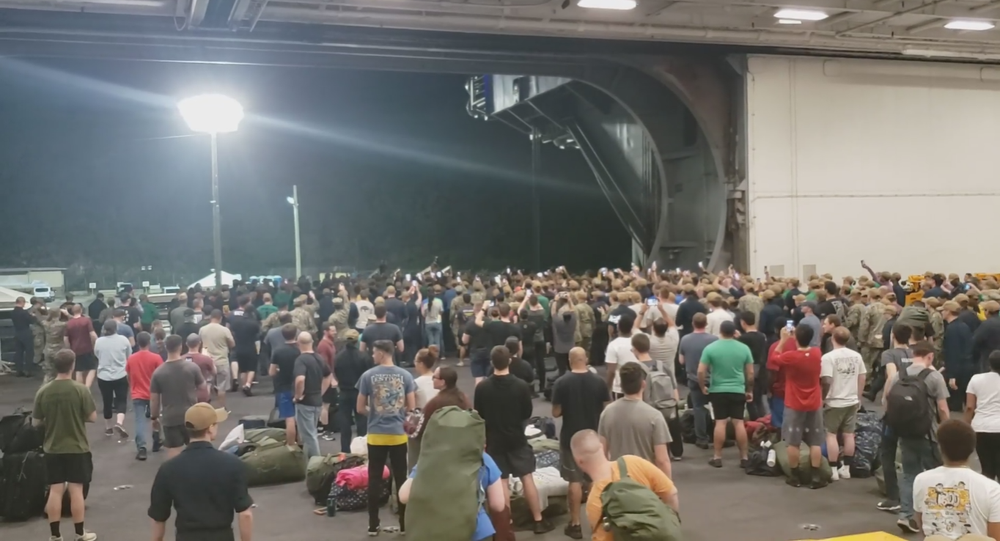 As US Navy Capt. Brett Crozier departed the aircraft carrier USS Theodore Roosevelt on Friday, hundreds of sailors cheered his name. Crozier was removed as captain of the Roosevelt on Thursday after a letter he wrote urging Navy support in addressing the raging COVID-19 outbreak on his ship was leaked to the press.

‘A Man for the People’

“Captain Crozier! Captain Crozier!” several hundred sailors on the Roosevelt cheered early Friday morning as the ship’s former commanding officer walked down the gangway and off the vessel.

The day prior, Crozier was removed from his position by acting US Navy Secretary Thomas Modly for what Modly called “extremely poor judgment.” Crozier’s letter last week to Navy Personnel Command requesting support in quarantining his crew of more than 4,000 sailors after dozens of COVID-19 cases were detected was leaked to the San Francisco Chronicle, creating a national uproar that has only increased since news of Crozier’s removal broke.

Videos of the uproarious send-off by the crew of “The Big Stick,” as many call the ship, began to circulate on social media early Friday. In one video posted on Facebook, hundreds can be seen inside one of the Roosevelt’s huge aircraft hangars, clapping and cheering Crozier’s name.

“That’s how you send out one of the greatest captains you ever had,” someone says off-camera in the video, calling him “a man for the people” and  “a GOAT,” meaning “greatest of all time.”

In another video shot from above, Crozier can be seen stopping at the end of the gangway and briefly turning to wave at the ship he once commanded.

The navy captain that relieved of command, due to “lack of trust “ Nobody who has any common sense wants this captain gone. Least of all his crew. Posting this before it gets taken down. 🙄🙄🙄 pic.twitter.com/ExVX24f4XV

​‘Sailors Do Not Need to Die’

When the first three cases of the novel coronavirus were detected on the USS Theodore Roosevelt, the ship was underway in the Philippine Sea, two weeks out of Da Nang, Vietnam, where the ship had put in for five days. After that number quickly increased to several dozen, the Roosevelt pulled into the US naval base on Guam, and those infected were evacuated to a US naval hospital on the island.

However, with 4,000 crew members living and working in such cramped quarters, Crozier quickly realized the infeasibility of taking proper quarantine measures for two weeks to ensure the virus did not continue to spread.

“Request all available resources to find NAVADMIN [Navy Personnel Command] and CDC [US Centers for Disease Control and Prevention] compliant quarantine rooms for my entire crew as soon as possible,” Crozier said in the letter, which was obtained by the San Francisco Chronicle on March 30.

“This will require a political solution but it is the right thing to do … We are not at war. Sailors do not need to die. If we do not act now, we are failing to properly take care of our most trusted asset - our sailors.”

Modly denounced Crozier’s broad dissemination of the letter, although it’s unclear whether he provided the Chronicle with it, saying it was "completely unnecessary to do."

US Defense Secretary Mark Esper said on April 1 the ship was not yet at a state where it needed to be evacuated, but the following day, more than 1,000 crew were moved ashore, and plans to move another 2,700 were announced.

Modly did indicate, however, that he empathized with Crozier’s defense of the lives of his crew, even at risk to his own career. "I did not make this decision lightly. I have no doubt in my mind that Captain Crozier did what he thought was in the best interest of the safety and well-being of his crew,” Modly told reporters.

On Twitter Thursday night, John Kirby, a retired rear admiral and former spokesperson for the Navy, Pentagon and State Department, tweeted that he thought Crozier’s termination was poorly timed and an overreaction.

I understand the “trust & confidence” argument. It’s sacrosanct in the Navy.

But based on justification put forth by acting SECNAV for why he lost trust & confidence in the TR CO, hard to see it as anything other than an over-reaction & unwarranted at a vital time for the ship.

​“I understand the ‘trust & confidence’ argument. It’s sacrosanct in the Navy,” Kirby said. “But based on justification put forth by acting SECNAV for why he lost trust & confidence … hard to see it as anything other than an over-reaction & unwarranted at a vital time for the ship.”

However, support for Crozier ranges far beyond the halls of the Defense Department. Online, a Change.org petition calling for the commander’s reinstatement had been signed by nearly 100,000 people when this story went to print.

Stars and Stripes reported that memes highlighting the captain’s plight were also circulating on social media. One comic included the figure of Crozier rushing into a burning house and having to choose between saving one of two persons trapped inside: one is labeled “your career” and the other “your sailors.” Crozier is then seen escaping the house with “your sailors” in his arms.

Also on Friday, two US congressmen wrote a letter to Defense Department Inspector General Glenn Fine urging him to open an investigation into Crozier's removal.

"It appears a prima facie case for retaliation by the Navy against Captain Crozier may have been established," wrote Reps. Ted Lieu (D-CA) and Ruben Gallego (D-AZ). "We urge you to open an investigation into this matter as soon as possible." Fifteen lawmakers cosigned the letter, according to The Hill.