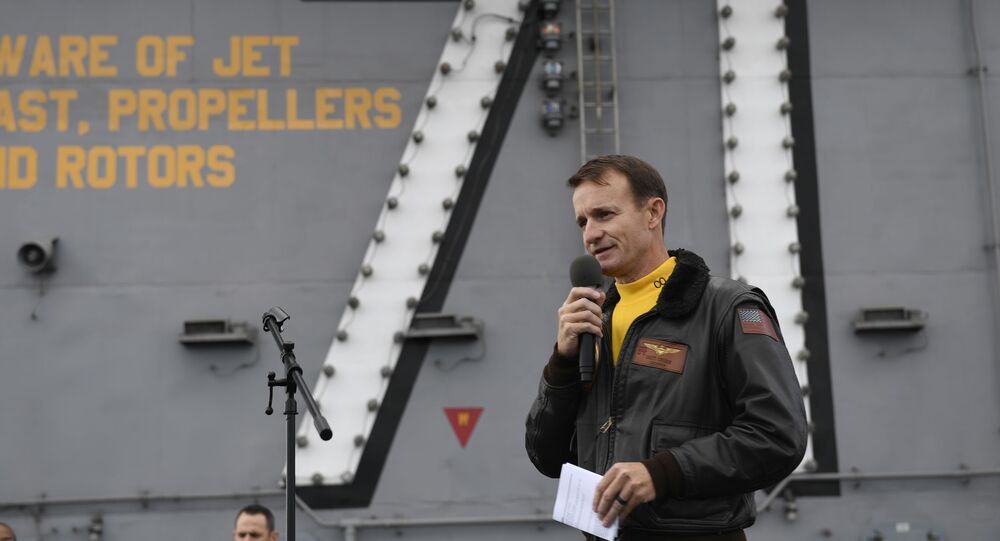 Though many were looking to see Capt. Brett Crozier reinstated as commander of the aircraft carrier USS Theodore Roosevelt, he is currently serving as special assistant to Capt. Max McCoy, chief of staff for the commander of Naval Air Forces, US Pacific Fleet.

Naval Air Forces spokesperson Cmdr. Ron Flanders confirmed Tuesday to the Navy Times that Crozier had arrived in San Diego, California, on Monday night after departing from Guam, where he and more than 1,000 other sailors from the Roosevelt were quarantined after testing positive for the COVID-19 novel coronavirus.

Flanders revealed to the US military outlet that Crozier will report to the commander of Naval Air Forces, US Pacific Fleet, while on temporary duty assignment.

When asked whether the temporary assignment signals a larger decision pertaining to Crozier’s possible reinstatement as the Roosevelt’s commander, Flanders refused to comment, noting the matter is “above us.”

Crozier was removed from command on April 2 after he "raised alarm bells unnecessarily,” according to then-acting Navy Secretary Thomas Modly, and issued a letter to service leaders requesting support amid a COVID-19 outbreak aboard the ship.

“If we do not act now, we are failing to properly take care of our most trusted asset — our sailors,” Crozier said in his letter.

Modly later contended that Crozier had "demonstrated extremely poor judgment" and broken the chain of command while also undermining the Navy’s efforts at the time to contain the novel coronavirus.

Since Modly’s exit on April 7, the Navy has conducted a preliminary inquiry, briefing Defense Secretary Mark Esper on its findings on April 24. Reports at the time alleged that Navy leaders were advocating for Crozier’s reinstatement as the Roosevelt’s commander.

Nothing has been revealed pertaining to Crozier’s future duties, aside from his temporary assignment with the Naval Air Forces, US Pacific Fleet.

In fact, official word on his possible reappointment will have to follow a second investigation ordered by acting Navy Secretary James McPherson. Stars and Stripes reported the new Navy official called for a deeper review of the COVID-19 outbreak and the Navy’s response, as the original inquiry left him with “unanswered questions.”

The second investigation is due to be delivered to Adm. Mike Gilday, chief of naval operations, by May 27, unless an extension is obtained.

US COVID-19 Death Toll May Reach 350,000 if All States Reopen in June, Model Predicts