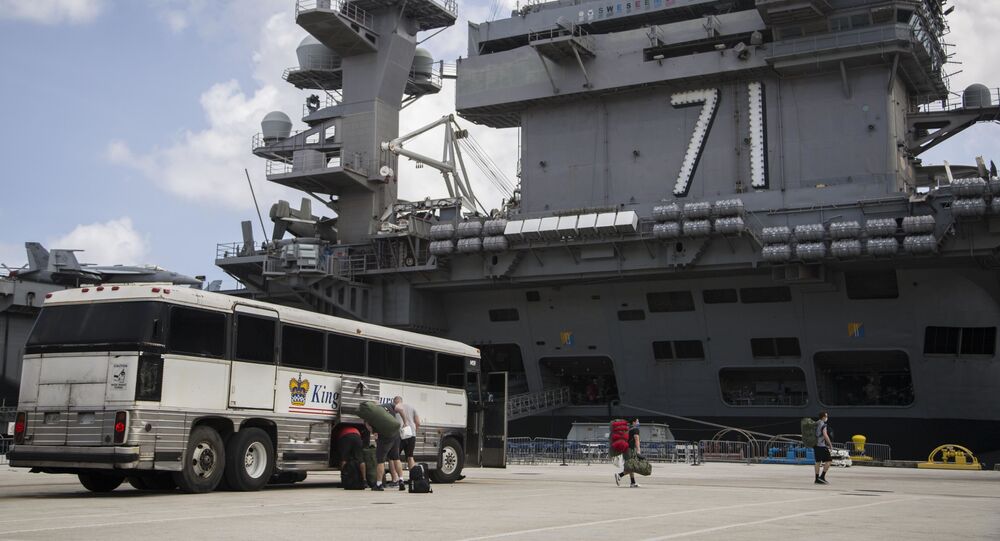 After spending up to 27 days in quarantine due to the COVID-19 novel coronavirus outbreak on the USS Theodore Roosevelt (CVN 71), US Navy sailors who met certain testing criteria were allowed to begin returning to the sanitized aircraft carrier on Wednesday.

The Joint Region Marianas Public Affairs Office in Guam announced on April 29 that a number of sailors previously placed under movement restrictions to mitigate the chances of the novel coronavirus spreading on the Roosevelt have begun returning to the Guam-docked ship.

Those eligible to rejoin the hundreds of sailors attending to the Roosevelt’s sanitization and essential functions were required to have three negative COVID-19 tests, “including one to determine eligibility to depart Naval Base Guam for hotel quarantine” earlier this month, according to the news release published on Facebook by the office.

Two additional tests were also administered to the sailors prior to receiving approval to begin returning to the aircraft carrier “to ensure they are COVID-free and healthy.”

“In order to maintain social distancing between the returning Sailors, transportation to the ship includes travel via large buses,” the Joint Region Marianas command said in the release. “These vehicles will be thoroughly cleaned in accordance with recommended Centers for Disease Control and Prevention standards before, between and after each use.”

The office noted that the bus driver and all personnel transported from their Guam hotels to the Roosevelt will be wearing personal protective equipment.

In addition to some sailors having to combat COVID-19, service members aboard the infected aircraft carrier openly came to their captain’s defense when then-acting US Navy Secretary Thomas Modly announced on April 2 that Captain Brett Crozier, the commanding officer of the USS Roosevelt at the time, had been relieved of duty after he "demonstrated extremely poor judgment" and issued a letter outside the chain of command, asking for support from Navy leaders in quarantining the ship’s crew.

The Navy secretary, who has since resigned from his own position over the firing, claimed Crozier "raised alarm bells unnecessarily" when he wrote to service leaders requesting support, and undermined the Navy’s efforts to contain the novel coronavirus.

More recently, Gen. Mark Milley, chairman of the Joint Chiefs of Staff, has called for a “full-blown investigation” of the captain’s forced resignation, and Navy leaders have spoken with US Secretary of Defense Mark Esper regarding the service’s preliminary inquiry. A decision on Crozier’s possible reinstatement is expected as soon as next week, according to defense officials who spoke to Politico.

Nearly 1,000 members of the Roosevelt’s 4,800-strong crew, including Crozier, tested positive for COVID-19 over the past few weeks, reported Stars and Stripes, citing numbers published Tuesday from the Department of Defense. At least one of the aircraft carrier’s sailors has died from the virus.

Infections related to the Roosevelt make up the majority of the Navy’s 1,691 confirmed cases of the novel coronavirus. As of April 28, an estimated 4,265 cases of the contagious disease have been identified in the US military.

It’s alleged that dozens of naval ships, such as the Arleigh Burke-class destroyer USS Kidd, have had cases of the novel coronavirus identified among their sailors.

The US Armed Forces have ramped up Pentagon testing of service members for the novel coronavirus and implemented a tiered system for screening personnel. The first wave, which includes service members involved in “critical national capabilities,” such as troops in the US military’s nuclear forces and a number of Special Operations forces, are expected to wrap up COVID-19 testing by the month’s end.