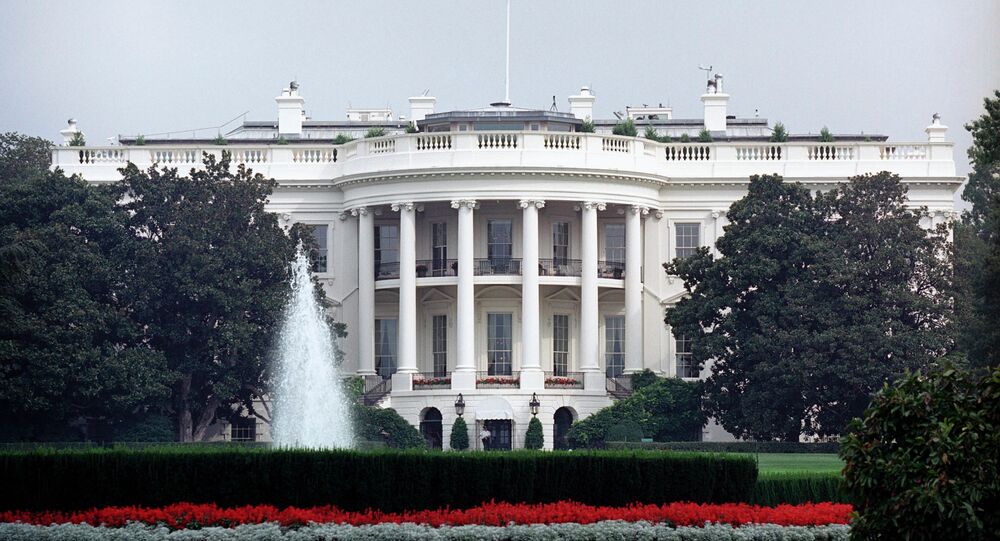 Videos: White House Under Lockdown Amid 'Justice for Floyd' Protests in Washington, DC

The White House was placed under lockdown on Friday evening as thousands of protesters in Washington, DC converged on the presidential mansion demanding justice for Minneapolis man George Floyd, whose death earlier this week at the hands of police has sparked riots in the Minnesota capital and protests across the country.

On Monday evening, Floyd, a 45-year-old black man, was stopped and arrested by several Minneapolis Police Department officers on suspicion of having tried to pay for groceries with a counterfeit bill. When he was tackled to the ground, one white officer, Derek Chauvin, placed his knee on Floyd’s neck for several minutes, after which he died.

Thousands of protesters in Washington, DC, on Friday evening marched to Lafayette Park in front of the White House, sending the presidential mansion into lockdown mode. At least one protester was also arrested during a scuffle with police outside the US Treasury building nearby, but the details are uncertain. There have also been reports on social media of police using pepper spray.

People have managed to toss over the temporary barricades, they’re being pushed back by the Secret Service. More police arriving. Heating up fast outside the White House’s north lawn. pic.twitter.com/jaXKmjV0R9

​Their march began at the intersection of U St. and 14th St. Northwest, two major thoroughfares that meet in front of the Municipal Center, where they chanted “racist police have got to go” and “I can’t breathe,” echoing Floyd’s final words heard in the graphic video of his death that sparked the protests.

“Hey hey, ho ho, racist police have got to go” — crowd gathered at intersection of 14 and U NW in DC. #GeorgeFloydprotest pic.twitter.com/AGMaDJh2WT

The protest then headed to in front of the White House. A protester was taken by the USSS in front of Pennsylvania Ave into an adjacent federal building. Unclear what he did.A couple men then splintered off from the group and spray painted “F*ck Trump” on the building. @cbsnews pic.twitter.com/OVwPu0PF6X

​The roughly 200 protesters, many of whom wore “Black Lives Matter” shirts and carried signs demanding justice for Floyd, also observed a moment of silence in honor of Floyd and several other black persons slain recently, including Ahmaud Arbery, Breonna Taylor and Dreasjon “Sean” Reed.

DC protestors observe a moment of silence at 14th and U NW. pic.twitter.com/PHGUAJpq0q

​Demonstrators maintained social distancing in line with DC advisories about public gatherings and according to communications by organizers prior to the protest. However, the heavy police presence described the situation as “fluid,” leaving it unclear if they would act to shut it down or not.

"Growing protest at U street for George Floyd" https://t.co/tlm6pcPuuP pic.twitter.com/dcs5V5r1gy

​Chauvin was arrested on Friday afternoon and charged with second-degree manslaughter and third-degree murder, although the coroner’s report also released on Friday noted “no physical findings that support a diagnosis of traumatic asphyxia or strangulation” in Floyd’s death.

​Chauvin’s arrest followed several days of protests in Minneapolis that snowballed into riots as protesters smashed, then torched the police station where Chauvin was based and proceeded to loot several stores. Other buildings have also been burned, and Minneapolis Governor Tim Walz dispatched at least 500 Minnesota National Guardsmen to the city to restore order.

Earlier in the day, US President Donald Trump said in a tweet flagged by Twitter for promoting violence that "when the looting starts, the shooting starts."

On Hiawatha Av and East lake about 40 or so National Guard heavily armed. #MinneapolisUprising pic.twitter.com/RIo8NjcE55

​The location of the DC protest has been a common site for political demonstrations, ranging from the “don’t mute DC” protests that asserted the right of locals to play in public the city’s distinctive Go Go music to the more violent protests following the assassination of black civil rights hero Dr. Martin Luther King Jr. in 1968, when the intersection of 14th and U was ground zero for the riots that burned much of the city.