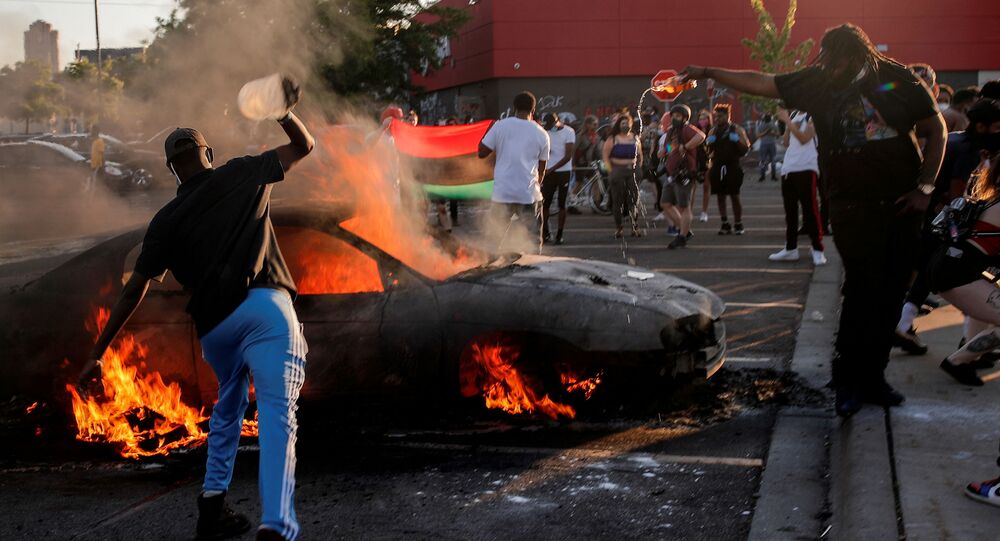 The National Guard, a militia force that exists in each American state, has been activated in Minnesota to help deal with civil unrest for the first time in 12 years. The soldiers are expected to protect peaceful demonstrators and firefighters, as well as shield businesses from looters.

Minnesota Governor Tim Walz on Thursday called up the National Guard as protests over the death of George Floyd continued for the third day in a row.

The move highlighted local authorities' struggle to suppress the riots, which descended into skirmishes with police, looting and arson.

"These activities threaten the safety of lawful demonstrators and other Minnesotans, and both first responders and demonstrators have already been injured," Walz said in the executive order that activated the deployment.

"The City of Minneapolis has exhausted its resources and called for assistance from mutual aid partners to ensure immediate response to protect life, safety, and property."

Here is a guide to what the Guard is and what it will be doing during the planned mission in Minneapolis.

What is the National Guard?

The National Guard is a reserve military force. It exists in all 50 states, three territories and the District of Columbia. Each of those 54 units is made up of people from that state or territory, and reports to its respective governor who acts as the commander-in-chief (with an adjutant general who acts as a liason).

There are about 450,000 Guard troops in all states and territories. They are typically called into action by a governor, although they can be put under federal control by the president.

The Guard is part-time, and its members do a civilian job or go to school most of the time. They usually drill two days each month, with an annual two-week training period. That's right: the National Guard is made of teachers and farmers rather than Imperial stormtroopers.

What does the National Guard do?

In general, it helps local authorities fill whatever gaps they identify in case of emergency when local resources are not enough.

The Guard soldiers are commonly used for disaster relief, like in 2005 when they helped the army and local authorities deal with the aftermath of Hurricane Katrina. Around 47,000 troops have been activated across the US this year to assist the states' coronavirus response: sanitise public places and nursing homes, deliver food and supplies, and conduct drive-thru tests.

They also go on rare overseas peacekeeping missions and are more often activated in the event of public unrest or a terrorist attack. For instance, the Minnesota National Guard deployed 150 soldiers to contain the crowd at the 2008 Republican National Convention in St. Paul. According to a follow-up commission report, they did not directly interact with the protesters and served as a back-up for police. This was the last time the state Guard was called up in Minnesota to deal with civil unrest.

A more comparable situation to the ongoing riots happened in July 1967, when the Guard helped quell three days of riots that erupted in Minneapolis over racial tensions.

The 1878 Posse Comitatus Act prohibits the National Guard from performing domestic law enforcement functions when operating under federal authority. State deployments are an exemption from that law, meaning that governors can allow the Guard to exercise police powers such as arrests or detentions – or even kill civilians.

In 2005, Louisiana Governor Kathleen Blanco authorised the National Guard to "shoot and kill" looters and rioters in the aftermath of Hurricane Katrina.

What about the current deployment?

Tim Walz said that they would protect "peaceful demonstrators, neighbours, and small businesses". The Adjutant General will be working with local authorities to provide personnel, equipment, and facilities needed to respond to and recover from this emergency.

The soldiers are expected to provide back-up crowd control assistance at demonstrations and prevent looting. There has been no indication that they will be able to use firearms or make arrests.

According to the Minnesota National Guard, their "key objective" is to ensure that fire crews are able to respond to calls.

We have activated more than 500 soldiers to St. Paul, Minneapolis and surrounding communities. Our mission is to protect life, preserve property and the right to peacefully demonstrate. A key objective is to ensure fire departments are able to respond to calls.

Authorities said that firefighters responded to 30 intentionally set blazes from Wednesday night to Thursday morning, including at least 16 structure fires, in addition to reports that there were gas lines to the torched precinct building have been cut and there were other explosive materials in the building.

The National Guard was activated after angry rioters overran and torched a police precinct located at the epicentre of the protests . Assistant Fire Chief Bryan Tyner said that fire crews could not safely respond to fires at the precinct station and some surrounding buildings.

The state Guard tweeted out a picture of an armoured vehicle that is supposed to accompany a fire crew.

We are here with the Minneapolis Fire Department ready to assist so they can safely do their mission. pic.twitter.com/FjsCJ5B8d0

​There have been reports that such vehicles started rolling through downtown Minneapolis in the early hours of Friday.