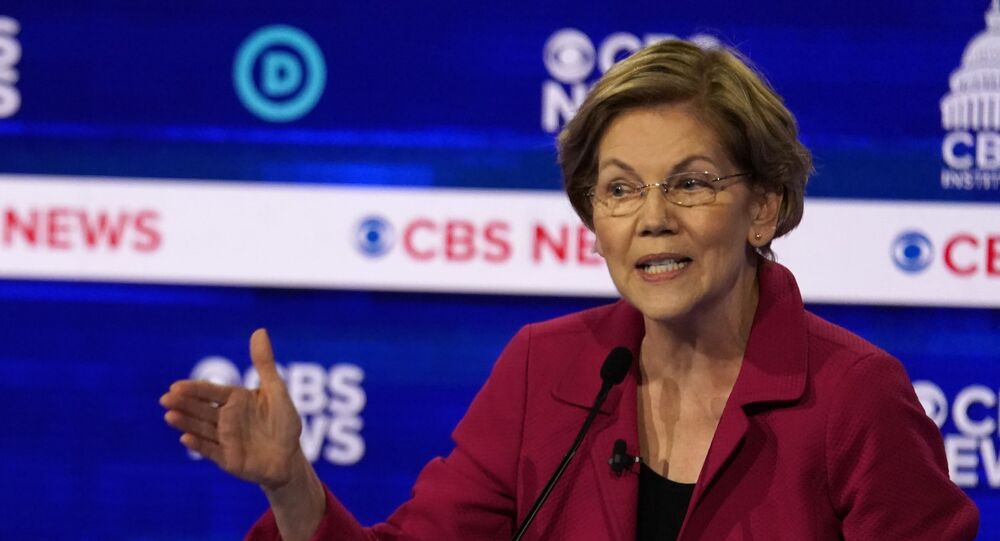 Massachusetts Senator Elizabeth Warren dropped out of the 2020 presidential race following another round of disappointing finishes in primary contests across the country on 3 March - Super Tuesday.

Sen. Elizabeth Warren’s (D-MA.) former 2020 presidential campaign staffers have been called out for getting tattoos to commemorate her run, which ended on 5 March, by getting tattoos that have been perceived as bringing to mind numerical identification tattoos given to Holocaust concentration camp prisoners during WWII.

tell me about bernie's cult of personality again? pic.twitter.com/Z8CODg8zIr

​Throughout Warren’s 2020 Democratic nomination for President her supporters on Twitter used a uniform profile picture or “avi” style on the platform, consisting of a grayscale profile photo of a person alongside a light green background.

Known as the Liberty Green, the hex code for this color is #b7e4cF.

At least two former staffers opted for tattoos on their arms in Elizabeth Warren’s handwriting, displaying the hex code for the campaign’s “Liberty Green” theme.

“First campaign, first tattoo,” wrote one of the staffers, Eric Ziminsky, in a caption to his tattoo image.

It has been suggested on social media the staffers had been aware of likely criticism over their choice but went ahead regardless, as former Warren campaign design director Raquel Breternitz, the other staffer, noted in her post that she had “thought about” the possible association to Nazi concentration camps, and placed the tattoo where “it wouldn’t be seen on the outer arm.”

“It’s her handwriting and my partner is Jewish. I’m so, so sorry it feels that way for you but I promise I thought about that and chose placement so it wouldn’t be seen on the outer arm,” wrote Raquel Breternitz after an avalanche of criticism.

Both individuals who are confirmed to have already gotten the Warren tattoo, Raquel Breternitz and Eric Ziminsky, have apologized for their lapse of judgement, confessing to “missing the mark” and vowing to “take steps to modify the tattoo”.

Hey y’all, I’m sorry as well, and will be making modifications. Thank you for holding us accountable on our mistakes. I would recommend for folks who are thinking of a similar tattoo, please look for alternatives such as, pinky promise, logo, persist, or DBFH. https://t.co/3OyGfg6JqL

Thanks to all who called me on this. I do not want to evoke or make light of the Holocaust. I apologise for missing the mark. I am here to listen and will strive to be better at living in solidarity with my Jewish friends. I'm sorry, and I will take steps to modify the tattoo.

​Netizens wasted no time in pointing out what they saw as obvious, even if accidental, reference to Nazi atrocities during the Holocaust.

These two things might not look exactly alike, but they are *enough* alike that the people who got them or the artist who tattooed them should have given it a second thought. I know it's too late now, but maybe folks should rethink their @ewarren tattoo choices in the future? pic.twitter.com/MFOy6RaXqr

One of the people who got the tattoo knew that it looked similar to a Holocaust tattoo, and still chose to get it. Notice below the "my partner is Jewish" and "I'm sorry it feels that way for you" cards. Please, folks, be aware of and careful with your privilege.🤦 pic.twitter.com/nzGgoxkkYM

This turns my stomach, actually.

To know, to have people close to you, and to do it anyway.

i'm not like ~triggered~ or whatever but my grandparents had concentration camp tattoos on their arms and it just....seems insane that they wouldnt think of it. obviously warren staffers didnt do it on purpose but like......do you not know any jewish people?

This is triggering to me. How could they have not known. 😞

Wow, pretty tone deaf coming from the tone police themselves.

warren supporters branding themselves with holocaust tattoos and cryptofascist imagery was not the turn I expected but in retrospect the postmodern world-system is collapsing so https://t.co/xZmXMwlgPF

​Some netizens believed that not only the staffers themselves should be held to account, and demanded that Elizabeth warren “take responsibility”.

I think @SenWarren should go on @MSNBC and talk to @maddow to make a public apology, taking full responsibility for the behavior of her supporters.

Maybe the party can do something about this?

​Some comments by users adopted a more placatory tone.

I’ve met designers with hex code tats, I know developers with binary tats, and I also know plenty of people with dates tatted on them. I don’t really think “Holocaust tat” when i see any of these because they’re all stuff people are doing to their own bodies voluntarily

​The disconcerting posts by the staffers also ignited a parody meme-fest on Twitter “inspired by Elizabeth Warren.”

​Senator Elizabeth Warren announced her candidacy in the 2020 United States presidential election on 9 February 2019, and was briefly considered the front-runner in autumn of last year.

The Massachusetts senator dropped out of the presidential race following a round of disappointing finishes in primary contests across the country on Super Tuesday.