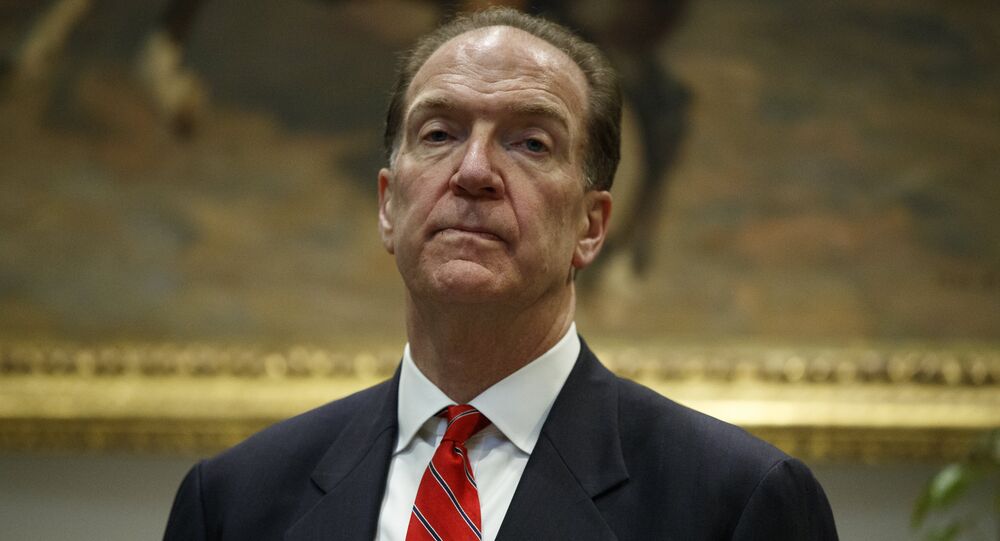 David Malpass, Donald Trump's pick to lead the World Bank, is due to take part in the institution's presidential elections during April's Spring Meetings. Given the nominee's criticism towards the international financial organisation and its development initiatives, he may potentially meet opposition from the bank's other shareholders, media say.

On 6 February, Donald Trump nominated Undersecretary of the US Treasury David Malpass to be the next president of the World Bank, as the previous head of the institution, Jim Yong Kim, stepped down prematurely on 1 February.

Since the establishment of the World Bank, the US has chosen the organisation's head, being its major donor. Trump's pick, who has earlier overseen the government's relationship with the World Bank, is known as an ardent critic of the international organisation and a "hawk" with regard to China.

President Trump Announces the United States Candidate for Election as the Next President of the World Bank https://t.co/Fs3nTrcWFj

​Speaking at Malpass' nomination, Trump highlighted that his pick is "the right person to take this incredibly important job" and "a strong advocate for accountability at the World Bank".

"America is the largest contributor to the World Bank, giving over $1 billion every year", the US president said. "My administration has made it a top priority to ensure that US taxpayers' dollars are spent effectively and wisely, serve American interests, and defend American values".

It was earlier reported that the White House had also considered Mark Green, head of the US Agency for International Development, Ray Washburne, president of the Overseas Private Investment Corporation, US diplomat Robert Kimmitt, and former White House adviser and Goldman Sachs executive Dina Powell to lead the World Bank.

Trump's Pick Likely to Crack Down on China's Initiatives

© REUTERS / Jonathan Ernst
Trump Nominates Senior US Treasury Official David Malpass to be Next President of World Bank
In his 7 February op-ed titled "What I would do as the next president of the World Bank", the nominee insisted that the bank "should work to move countries on from lending programmes when they achieve higher income levels, allowing it to concentrate on the developing nations most in need of lending".

The remark is aimed at Beijing: Malpass has repeatedly criticised the World Bank for giving a significant share of its resources to China, one of the world's largest economies.

According to the New York Times, in April 2018, he helped negotiate a $13 billion capital increase for the institution on condition that higher income countries such as China would face higher borrowing costs.

"China is absorbing decades of financial know-how into its institutions in a few short years, a similar pattern to its absorption of manufacturing technology", the Treasury official told the Senate Foreign Relations Committee in November 2018.

In addition, he was particularly critical about China's One Belt One Road initiative, claiming during his testimony before the House Financial Services Committee in December 2018 that it would leave developing countries "with excessive debt and poor-quality projects".

Why Malpass May Prompt Resistance From World Bank Shareholders

© AP Photo / Cliff Owen
The Clintons' Ally? Wall Street Analyst on World Bank President's Rise and Fall
The latest Hill op-ed describes Malpass as the man who deserves the position, stressing that he has "the management and leadership experience for the job", "a strong understanding of what the World Bank can do" and a "deep understanding of international affairs and the world". Additionally, he speaks Spanish, French and Russian, the media outlet highlights.

Meanwhile, some observers have called attention to the fact that it was Malpass, the Wall Street veteran, who overlooked the 2008 financial crisis. In his 2007 piece for the Wall Street Journal, the economist wrote that "housing and debt markets are not that big a part of the US economy, or of job creation". However, the US' subprime mortgage market problems in 2007 spiralled into an all-out global banking crisis in 2008.

For its part, Foreign Policy raised the question whether Malpass will "run the World Bank or ruin it".

"[Malpass] has faithfully echoed President Donald Trump's denunciations of multilateralism run amok, taking aim at institutions such as the World Trade Organization and the International Criminal Court", the magazine pointed out.

© AP Photo / Seth Wenig
Speculations Rife In India Over Indra Nooyi Becoming World Bank President
According to the media outlet, Trump's choice mirrors the president's other nominations, "with leaders seemingly hand-picked to undermine the agencies they are tapped to lead".

The concerns voiced by the magazine have been circulated by the media since Jim Yong Kim's surprising resignation announcement on 7 January.

Thus, Quartz suggested that "US president Donald Trump's well-publicized skepticism of multilateral institutions may make the board hostile to his choices".

For its part, Vox argued that the World Bank's next head should not be an American: "A number of possible candidates come to mind, but perhaps the most obvious is Ngozi Okonjo-Iweala", a former foreign affairs and finance minister for Nigeria. The media outlet also named Raghuram Rajan, the former IMF chief economist, and African Development Bank President Akinwumi Adesina among potential candidates.

According to Reuters, Malpass' nomination means that "the Trump administration wants a firmer grip on the World Bank". At the same time, the news outlet pointed out that his candidacy is "subject to a vote by the World Bank's executive board", presuming that it could prompt resistance from some of its 188 other shareholding countries. Currently, the bank is run by interim President Kristalina Georgieva.