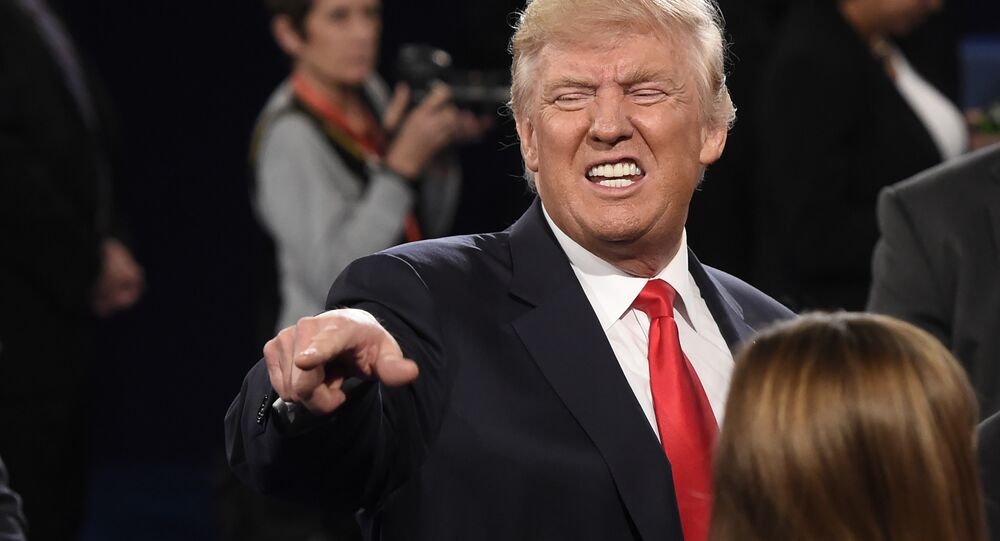 It appears that Donald Trump is at it again: after pulling out of the Iran nuclear deal, subjecting Tehran to harsh criticism and issuing tough threats, the US president has extended a hand to the Islamic Republic. According to French Foreign Minister Jean-Yves Le Drian, Trump's move strikingly resembles his North Korea strategy.

US President Donald Trump is repeating his North Korea maneuver, French Minister of Europe and Foreign Affairs Jean-Yves Le Drian told France Info, referring to the US president's announcement that he would meet Iranian leaders "anytime they want."

"[Trump] attacks, he takes strong measures and then he proposes to talk. For now, in North Korea, this has not yielded the expected results so far," Jean-Yves Le Drian pointed out.

On July 30, during a joint press conference with Italian Prime Minister Giuseppe Conte, Trump signaled that he was open to dialogue with Tehran.

© AP Photo / Evan Vucci
Attacks, Tough Measures: Paris Compares Trump's Approach to Iran and North Korea
US-Iranian relations have been more than strained after the American president unilaterally withdrew from the Joint Comprehensive Plan of Action (JCPOA), commonly known as the Iran nuclear deal, on May 8 and announced the resumption of sanctions against the Islamic Republic, much to the disappointment of Washington's European allies. By August 6 and November 4, foreign companies have to wind-down all their business activities in Iran not to fall under the US sanctions regime.

Additionally, some Trump administration officials have repeatedly made controversial statements regarding the possibility of a "regime change" in Iran. Besides John Bolton, who pledged to oust the Iranian leadership "before 2019," ahead of assuming the position of national security adviser, personal attorney to Trump Rudy Giuliani made a similar remark in early May.

© AP Photo / Jose Luis Magana
Analyst: US, Israel Formed 'Highly Professional Working Group' Against Iran
To add to the ongoing controversy, Axios, an American news and information website, broke on July 3 that Washington and Tel Aviv had established a joint team with the aim of exerting pressure on the Iranian government, citing unnamed Israeli officials.

The US-Iran spat reached its apogee on July 24, when Trump tweeted addressing Rouhani, in all caps: "Never, ever threaten the United States again or you will suffer consequences the likes of which few throughout history have ever suffered before. We are no longer a country that will stand for your demented words of violence and death. Be cautious!"

COLOR US UNIMPRESSED: The world heard even harsher bluster a few months ago. And Iranians have heard them —albeit more civilized ones—for 40 yrs. We’ve been around for millennia & seen fall of empires, incl our own, which lasted more than the life of some countries. BE CAUTIOUS!

Indeed, earlier, the Democratic People's Republic of Korea (DPRK) was subjected to a strikingly similar verbal attack by Trump.

"Kim Jong Un of North Korea, who is obviously a madman who doesn't mind starving or killing his people, will be tested like never before!" the US president tweeted on September 22, 2017.

​Amid speculations of a "military option" on Washington's table in regard to North Korea, Trump yet again threatened Pyongyang on January 2 by saying that the US has "a much bigger and powerful nuclear button" than the DPRK.

​Washington's harsh rhetoric, accompanied by US navy maneuvers in close proximity to the Korean Peninsula, prompted fears that the US president was pushing Pyongyang to a direct confrontation.

© AP Photo / Wong Maye-E
US-North Korean 'Stalemate' Nothing but 'Fake News' – CCTV Commentator
However, over the course of half a year, the "little rocket man" has turned into "Chairman Kim" in Trump's tweets.

On March 6, South Korea signaled that the North Korean leadership was open to talks on denuclearization with Washington. The announcement raised many eyebrows, triggering the question whether Trump's "blustery rhetoric" had worked.

The road to the US-North Korea summit was not without bumps: John Bolton's "Libya remark" in regard to the DPRK nuclear program nearly nipped the bilateral initiative in bud. However, Trump demonstrated temperance in his May 24 letter to Kim.

A letter from the President to Chairman Kim Jong Un: "It is inappropriate, at this time, to have this long-planned meeting." pic.twitter.com/3dDIp55xu1

​The ice was broken and the preparations for negotiations went on.

On June 12, Trump and Kim Jong-un held a historic meeting in Singapore, which is expected to pave the way for the denuclearization of North Korea.

I want to thank Chairman Kim for taking the first bold step toward a bright new future for his people. Our unprecedented meeting – the first between an American President and a leader of North Korea – proves that real change is possible! pic.twitter.com/yF3iwD23YQ

​Still, it appears that Tehran remains highly skeptical about Trump's back and forths.

"The United States is not trustworthy. How can we trust this country when it withdraws unilaterally from the nuclear deal?" Iranian Interior Minister Abdolreza Rahmani Fazli asked, responding to Trump's statement, as quoted by the news agency Fars.

The Financial Times cited Mohammad-Ali Abtahi, an Iranian theologian and former vice president of Iran, as saying: "Mr. Trump's offer seems to be aimed at increasing public pressure on the Islamic republic so that Iranians blame their rulers for the consequences of sanctions… Mr. Trump thinks the mere gesture of offering negotiations is a victory for him, but he does not seem to have any intention to give Iran anything in return."