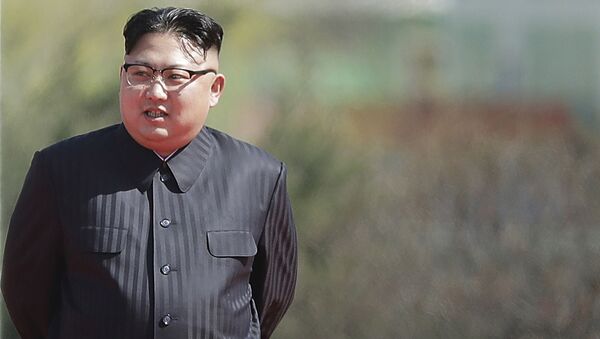 Ekaterina Blinova
All materialsWrite to the author
The US-North Korean negotiation process is up and running, despite media claims to the contrary, Tom McGregor, a Beijing-based CCTV editor and commentator told Sputnik, explaining why the final deal between Washington and Pyongyang cannot be concluded overnight.

It has prompted some media outlets to claim that "as Trump engages Putin, his deal with Kim Jong-un collapses." According to Tom McGregor, a Beijing-based political analyst, an Asia-Pacific commentator and senior editor for China's national TV broadcaster CCTV, the US-North Korea "stalemate" is nothing but "fake news."

"After witnessing many American reporters fall into hysterics shortly after the press conference between United States President Donald J. Trump and Russian President Vladimir Putin that was held in Helsinki, Finland earlier this week, one could conclude that the so-called claims of a 'stalemate' between Washington and Pyongyang may be nothing more than a fake news prank by malicious journalists bent on inflict political damage to President Trump," McGregor opined, speaking to Sputnik.

Kim Jong-un: 'Extraordinary Efforts' Made by Trump for Improving US-N Korea Ties
Earlier, US Secretary of State Mike Pompeo came under criticism from Pyongyang following his trip to North Korea on July 6-7.

On July 7, the North Korean Ministry of Foreign Affairs stated that the talks with Pompeo were "regrettable" and emphasized the US "gangster-like demand for denuclearization."

The statement sparked a heated debate in the US mainstream media which declared Trump's defeat, adding that the US president "has nobody to blame for North Korea but himself."

Responding to mounting criticism, Trump tweeted on July 9 that he had confidence "that Kim Jong Un will honor the contract [they] signed and, even more importantly, [their] handshake."

I have confidence that Kim Jong Un will honor the contract we signed &, even more importantly, our handshake. We agreed to the denuclearization of North Korea. China, on the other hand, may be exerting negative pressure on a deal because of our posture on Chinese Trade-Hope Not!

​On July 12 the US president shared Kim Jong-un's letter on Twitter, saying that the denuclearization process is going on.

​"The letter was a gesture of peace and Trump was correct to appreciate receiving it," McGregor stressed. "The letter was delivered around the same time when Western media reports were claiming that Pyongyang was continuing to nuclearize its weaponry even after the Singapore Summit was held."

Referring to Pyongyang's harsh tone, the Beijing-based journalist noted that one "can still anticipate bumps in the road with US-North Korean talks."

"The occasional confrontations are simply for show to save face, because the North Korean leadership always wants to show a strong face to its citizens and the world, even when they intend to pursue the path of peace," he explained.

The journalist highlighted that Trump's opponents have never missed an opportunity to rebuke the US president for his real or imaginary failures.

US Says North Korea Violated UN Sanctions at Least 89 Times in 2018 - Reports
"The Democrat Party and anti-Trump reporters all want Trump to fail," he said. "No matter how much Trump succeeds, you can expect his critics to say 'he failed,' because that's how the NeverTrump echo chamber operates."

Thus, the influential magazine Foreign Policy bemoaned the fact that "there is no legally binding contract and no agreement" between Trump and Kim.

"There is only a handshake and a vague 400-word summit statement that papers over huge disagreements about the meaning of denuclearization and what sequence of steps is required to defuse US-North Korea tensions," the magazine claimed.

"Why should there be a legally binding contract?" McGregor asked in response. "Real negotiations on major deals take months and sometimes years before both sides can reach an agreement."

According to the CCTV commentator, the Singapore Summit that took place on June 12 was just the first step in a long process. McGregor foresees that the end result will be peace on the Korean Peninsula, an end to economic sanctions imposed on Pyongyang and strong bilateral ties between Washington and Pyongyang.

"But that will not happen overnight," he stressed. "This is a long process and will likely take a few years so as to establish trust and mutual cooperation on both sides. Right now, a hand shake is good enough, because former President Barack Obama could not even reach that little step."

"We have no time limit. We have no speed limit," Trump told reporters on July 17. "Discussions are ongoing, and they're going very, very well."

Besides, the US president tweeted that Moscow had agreed to provide its assistance in the US-North Korea negotiations: "Russia has agreed to help with North Korea, where relationships with us are very good and the process is moving along. There is no rush, the sanctions remain! Big benefits and an exciting future for North Korea at the end of the process!"

….Russia has agreed to help with North Korea, where relationships with us are very good and the process is moving along. There is no rush, the sanctions remain! Big benefits and exciting future for North Korea at end of process!

​The views and opinions expressed by the contributors do not necessarily reflect those of Sputnik.