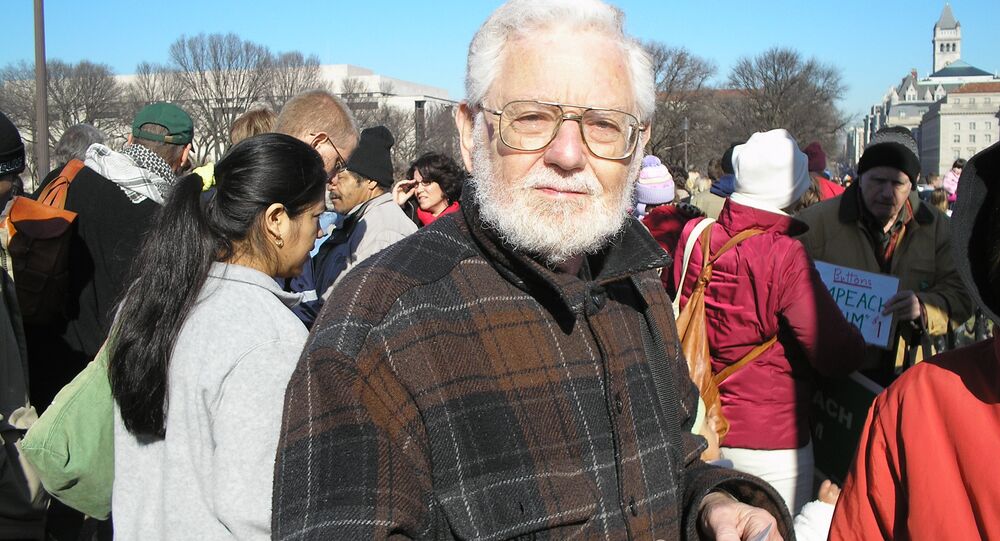 The United States’ foreign policy is all about "world domination" and not the spread of democracy as US leaders claim, according to American author and foreign policy analyst William Blum.

"Whatever the actual effect of an American intervention, the intention is never the spreading of democracy," Blum told Sputnik’s Spanish service.

"The intention is a regime change to put into power, or retain in power, forces more amenable to the goals of US foreign policy."

Blum worked for the State Department in the 1960s, and despite long-held dreams of becoming a Foreign Policy Officer, he left the agency in 1967 after growing disillusioned with the United States’ intervention in Vietnam. Since then, Blum has dedicated his career to exposing the consequences of the US’s interventionist foreign policy.

© Fotolia / Sven Grundmann
Distorted News Subverts Mainstream Western Media Legitimacy
He contends Washington has in fact not only played a part in supporting brutal dictatorships abroad, but additionally played an active role in ensuring their survival.

Giving the examples of key US allies such as Saudi Arabia, Honduras, Egypt, and Qatar, the author notes "it would be difficult to name a single brutal dictatorship…that was not supported by the United States."

More specifically, according to Blum, the US’ foreign policy which ostensibly seeks to promote democracy has in fact resulted in the birth of the self-proclaimed Islamic State (IS).

"IS would not exist if not for the US," he said.

© AP Photo / Jim MacMillan, File
A Fake Caliphate: Perfect US Strategic Asset
Washington has successfully eliminated the secular governments needed by the people in the Middle East that are currently suffering the most from Islamic extremism, Blum argued.

Afghanistan, he noted, was ruled under a "relatively progressive" secular government in the 1970s and much of the 1980s. That was until the "United States overthrew it, allowing the Taliban to come to power."

Then came Iraq, which Blum posited was "another secular society, under Saddam Hussein," until the US’ invasion in 2003. "Now," he said, "The country is overrun by crazed and bloody jihadists and fundamentalists of all kinds."

© RIA Novosti.
Clinton E-Mails Reveal State Dept Obsessed With Toppling Foreign Leader
Washington continued to play its hand in regional politics through its involvement in the 2010-2011 Arab Spring, Blum noted. He pointed out that Libya had the highest standard of living among countries in Africa under Muammar Gaddafi who, "like Saddam Hussein, had a tyrant side to him, but could in important ways be benevolent and do marvelous things for Libya."

Following the NATO-led coalition air strikes on Libya and Gaddafi’s death in 2011, however, Blum said now the country has been reduced to a "failed state."

The same can be seen in the conflict in Syria, where Washington has "been doing its best to overthrow the secular government," as the country turns into "a playground and battleground for all manner of crazed and bloody jihadists and fundamentalists, including everyone’s new favorite, the Islamic State."

The ongoing conflict in Ukraine, according to the author, is another example in which Washington’s involvement has only served to deteriorate the situation.

Asked about his views on the EU’s involvement there, Blum did not mince words: "The EU has been used by Washington in its new cold war against Russia," he said, suggesting that the Union needs more "backbone to stand up to the US."

"The US has to lose its obsession with world domination," Blum said. "There’s nothing the rest of the world can do except join together and deliver a strong military blow to the US."