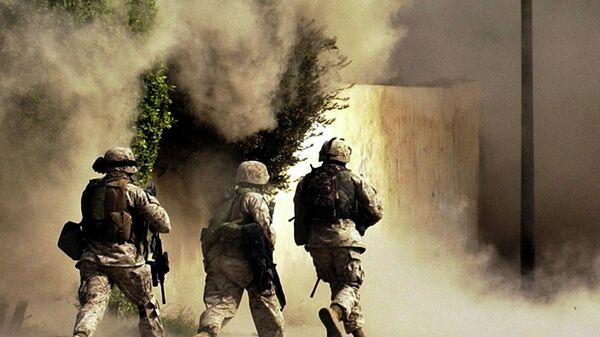 Yet neither US President Barack Obama nor any of the 22 heavily weaponized nations/vassals theoretically part of his coalition of the willing sent at least a single Hellfire missile-equipped drone against the black-clad fake Caliphate goons.

A case can still be made that the “civilized” West would rather deal with a medieval, intolerant Wahhabi-drenched Caliphate than with a secular Arab “dictator that refuses to prostrate himself in the altar of Western neoliberalism.”

In parallel, the case has already been made that those who weaponize the beheaders and throat-slitters of Al-Nusra, aka al-Qaeda in Syria, or ISIS/ISIL/Daesh are essentially Saudis – the largest importers of weapons on the planet — who buy mostly from the US but also from France and the UK.

Hypocrisy? The US Shows Its Own Lack of Will When It Comes to ISIL
And now, an August 2012 declassified document from the US Defense Intelligence Agency (DIA), circulated to everyone from CENTCOM to the CIA and the FBI, and obtained by public interest law firm Judicial Watch, finally confirms what passes for Washington’s strategy in the Levant and the Arabian peninsula.

And just as much as the original, CIA-funded proto al-Qaeda, established in the 1980s in Peshawar, ISIS/ISIL/Daesh, a.k.a. al-Qaeda 2.0, fulfills the same geopolitical purpose.

The bottom line is that the “civilized” West, side by side with vassals such as Turkey and the GCC petromonarchies, “supported” al-Qaeda’s branch in Syria to destabilize Damascus – even though the Pentagon foresaw the ghastly endgame, as in the emergence of ISIS/ISIL/Daesh (see the detailed breakdown by Brad Hoff)

For the Pentagon though, this was a priceless strategic asset, which should be let loose to “isolate the Syrian regime.”

It’s irrelevant that the DIA report does not state the US government blatantly invented ISIS/ISIL/Daesh, or favors al-Nusra in Syria or the fake Caliphate in Iraq. The key point is that the US government did absolutely nothing to refrain the House of Saud, GCC minions and Turkey from “supporting” the Syrian “opposition” – as in their burning desire to facilitate the emergence of a Salafist breakaway state in eastern Syria and/or across the border, including Iraqi territory.

US, Gulf States to Discuss Strategy Regarding Syrian Opposition
By now every informed observer knows how the Cheney regime-initiated “war on terra” is a fraud. So it’s no surprise the planned, ongoing destruction of “Syraq” keeps offering the US industrial-military complex the perfect excuse for extra-weaponizing, worth billions of dollars, of the House of Saud, other GCC minions, Israel and Iraq.

This confluence of interests — geopolitical for the Pentagon, commercial for the industrial-military complex — completes the scenario of the House of Saud virtually dictating the foreign policy of the self-described “Don’t Do Stupid Stuff” Obama administration in the Levant and in the Arabian peninsula.

There will be a meeting in Paris in early June featuring the 22 member-states of Obama’s coalition. By then the Pentagon should have a real plan on what to do with ISIS/ISIL/Daesh; go for broke and try to annihilate it (very unlikely) or push the goon squads towards the Caucasus (not unlikely). Most likely, the mess will remain as it is.

And Russia Knows All About It

Colonel-General Igor Sergun, head of the Main Intelligence Directorate (GRU) of the General Staff of the Armed Forces of Russia, almost never goes public. So when he does, geopolitical tectonic plates do move.

Sergun’s analysis matches the DIA report to perfection. Russian military intelligence, for years now, has concluded – and is now making it public – that Islamic terrorism”, or in fact the “war on terra” as a whole, is a Western tool used to smash sovereign nations which dare to oppose the hegemon.

And as we all know, of course it’s much easier to subvert and/or smash Iraq, Libya or Syria than Russia or China. Or, for that matter, Iran.

Meanwhile, the Empire of Chaos has to scramble to deal with – or put a brave face on — blowback generated by its Divide and Rule outlook. In Iraq, the fall of Ramadi gave ISIS/ISIL/Daesh a major P.R. boost in terms of strategic reach, recruiting, and fund-raising. They’ve made perfect fools of Team “Don’t Do Stupid Stuff”.

Weak-Willed Iraqi Forces to Blame for Fall of Ramadi - US Defense Secretary
And the US was not even a minor spectator in the debacle. Ramadi fell because the government in Baghdad refused to weaponize Sunni tribes in Anbar province. The fake Caliphate attacked the town with a fleet of 30 trucks loaded with explosives and driven by suicide bombers. Tribals defending it were forced to escape because they knew would be slaughtered by the Caliphate goons.

What was the Pentagon doing? Nothing – contradicting Pentagon supremo Ash Carter’s misleading accusation that Iraqi forces lacked “will to fight”.  The Pentagon also did nothing in Tikrit, when the Americans refused to fight against the fake Caliphate alongside Shi’ite militias led by officers from Iran answering directly to al-Quds Force superstar Qassem Suleimani.

It’s Iran Against the Beheaders

Now the fall of Ramadi makes it plain that the real power fighting ISIS/ISIL/Daesh in Iraq is Iran, not the US. Shi’ite militias are already in the process of being incorporated into Iraq’s security forces.

Ezzat al-Douri, the former number two of Saddam Hussein — still not captured by the Americans — has been releasing messages invoking much need weaponized help from the usual suspects, Saudi Arabia, even as the Saudis tried to weaponize the tribes in Anbar via Jordan. Guess who said “no”? Washington. According to the Obama administration’s wobbly rules, Jordan could only do the Saudi’s bidding with a direct authorization from Baghdad, which never came.

US Created Islamic State to Redraw Map of the Middle East – Iranian General
This mess is just an example of the perennial double game played by the Empire of Chaos in its “war on terra” – which boils down to the fight against ISIS/ISIL/Daesh across “Syraq” being nothing more than an elaborate farce.

And whatever happens in Washington in the near future, either under Hillary “We came, we saw, he died” Clinton or Jeb “My brother was right to invade” Bush, there is no evidence the US government will ever cease from using “Islamic terrorism” as a strategic asset.