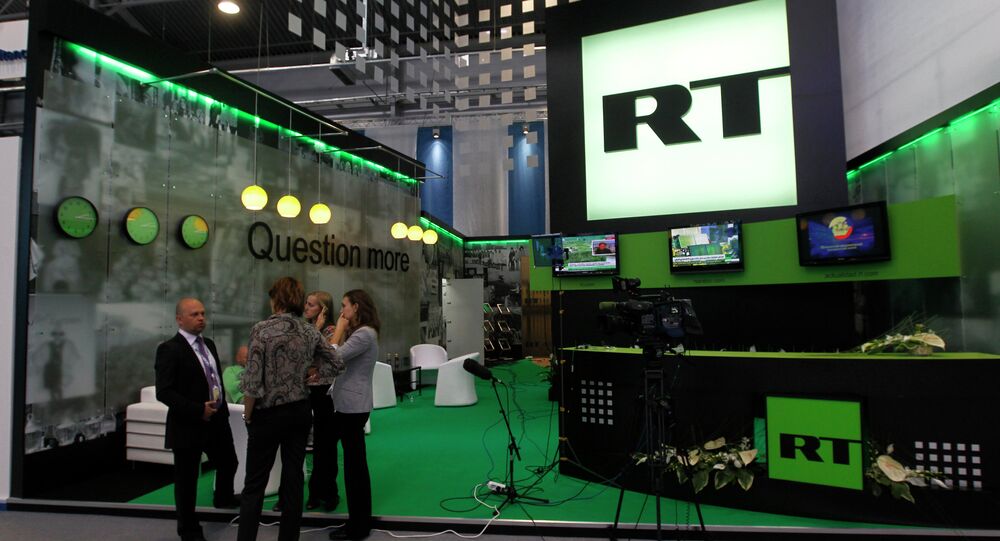 Frustrated with the growing popularity of international media outlets, such as RT and Sputnik, the US Congress held the latest in a long list of hearings, trying to figure out why more and more Americans – and people around the world – turn to alternative news sources and abandon the mainstream media.

© Flickr / Reid Rosenberg
America Goes Large: Obama Wants Huge Budget for His Anti-Russian Troll Army
However, Congress wouldn’t be Congress without a bit of fearmongering, adding a sense of urgency and importance to the subject. Therefore, a hearing organized by the House Foreign Relations Committee was titled "Confronting Russia’s Weaponization of Information." Listening to speakers invited to testify at the hearing, one could indeed fall under the impression that they are talking about combat actions or war games rather than TV and radio programming.

"During the Russian invasion of Crimea last year, most of the world’s journalists seemed confused," Peter Pomerantsev, senior fellow with the Legatum Institute, said during his opening remarks before the committee. "Russia has launched an information war against the West – and we are losing."

Not surprisingly, Mr. Pomerantsev forgot to mention that an absolute majority of the Crimean population voted on a referendum to reunite with Russia, of which the peninsula was a part of for hundreds of years. But this sort of bias prevailed during the entire hearing, to the point that even one of the senior committee members, Republican Dana Rohrabacher, was taken aback, saying that he would like to see witnesses who could present a different opinion to "balance this out in a way that perhaps could have compared our [US news] system to the Russian [news] system, and to find out where that truth is."

© Sputnik /
One For The Money, Two For The Show

Ironically though, the hearing aimed at criticizing media bias didn’t present differing takes from guest speakers. Another "expert" invited to unveil reasons behind the growing popularity of alternative media outlets was former RT employee Liz Wahl, who gained notoriety after resigning from the network on air, following months of preparations. The move was denounced by the media organization as "nothing more than a self-promotional stunt." According to Wahl, RT is not a traditional network, but rather a "cult" promoting conspiracy theories which brainwash its mostly young followers.

"We are dealing with an organization that doesn’t play by the rules," Wahl said.

This raised the question, then, why RT and others are becoming so popular. The US far outspends Russia in its foreign broadcasts. The Voice of America and Radio Free Europe/Radio Liberty have been broadcasting in Russia for decades. And still, according to the testimony of Helle Dale, Senior Fellow for Public Diplomacy at the Heritage Foundation, US government-funded media has no influence on Russian audience at all: Voice of America's site ranks 3,828 in Russia, while RT ranks 61.

"[Radio Free Europe/Radio Liberty]’s presence and reputation in Russia, it must be added, took a beating in 2012…" Dale admitted, due to bad management and the loss of qualified journalists. She also noted that RT is "flourishing," despite its "unsophisticated audiences."

"Unsophisticated audiences" which are attracted by the topics, views, and opinions which they can't find on mainstream channels, all speakers had to admit. But instead of suggesting a change in the way traditional networks cover the news, they went on blaming the scary Russian propaganda machine for becoming more and more popular.

Despite sharp criticism of the Broadcasting Board of Governors, which manages US-funded news outlets in foreign languages, the goal of the hearing was pretty obvious. Earlier this year, the BBG requested an additional $15.4 million to expand its Russian-language programming and social media content. To justify such a bill, one has to present an alternative point of view as something no less ominous than a national security issue. This always helps get taxpayers dollars for the cause. By comparison, BBG's combined communication and outreach efforts against the self-proclaimed Islamic State amount to just  $6.1 million.