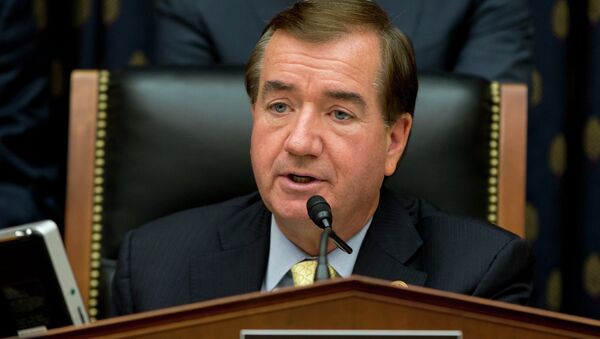 © AP Photo / Carolyn Kaster
Subscribe
US Congressman Ed Royce said that the United States is "getting beat by Putin propaganda."

US Expands Russian-Aimed Propaganda Budget by More Than 100%
WASHINGTON (Sputnik) — The Russian press beating the United States along with a floundering US foreign broadcasting prove the need to reform Washington’s media agency, US Congressman Ed Royce said in a release.

“Our nation is getting beat by Putin propaganda and our international broadcasting is floundering. It’s unacceptable,” Royce stated in the release.

Royce stressed the Broadcasting Board of Governors (BBG), an independent federal agency of the US government supervising all government-supported civilian international media, must be reformed.

US Media Bigwig Who Compared RT to ISIL Quits After Just Six Weeks in Job
His statements echoed earlier calls by the US Office of the Inspector General and the US Government Accountability Office for conducting far-reaching reforms.

“For too long, the BBG has lurched from crisis to crisis, destroying the reputation of brands like the Voice of America and Radio Free Europe in the process,” Royce said.

“Over the years, defenders of the status quo have argued that the BBG is generally on the right track and that only minor reforms or hiring the right CEO would do the trick,” he added.

Royce’s statement comes after the resignation of BBG Chief Executive Officer Andrew Lack, who left the post after 42 days in office.

“This resignation, once again, leaves the BBG truly rudderless,” Royce said, adding that in reality, the BBG’s problems go far beyond one person or one office. “CEOs come and go, yet the BBG limps along.”

RT Under Attack for Challenging US Media’s Foreign Policy Narrative
US Assistant Secretary of State for European Affairs Victoria Nuland announced on Tuesday that the US State Department has increased funding for Russian-language broadcasting over 100 percent from spending levels during the 2014 Maidan protests.

Nuland added that the BBG will commit $23.2 million to Russian language broadcasting referred to as “Russian propaganda.”

The State Department is also requesting an additional provision of more than $20 million in assistance to promote US-supported broadcasts to ramp up efforts to counter lies with truth.

The US Congress has already authorized $10 million for 2015 to promote alternative Russian-language broadcasts in Ukraine and other Eastern European countries through the 2014 Ukraine Freedom Support Act.