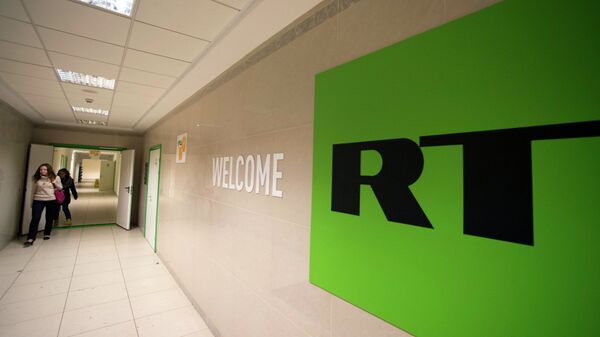 Experts comment on the recent statements made by the CEO of the US Broadcasting Board of Governors (BBG), Andrew Lack, who lumped RT together with the Islamic State, calling them ridiculous.

US NGO Says RT’s Alternative Coverage is a Protected Form of Free Speech
WASHINGTON, January 27 (Sputnik) — RT provides solid alternative news coverage that is less driven by propaganda than US media outlets, so Washington's foreign policy establishment is upset over the US narrative being challenged, experts have told Sputnik.

"I like RT. I think they give good news coverage and cover stories not covered elsewhere. I find their commentators more objective and less propagandistic than most of the parallel commentators on FOX, for instance," US National Intelligence University retired instructor on Middle East Studies, Dr. Max L. Gross, told Sputnik Monday.

Gross was reacting to statements made by the CEO of the US Broadcasting Board of Governors (BBG), Andrew Lack, who lumped RT together with the Islamic State (IS) extremist group as threats to American interests, which Gross found "ridiculous", saying it was like comparing apples to oranges.

A number of RT commentators have been very critical of "Corporate" America, whereas Fox is very supportive of US policy regardless of the situation, the former military intelligence officer explained.

State Dept. Says RT Not in Same Category of US Concerns as Terrorist Groups
"We [the United States] are just good, period. Nothing to be critical about," Gross said, mocking the US foreign policy.

According to Gross, the West is more to blame for the conflict in Ukraine than Russia. "But you won't hear that on any American network," he said.

Authors Elizabeth Gould and Paul Fitzgerald, who write extensively on media coverage of foreign affairs, have said that the foreign policy establishment in Washington is displeased that RT has successfully challenged the false foreign policy paradigm promoted by US media outlets like FOX, CNN, the New York Times and Washington Post.

"Now the anger at Russia is far worse because Russia was not supposed to emerge out of the collapse of the Soviet Union as a world leader, challenging the US narrative that America 'won' the Cold War, which RT has consistently exposed as false," the experts told Sputnik Monday.

Meanwhile media business analyst and consultant William Dunkerley pointed out in an interview with Sputnik that comments by Andrew Lack are full of misconceptions, and might have a negative effect on US-Russia relations.

US Media Head Lumps RT, Islamic State Together
"It sounds to me like he's just getting mixed up. Someone should straighten him out quickly. Things have been pretty tense lately between the US and Russia over the Ukrainian crisis. If Lack is allowed to charge forward with all the misconceptions that are apparently in his head, he could very well make matters worse," Dunkerley said Monday.

Lack could be under the influence of comments made in 2010 by then BBG chairman Walter Isaacson, Dunkerley explained, recalling that Foreign Policy magazine reported Isaacson was calling for a larger budget to combat the public diplomacy efforts of America's "enemies", which he identified as Iran, Venezuela, Russia, and China. However, the quote Lack could have seen was false and spliced together from two unrelated paragraphs, the expert said.

"Isaacson never talked about Russia and China as enemies, but instead as competitors in influencing global opinion," Dunkerley explained.

RT's editor-in-chief Margarita Simonyan said that she was ''extremely outraged'' by Lack's comments. The channel intended to demand explanations from the BBG, the US State Department and the US Embassy in Russia on why it was compared to extremists.

US State Department Spokesperson Jen Psaki claimed last week that RT and terrorist organizations IS and Boko Haram should not be labeled together.

The BBG is an independent federal agency of the US government. It supervises all US government-sponsored civilian international media, such as Voice of America, Radio Free Europe/Radio Liberty, the Middle East Broadcasting Networks and Radio Free Asia.

Since 2007, the BBG has been at or near the bottom in the Best Places to Work in Government Survey.