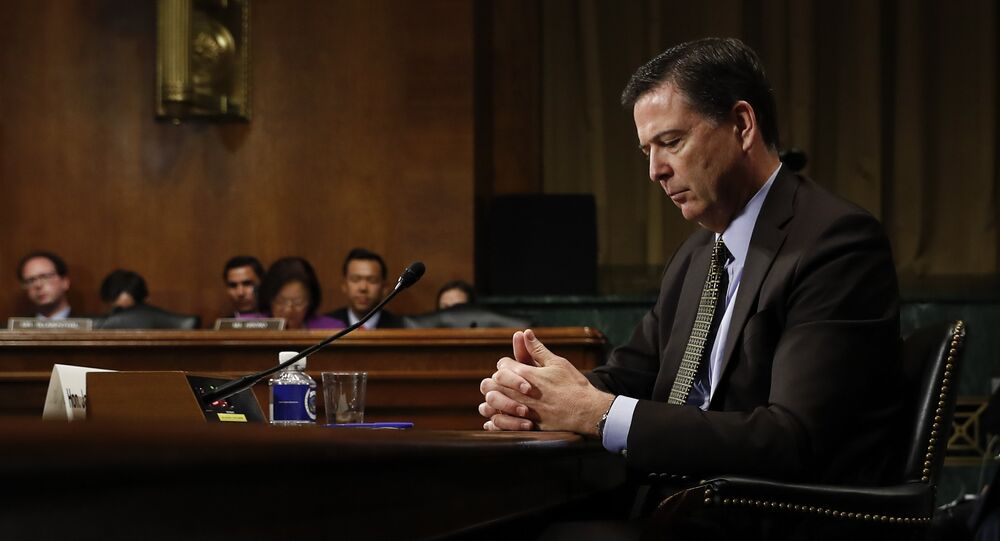 The main question circulated by the US mainstream media was whether Trump made efforts to thwart the investigation into alleged Russian "interference" in the US 2016 presidential election. The other question was whether the US president was himself a subject of the inquiry.

"I found his testimony ineffective in making a case against President Trump for obstruction of justice; instead, he demonstrated that he is a weak man who previously served as head of America's foremost investigative service, which is a scary thought given the array of threats we and he faced during his tenure as FBI chief from September 2013 through May 2017," Ortel responded.

Furthermore, it appears that Comey has found himself in the very same trap he purportedly tried to set for Donald Trump.

"Perhaps Comey thought he might exonerate himself, but I believe it did the opposite," Ortel said.

© Fotolia / Serkat Photography
Keeping an Eye on Trump: CIA Whistleblower Points Finger at Clapper, Brennan, Comey
"It makes me wonder even more why Barack Obama selected him and then to re-examine the course of his career from his role investigating the Whitewater land deal around 1996, to his role investigating the Marc Rich pardon [by then-President Bill Clinton] and the Clinton Foundation through 2005, and his failures to make progress, while FBI director, securing indictments and convictions against Clinton 'charities' for solicitation and other frauds from October 23, 1997, to the present," the Wall Street analyst highlighted.

Commenting on the former FBI director's dismissal in his May interview with Sputnik, Ortel drew attention to the fact that although Comey could have caught the Clintons red-handed many times he had never jumped at those opportunities.

Meanwhile, to the apparent disappointment of Trump's opponents, Comey said "no" to both whether Trump tried to obstruct the "Russian inquiry" and whether the US president was himself under investigation.

For instance, it turned out that former Attorney General Loretta Lynch pressured Comey to downplay the Clinton email server inquiry and refer to it as a "matter," not an "investigation."

Interestingly enough, on February 2, 2016, the FBI indeed "acknowledged generally that it [was] working on matters related to former Secretary Clinton's use of a private email server."

Comey also admitted that it was he who leaked his memo of private conversations with President Trump to the US press via his "friend."

James Comey admits to being a leaker; used cutout to leak to NYTimes to get a special council appointed https://t.co/t16LBoJgoi

​As a result of the leak, on May 11, The New York Times published an article with the eloquent title "In a Private Dinner, Trump Demanded Loyalty. Comey Demurred."

"James Comey better hope that there are no "tapes" of our conversations before he starts leaking to the press!" Trump tweeted on May 12.

​Another controversy was sparked by Comey's inexplicable reluctance to get it out that Trump was not personally under investigation.

As Senator Marco Rubio wittily noted, "The only thing that's never been leaked is the fact that the president was not personally under investigation."

James Comey says he has no doubt that Russia hacked the DNC even though the FBI never looked at the DNC server.

​It still remains the million-dollar question why the FBI didn't demand access to the DNC server rather than relying on the findings of some private investigative firm.

Comey reiterates that the FBI never gained primary access to the DNC's servers. Why isn't this point ever followed up on? pic.twitter.com/rojfqs7drb

​In his written testimony Comey noted that in a private conversation Trump told him that the Russia investigation was "a cloud" that was thwarting his ability to act on behalf of the country. Was Comey interested in prolonging the inquiries into the Trump campaign's alleged "collusion" with Russia to keep that "cloud" in place?

"One hopes, of course, that the FBI director would be above politics, but I believe Comey failed miserably once he got distracted considering political implications during 2016, instead of riding investigations as hard as possible into potential criminal activities involving Hillary Clinton, her family and her campaign, as well as all related matters," Ortel responded.

© AFP 2021 / Robyn BECK
FBI Spying Machine: Who Allowed US 'Deep State' to Overstep Its Bounds
Why was Comey reluctant to find a way to get it out that the FBI wasn't investigating Trump?

"Comey admitted that he gave in to Loretta Lynch's request to miscast the real Clinton 'investigation' as a 'matter' starting by July 2016 — so, I am guessing, he likely became willing to countenance and even play a role in plans that retarded the ability of the Trump transition and the Trump administration to advance its agenda after the election result," the Wall Street analyst assumed.

"I think Loretta Lynch's meeting with Bill Clinton, and Hillary Clinton's subsequent public suggestions that she may have been willing to keep Lynch on in her administration as Attorney General, as well as appoint Barack Obama to the Supreme Court also deserve close scrutiny," he added.

Who could benefit from the ambiguous situation around Trump's role in the Russia investigation?

© Photo : YouTube/BNO News
Unresolved Murder: Why Seth Rich's Case is Key to #TrumpRussia Investigation
"In my opinion, the theoretical beneficiaries of the ambiguities are the Clinton wing of the Democrat party, the Obama wing of the Democrat Party, and the Never Trump (Romney/Bush) wing of the Republican Party — I call these elements (with others) the 'Uniparty'," Ortel said.

First, the Foreign Intelligence Surveillance Court (FISC) revealed that the FBI might have illegally shared "raw intelligence" on Americans with third parties, thus supposedly violating the Fourth Amendment. Was Comey unaware of that when he asserted to Congress in April 2017 that all information used by the bureau was "lawfully collected" and "carefully overseen and checked"?

Second, former CIA/NSA contractor Dennis Montgomery sued Comey and other current and ex-government officials, citing the FBI's alleged attempt to cover up evidence showing widespread illegal spying on Americans provided to Comey by the contractor a few years ago.

Third, President Trump's lawyer Marc Kasowitz stressed in his statement that Comey's leak to the press was nothing but an "unauthorized disclosure of privileged information."

"We will leave it to the appropriate authorities to determine whether these leaks should be investigated along with all those others being investigated," Kasowitz emphasized.