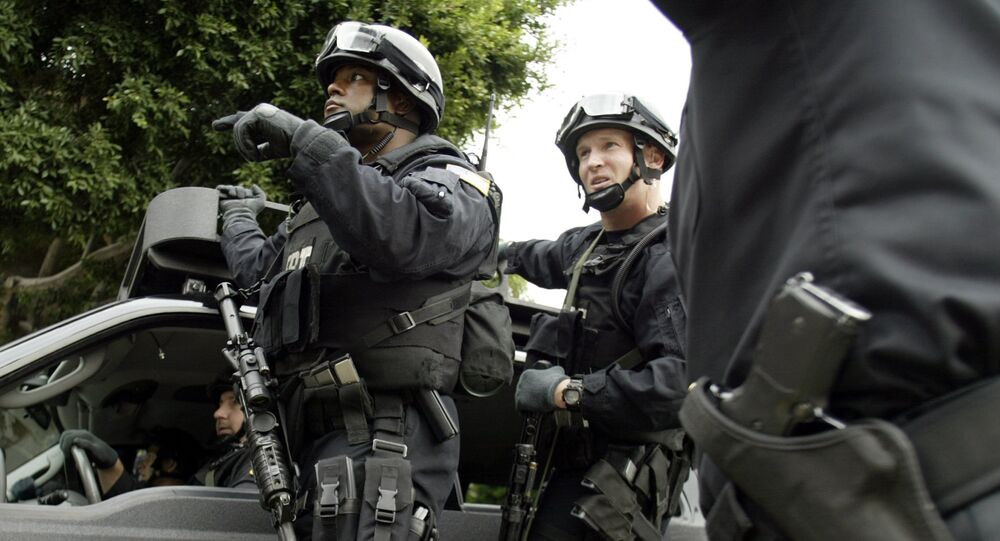 It appears that the Foreign Intelligence Surveillance Court (FISC) has caught the FBI red-handed: the agency shared intelligence on Americans with non-government parties. "I believe these latest revelations are explosive," Wall Street analyst Charles Ortel told Sputnik, explaining who is benefiting from the FBI's spying practices.

For instance, the heavily redacted FISC memorandum opinion says that "on March 9, 2016, DOJ oversight personnel conducting a minimization review at the FBI… learned that the FBI had disclosed raw FISA [the Foreign Intelligence Surveillance Act] information, including but not limited to Section 702-acquired information, to a… Compliance Report at 92…. is part of the… and 'is largely staffed by private contractors'… certain… contractors had access to raw FISA information on FBI storage systems…. The apparent purpose for the FBI's granting such access was to receive analytical assistance…. Nonetheless the… contractors had access to FISA information that went well beyond what was necessary to respond to the FBI's requests."

The aforementioned episode was nothing but the tip of the iceberg. Amy Jefferies, a privacy advocate who reviewed the FBI's practices, revealed to the FISC that FBI processes "allow virtually unrestricted querying of Section 702 data in a way that the NSA and CIA have restrained it through their procedures."

What's worse, the agency "does not distinguish between US and non-US persons in querying its databases," she highlighted.

To add to the embarrassment, back in April former FBI chief James Comey asserted Congress that all information used by the bureau was "lawfully collected" and "carefully overseen and checked."

© AP Photo / Carolyn Kaster
In this Wednesday, May 3, 2017, photo then-FBI Director James Comey pauses as he testifies on Capitol Hill in Washington, before a Senate Judiciary Committee hearing

Will the latest revelations have any implications for former FBI Director Comey and will the investigation into the FBI's violations continue?

"I believe these latest revelations are explosive, especially when they are reviewed comparing the testimony previously provided to the House of Representatives, and to the Senate by leaders of America's national security services including James Comey," Ortel told Sputnik.

© Fotolia / Serkat Photography
Keeping an Eye on Trump: CIA Whistleblower Points Finger at Clapper, Brennan, Comey
"All public servants, including particularly those in the security services, are required to 'protect and defend the Constitution of the United States of America' — instead, it seems that too many throughout our various local, state, and federal governments have become willing to use their supposed service and contacts gleaned, to later get involved taking high-paying positions from various parties who need or can benefit from government actions, or inactions," the Wall Street analyst said.

Ortel remarked that following the dire events of 9/11 the American public appeared to turn a blind eye to the US security apparatus significantly expanding its powers.

"So the public at large, the media, legislators and judges, it would seem have allowed what we refer to here as 'the Deep State' to significantly overstep its bounds," he noted.

The analyst highlighted that the American people need and are owed credible explanations concerning what has happened to their personal data and privacy rights.

"If it is true that the Deep State spied on Americans and shared results of their spying, then crimes were committed and those involved must be charged, prosecuted and if found guilty, punished to the fullest extent of applicable laws," Ortel told Sputnik.

© AP Photo / Pablo Martinez Monsivais
House of Cards: Is Assange Right About Hillary Clinton's Plot Against Trump?
The ongoing political struggle between US President Donald Trump on the one side, and the US political and media establishment on the other has exposed tremendous politicization of the US intelligence community.

The US intelligence agencies have actually gone rogue leaking sensitive information concerning the US president to the mainstream media.

The questions then arise: who is behind the politicization of the intelligence community, and when did it all begin?

"As a guess, this plan evolved during the many White House and off-site meatings near the White House that began after January 20, 2009, when Barack Obama was inaugurated," he assumed.

He noted that if one looks through publicly available data — the Bureau of Economic Analysis, National Income and Product Account Data — one will see that the size of America's federal government has ballooned and that the sums spent on "private contractors" and supplies have become enormous.

"Numerous donors to both parties clearly seek to gain tangible advantages — so the data that politicians and their aides get access to can be quite valuable. As happens, like it or not, markets develop and it is obvious that many poor politicians end up being quite rich following years of 'service,'" Ortel remarked ironically.

"Though it may take time to see these records, fortunately, records are kept — the American public does need to see many files that the Obama administration has strenuously resisted sharing, even though they are, in fact, required to share this information," he added.

"Here I am thinking about the still missing Clinton emails (including attachments)," Ortel, who has been investigating the Clinton Foundation's alleged fraud for the past few years, noted. "With these in hand, investigators then might have the leverage they need to compel testimony from the individuals named above, their associates and other."