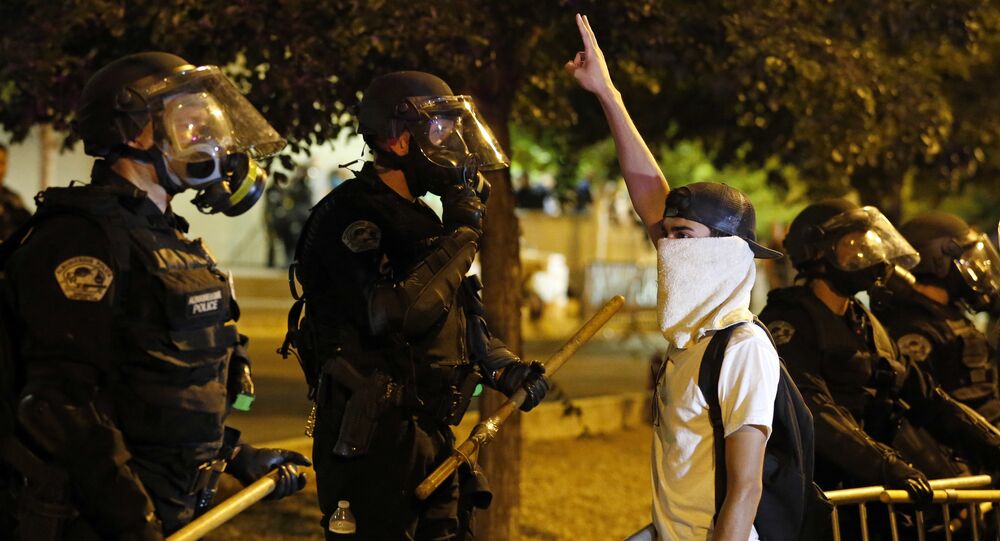 The United States is engulfed by the American civil war 2.0, Russian political commentator Dmitry Kosyrev wrote for RIA Novosti, stressing that despite the US mainstream media narrative, the Trump administration's machine is up and running, shifting the established balance of power in the country step by step.

The American civil war 2.0 is not just a figure of speech: the bitter conflict has been raging on in the United States over the last few years, Russian political commentator Dmitry Kosyrev writes for RIA Novosti.

"Democrats are doing wild, suicidal things because they are not just on the defensive, but on the verge of collapse, as the Trump administration breaking down their 'evil empire'… Their goal is not the destruction of Russia, but the salvation of their own project," Kosyrev pointed out, referring to the ongoing scandal over alleged "Russian interference" in the US 2016 presidential election.

Kosyrev quoted Russian President Vladimir Putin who called attention to the fact that "the growing political schizophrenia in the United States" threatens to upset the balance in the country.

"They are using anti-Russian slogans to destabilize the internal political situation in the United States, but they do not realize that they are harming their own country. If this is the case, then they are quite simply stupid. If they do understand what they are doing, then they are dangerous and unscrupulous people," Putin told journalists following Russian-Italian talks Wednesday.

© Sputnik / Alexey Filippov
America's Civil War II
At first glance, the ongoing conflict bears no resemblance to the American Civil War of 1861-1865; however, this civil hybrid war is no less bitter, according to the commentator.

While former Chairman and CEO of Fox News Roger Eugene Ailes had managed to "give conservatives a voice," as Ken McIntyre of The Daily Signal recently noted, the Democrats, liberals, and globalists have been maintaining a "monopoly" over the US mainstream media for years.

"Democrats do not have a majority in Congress or their own army, but the war they have been waging is a hybrid one," the commentator wrote.

"Therefore, in the media zone, they are advancing with a wild, schizophrenic rage. However, they haven't yet fully monopolized this sphere," Kosyrev noted, adding that their outrage against the very existence of the Russian English-language TV channel Russia Today is also a "military phenomenon."

Meanwhile, the Republicans are striking back.

© AFP 2020 / Nicholas Kamm
Did Trump Spark a ‘Political Civil War’ in Firing Comey?
Citing the US Immigration and Customs Enforcement agency, Kosyrev underscored that in April the number of illegal immigration arrests increased by 40 percent, thwarting Barack Obama's old plan to flood the country with millions of migrants.

"It was assumed that they would all vote for the Democrats," the journalist remarked.

On the other hand, the Trump administration is seeking to give a green light to numerous small banks to boost the economy. However, this would deal a blow to the Democrats' allies in the Big banking sector.

"The essence of what is happening is that the Republicans are now advancing," he explained, "It simply happens in dozens of small, internal episodes."

In this context, Donald Trump is by no means a cornered inept manager awaiting the impeachment, as the liberal press is describing him, Kosyrev wrote, adding that Trump's political machine is up and running, instilling fear in the US president's political opponents.

"As one could see, the Democrats have a lot to lose in this war," the commentator said, adding that the ongoing civil war still has no end in sight.

© REUTERS / Jim Lo Scalzo/Pool
Democrats Going to Do Whatever It Takes to Impeach Trump
British political analyst and a regular contributor to Sputnik Finian Cunningham shares a similar stance.

"Today, the United States of America seems to be at war with itself again," Cunningham wrote in his recent op-ed for Sputnik, "Not yet an all-out bloodletting as in the Civil War of 1861-65, but nevertheless the nation seems to be plunging into an internecine process of shredding itself, pulling down the very edifice of the state."

The British political analyst noted that the US political and media establishment, the intelligence community, the Pentagon, the US government and numerous non-government entities are currently engaged in the conflict.

"The people attacking American democracy are American, not Russian or anyone else. The country is at war with itself… America's Civil War II is underway and it's a war over whether democracy in that country exists or not. Old Glory is being shot to pieces and the victors have yet to emerge," he wrote.