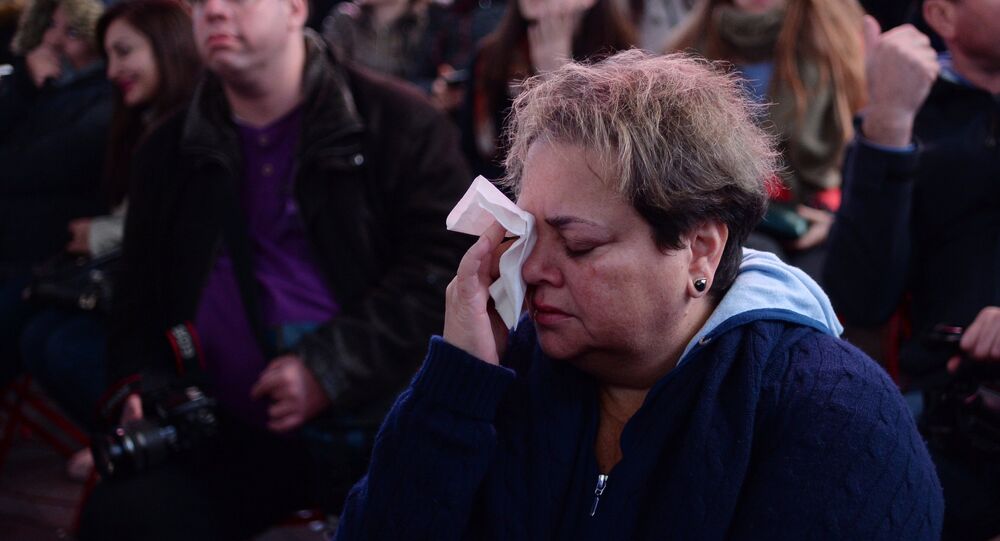 Civil wars are perhaps the most tragic and bitter, when a country goes to war on itself – and it’s brother against brother, homesteads destroyed by other compatriots.

Today, the United States of America seems to be at war with itself again. Not yet an all-out bloodletting as in the Civil War of 1861-65, but nevertheless the nation seems to be plunging into an internecine process of shredding itself, pulling down the very edifice of the state.

There’s even reports of married couples splitting in divorce because of the growing political divisions.

© REUTERS / Mike Blake
Sustained Growth? How Trump's New Tax Plan Could Influence the US Economy
The governing business of running the country is held hostage by incessant political scrapping; the institutions of governance appear in meltdown from eroding authority.

This time around, it’s not northern states versus the south, or over industrialists wanting to usurp landowners, or moral questions of race and slavery. The current war is due to powerful factions within the political class not willing to accept the election of Donald Trump.

Trump was not supposed to win the presidential election in November 2016, as far as ruling class elements were concerned. His Democrat rival Hillary Clinton was the favored candidate owing to her deep connections to the foreign policy establishment and corporate news media.

© REUTERS / Brian Snyder
On the Warpath: Clinton 'Building New Political Group' to Counter Trump's Agenda
Trump’s avowed stance to normalize relations with Russia was the number-one bugbear for the US establishment which preferred Clinton’s more hawkish outlook as part of extending its global hegemonic ambitions.

As always, the American ruling class is variegated. No doubt there are powerful Wall Street and corporate factions among American capital that are indifferent about the actual election result, or perhaps even rather pleased by it. Trump, so far, seems to be rather disposed to pandering to corporate America with generous tax-breaks for the wealthy, so there is no problem there for many among the American ruling class.

Where the problem arises is more within the political class of foreign policy establishment, straddling the Republican-Democrat career politicians in Washington, the intelligence community and the security-military apparatus, the CIA, Pentagon and their assets or class sympathizers within the corporate media. This is the deep state complex, although not all within the deep state may hold the same hostile view of Trump. Enough evidently do in order to sustain a political war against Trump’s presidency.

The whole Russia-gate “scandal” just keeps running and running regardless of objective proof. Never, it seems, has so much political and media time been spent on a nebulous issue which has such negligible substance. It’s a classic case of tilting at windmills.

© AP Photo / Andrew Harnik
'Tricky Tactic': How Trump's Opponents Seek to Bind His ‘Hands and Feet' Using Russia as a Pretext
Earlier this week, James Clapper, the former national intelligence director, reiterated in a media interview that he has seen no evidence of “collusion” between the Trump election team and Russian state agents. Clapper then goes on mealymouthed to say: “I can’t confirm or deny it”.

People like Clapper and the former FBI chief James Comey continually hint at a Russia-gate scandal, but they never present any evidence. They should either put up or shut up. For to not do is nothing less than political witch-hunting. The purpose of which is to undermine President Trump’s mandate. And it is all given full vent by politicians and media who wittingly or unwittingly rally behind the American paranoia of Russophobia.

We may loathe Trump’s personality or his crony-style politics, but the fact is that he was elected on November 8. The question then is: do we accept the result of democracy?

© REUTERS / Jim Lo Scalzo/Pool
'Time Playing Against Trump' as US Elites Struggle to Derail Thaw With Russia
It seems clear that there are elite interests within the US ruling class who do not accept American democracy and the mandate of Trump’s electors. This is a fundamental revelation that goes to the very heart of American democracy, which we are led to believe is the best in the world.

Manifest Destiny, American Exceptionalism, the Land of the Free. It’s evidently all balderdash, self-preening propaganda. For American democracy is being shredded by elements within the ruling system who do not accept the result of the last presidential election.

They are covering up their brazen anti-democratic assault on the electorate with outlandish and frankly ridiculous claims of Trump being a Russian agent and about his reliance on Russian cyber-hacking to get him into the White House.

The political witch-hunt continues unabated against Trump, not because of any credible evidence, far from it, but simply because those people fanning the allegations are powerful enough to make sure the witch-hunt remains a dominant focus in public life.

© REUTERS / Carlos Barria
A Threat or a Warning: What is Behind Trump's Recent Remarks to Comey
Last week, Trump fired the FBI’s James Comey for the good reason that he was hamming up the Russia-gate probes. The media claimed this was Trump covering up his alleged Russian links. Twist after twist.

Now this week the US media are full of claims that Trump leaked highly classified information on Islamic State terrorists to Russia’s foreign minister Sergey Lavrov during their closed-door meeting at the White House.

We have the extraordinary spectacle of US politicians and the corporate media accusing a sitting president of lying, betraying state secrets to “a foreign enemy”, and the president’s top national security advisor General HR McMaster being forced to publicly state that the claims are “false”.

In the Clapper interview mentioned earlier, he said that the US was being attacked both externally and internally. The former he said was from Russia. No evidence presented, just the usual assertion and bombast. On the source of internal attacks, Clapper blamed President Trump for “assaulting state institutions”.

The top institution of the US, the office of presidency, is being assaulted by people like Clapper and the establishment who are refusing to acknowledge Trump’s electoral mandate. Systematically, repeatedly, openly calling the president of the country a liar and traitor is the most corrosive assault on the legitimacy of government.

Ultimately, the pre-eminent institution of American democracy – the will of the people – is being assaulted by the same powerful factions.

© Photo : RUSSIAN FOREIGN MINISTRY
Kremlin Dismisses Media Claims on Trump Allegedly Passing Secret Info to Lavrov
This is what Russia’s foreign minister Sergey Lavrov alluded to when he said last week that America was “humiliating itself” by making the unfounded claims that Russia subverted its presidential election. How can the supposedly most powerful nation on Earth, as it continually claims to be, be so vulnerable to alleged Russian hackers?

The people attacking American democracy are American, not Russian or anyone else. The country is at war with itself. It is its own worse enemy, and flailing around with paranoid fears over non-existent threats.

America’s Civil War II is underway and it’s a war over whether democracy in that country exists or not. Old Glory is being shot to pieces and the victors have yet to emerge.