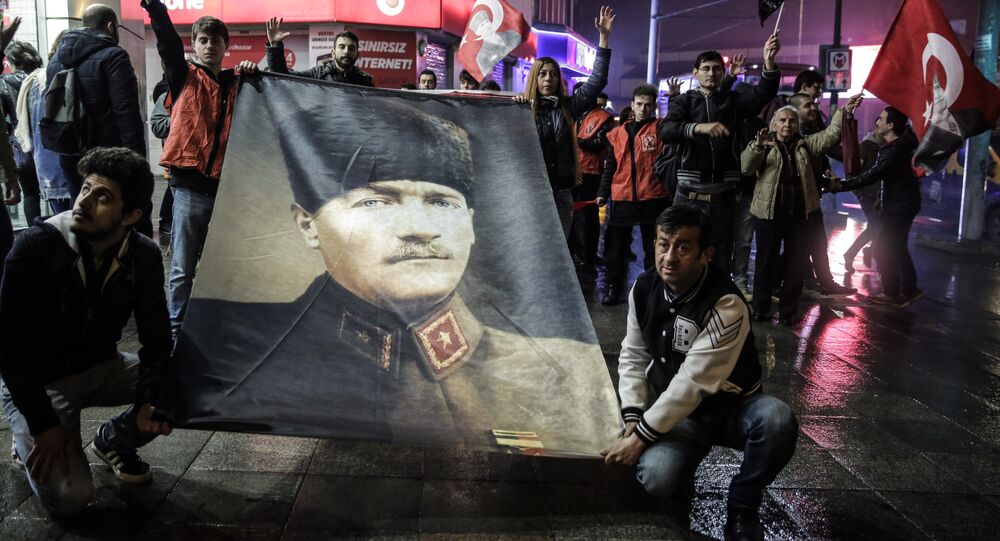 Referendum Controversy: Why Turkey's Weakness Not in the Interest of Russia

The Sunday referendum on shifting to a presidential system has split Turkey down the middle. Commenting on the potential consequences of Ankara's move, Russian academics told Sputnik that Moscow is interested in a strong and stable Turkey as its partner in the Middle East.

April witnessed a Turkish referendum on moving to a presidential system, with the "yes" camp winning 51.41 percent of the vote.

The narrow victory of the supporters of the changes has triggered concerns about the future of the country.

The Haberturk broadcaster reported Tuesday that Turkey's opposition Republican People's Party (CHP) is seeking to annul the results of the government-backed referendum with the Supreme Election Board (YSK).

"There are several possible scenarios of further developments in Turkey," Andrey Boldyrev, Senior Research Fellow at the Eastern Studies Institute of the Russian Academy of Sciences, told Sputnik Turkey.

© Sputnik / Erhan Demirtaş
Turkish Opposition Demands Cancellation of Constitutional Referendum Results
For her part, Elena Suponina, an expert at the Russian Institute for Strategic Studies, said that after obtaining more powers, Turkish President Recep Tayyip Erdogan will try to consolidate the society, which is currently divided over the referendum results.

"As a result of the referendum, Erdogan has concentrated considerable power in his hands. Now the president will try to consolidate Turkish society, divided into two parts," Suponina told Sputnik.

"In response to a number of critical statements I want to emphasize one crucial point: the ruling Justice and Development Party (AKP) is not a radical one. Recep Tayyip Erdogan is a wise politician who understands the importance of maintaining relations with both Russia and the United States," she believes.

Commenting on the possible consequences of the referendum for Russo-Turkish relations, Suponina highlighted that Russia, in contrast to the EU, is not in the habit of meddling in Turkish domestic affairs.

"Europeans like to interfere in Turkey's internal affairs. Russia, on its part, should avoid it. We [Russia] need Turkey as a partner, both in the economic sphere and in the Syrian peace process. The development of Russian-Turkish cooperation is of great importance for both sides," Suponina stressed.

"Turkey needs to strengthen its relations with Russia. It is in Russia's interest to have a strong Turkey as its partner. Conversely, the weakening of Turkey in the region contradicts strategic interests of our country, because an unstable Turkey will create problems for Russia in the Black Sea region," Fenenko told Sputnik.

"As a result of the constitutional referendum which took place in Turkey, a strong presidential system of power will be formed in the country," he continued, "Russia needs to maintain cooperation with this system."

"One shouldn't forget that any tension in the relations between Russia and Turkey will play into the hands of the West," the Russian academic highlighted.

© CC0 / Pixabay
EU Calls on Turkey to Investigate Constitutional Referendum 'Irregularities'
At the same time, Nigyar Masumova, Associate Professor of the World Economy Department at Moscow State International Relations University, called attention to the fact that the constitutional changes may have a positive impact on Turkey's economy.

"The results of the referendum will give impetus to the development of the country's economy," Masumova believes, "The Turkish economy has recently demonstrated a serious leap forward in comparison with the 1990s."

"Recently, the Turkish authorities have implemented programs aimed at developing the economy, attracting investment, and launching large-scale infrastructure projects. This is the factor that causes the growth of popular support for Erdogan," she assumed.

"I believe that Erdogan will continue to take steps in this direction, and the period following the referendum will be marked with modernization and progressive changes in Turkey's economy," Masumova told Sputnik.