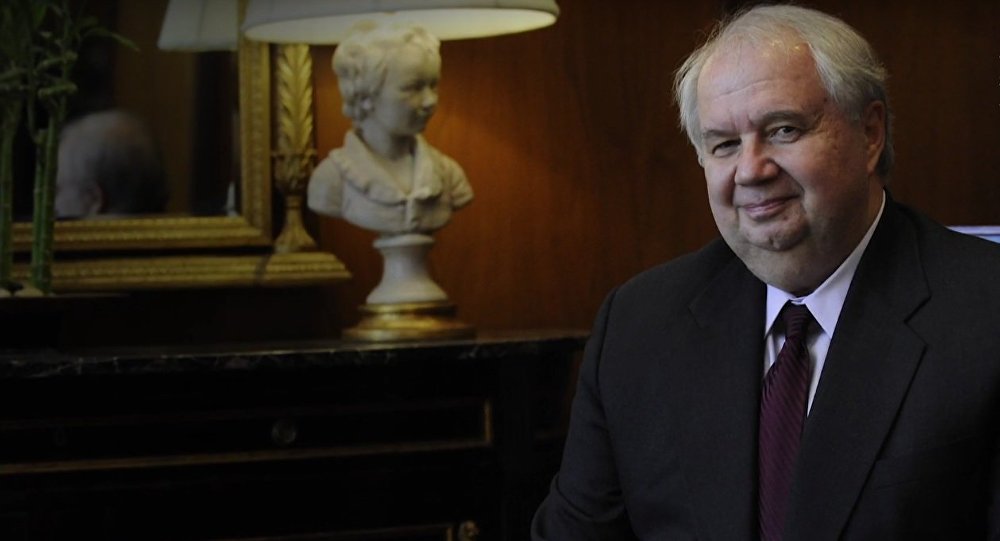 Russian Ambassador Sergei Kislyak is not a "spy," former CIA Director John McLaughlin stated commenting on the media fuss over Attorney General Jeff Sessions' meeting with the Russian diplomat. The former intelligence chief warned against entering into a new Cold War with Russia.

Russian Ambassador Sergei Kislyak is by no means a spy, he is a veteran diplomat, former Acting CIA Director John McLaughlin highlighted while commenting on Attorney General Jeff Sessions' alleged meetings with the diplomat.

"I don't think [Kislyak] is a spy, literally. He is a veteran diplomat, I knew him when he was head of the American Desk in the Foreign Ministry," McLaughlin said answering the question whether Kislyak could have been engaged in what one could broadly be considered "espionage" activities.

© AFP 2019 / ABDELHAK SENNA
US Security Services Regard Russian Ambassador Kislyak as Top Spy, Spy-Recruiter
McLaughlin noted that the Russian Ambassador is experienced at collecting information, adding that this is what diplomats usually do.

CNN reported Thursday that the US intelligence community views Ambassador Kislyak as a "spy" or "spy-recruiter." However, the mainstream media outlet has not provided any evidence to back up their accusations.

"Honestly, I have only one question: is it the rock bottom, which the Western media hit, or is there still somewhere to go?…  I will reveal a military secret: diplomats are working, and their work consists of making contacts in the host nation," Russian Foreign Ministry spokeswoman Maria Zakharova emphasized.

© Sputnik / Kirill Kallinikov
Moscow Condemns MSM Fake Reports About Kislyak, Sessions Contacts
However, the former intelligence chief believes that Attorney General Jeff Sessions and the Republicans in general are in trouble due to the "political heat" surrounding their alleged ties with Russia.

"When I look at this situation, I am trying to get above all of the noise we're experiencing in Washington now. What it tells me is that this administration is not going to be able to investigate this problem itself. Nor do I think actually the Congress will be able to… When you look at the political heat it's been generating my experience in Washington tells me… it's going to be impossible for them to get beyond the partisan dimension of it. There is too much at stake politically, particularly for the Republicans," McLaughlin told MSNBC's Andrea Mitchel.

According to McLaughlin, an all-out investigation into the case is needed to dispel all doubts.

He opined that the Trump administration needs either a 9/11-type commission "with a bunch of people who are widely trusted to look at this dispassionately" or a special prosecutor "with the same dispassionate approach."

At the same time, McLaughlin warned against inflaming a second Cold War with Russia.

"When I was in Russia in October I met with people in both the Kremlin and the Foreign Ministry as part of an academic group. And I came away realizing that we really are close to Cold War Two," he said.

"In truth the President [Trump] has a point when he says we need to think about whether it's possible to have a better relationship with Russia, because when I was there it felt like we are just one mistake away from a shooting war, given the level of tension that you could feel and see in the media," McLaughlin pointed out.

Anti-Russia Forces Smell Blood: What's Behind the Sessions Controversy?
He believes that it is important for the Trump administration to carry out the investigation if it really wants to mend fences with Russia.

Otherwise, anything that they do with Russia would be perceived with suspicion and they wouldn't have the freedom for maneuver that "any President needs in dealing with a potential adversary," he stressed.

Jeff Sessions has come under heavy criticism from the Democrats for his alleged communications with Ambassador Kislyak.

Previously, Trump's former National Security Adviser Michael Flynn resigned after it turned out that he didn't inform Vice President Pence of his conversations with the Russian Ambassador.

However, it appears that that Donald Trump is unlikely to sacrifice yet another member of his team: the US President has recently called the Attorney General an "honest man" who is the subject to a Democrat "witch hunt."

"Jeff Sessions is an honest man. He did not say anything wrong. He could have stated his response more accurately, but it was clearly not intentional," Trump said in an official statement.

"This whole narrative is a way of saving face for Democrats losing an election that everyone thought they were supposed to win. The Democrats are overplaying their hand. They lost the election and now, they have lost their grip on reality. The real story is all of the illegal leaks of classified and other information. It is a total witch hunt!" the US President underscored.

Speaking to Radio Sputnik, Russian political analyst Viktor Olevich suggested that the Democrat's' attack against Flynn and then Sessions is part of a broader plan aimed at impeaching Trump.

In his February interview with Sputnik, Israeli publicist Avigdor Eskin predicted that, after ousting Flynn, Trump's political opponents will continue efforts to tear his administration apart brick by brick.

I am deeply convinced that if Trump doesn't stand this siege and starts taking away bricks from his own ideological building, he will not keep his position," Eskin warned.

To tackle the problem Trump "must stick to his [election] promises and to show complete faithfulness to his team," the Israeli publicist highlighted.

'So Pathetic': Trump Lashes Out at Democrats for Failure to Confirm Nominees

'Still at War': Senator McCain Urges Trump to Boost US Presence in Afghanistan