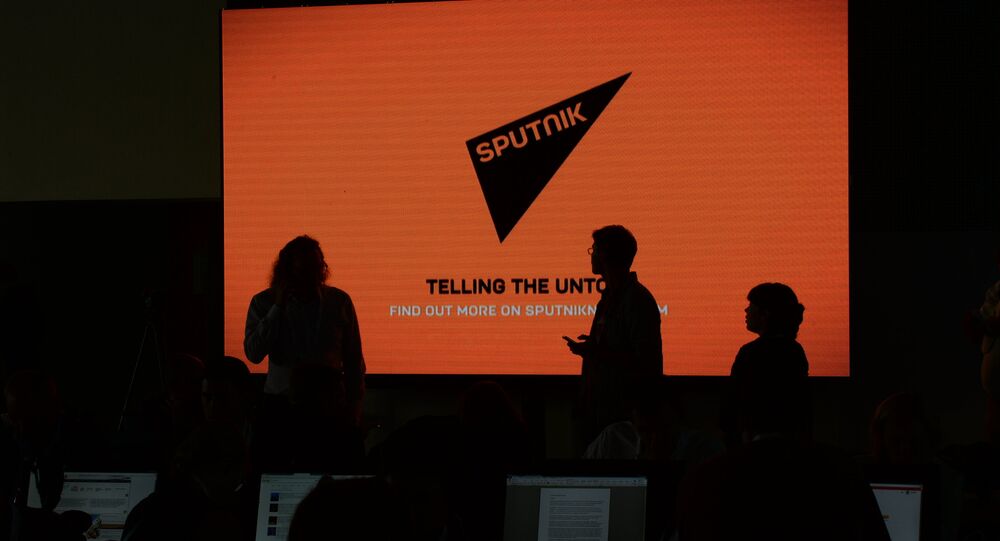 Over the weekend, leading British news media including the BBC, The Times and The Independent published similar, scathing attacks on Sputnik, citing a NATO claim that the news agency was part of a "Kremlin misinformation machine." The allegations aren't new, nor is the lack evidence to back them up. More interesting was what UK media left out.

On Saturday, the BBC, The Times and The Independent released three similar hit pieces on the Sputnik news agency and its 'disinformation' operations in the UK, and cited a NATO official in their attempt to back up their claims.

NATO spokesperson Oana Lungescu told the BBC in no uncertain words that the alliance feels that "outlets like Sputnik are part of a Kremlin propaganda machine which are trying to use information for political and military needs."

© Flickr / Howard Lake
Sunday Times to Stick to Article on UK Brands Allegedly Pulling Ads From RT - Spokesperson
Sputnik's content, Lungescu added, is meant "not to convince people, but to confuse them, not to provide an alternative viewpoint, but to divide public opinions and to ultimately undermine our ability to understand what is going on, and therefore take decisions if decisions need to be made."

Sputnik UK editor Nikolai Gorshkov repudiated the spokeswoman's claims, noting that they bordered on the "conspiratorial," and added that as unpleasant as it is, he's gotten pretty used to having such allegations thrown up against the agency's work. "It's extremely unfair but we've been on the receiving end of other similar accusations in the past, without any substantive evidence being provided," he said.

The attacks have been coming with regularity. Earlier this month, UK Secretary of Defense Michael Fallon accused Sputnik and RT of 'weaponizing misinformation', and urged NATO and the Western powers to "do more to tackle the false reality promoted through Soviet-style misinformation." Russian commentators were amused by the politician's remarks, pointing out that they were a signal that the alternative viewpoints presented by Russian foreign-language media are bringing a much justified end to the mainstream outlets' position as the only game in town for news and opinions.

© Sputnik / Alexandr Kryazhev
UK Defense Secretary's Attack on Sputnik, RT Reveals Panic Over End to Mainstream Media Hegemony
The BBC's piece Saturday seemed to reflect MSM fears. Its lead to the Sputnik story was quite revealing, noting that while "in the world of viral news, [the news agency is] a relative baby," it has "already become so controversial that a NATO spokesperson told BBC Trending that Sputnik is an agent of Russian misinformation."

What is this 'misinformation'? Well, the outlets, particularly The Independent, cherry-picked a couple stories to suit their needs, ignoring the broad extent of Sputnik's coverage, and presenting any gaps in coverage as deliberate, rather than the natural result of covering a developing story.

For example, last year, with terror fears at an all-time high across Europe following a string of attacks in Paris and Brussels, Sputnik published a short piece about German Chancellor Angela Merkel's selfie with Anas Modamani, a young refugee bearing a resemblance to Paris bomb-maker and Brussels attacker Najim Laachraoui. As it turned out, Modamani had no connection to the jihadist, and Sputnik reported as much, citing German media which discovered the refugee's real name and identity.

What was The Independent's take? Sputnik, the online newspaper's Saturday story claimed, "helped spread" the "false claims" and "malicious social media posts" about Modamani's selfie with the Chancellor. Interestingly, the outlet ignored Sputnik's corrections as the story developed, and even the original piece's note of caution that social media users' "assumptions remain unconfirmed." Sputnik even wrote about the refugee's lawsuit against Facebook for the spread of false accusations long after his true identity was confirmed, something The Independent conveniently forgot to mention.

© Photo : Pixabay
Estonian Intelligence Accuses Russia of Waging Information War on EU, NATO
According to The Independent, a second example of Sputnik's attempts to "spread false claims" could be found in the agency's coverage of the story of Lisa F., a 13-year-old Russian-speaking girl in Berlin who accused two refugees of abducting and raping her in January 2016. As might be expected, given the seriousness of the charges, the story received broad coverage, particularly in Russia. In late January, new developments emerged, and the Berlin Prosecutor's Office issued a statement (also reported by Sputnik), saying that they had found no evidence of a sexual offense taking place.

The Independent claimed that Sputnik and the Kremlin was secretly and deliberately pushing the 'rape' narrative in a bid to somehow influence German politics.

In reality, even a cursory glance at Sputnik's coverage shows that the news agency was always careful to emphasize that these were charges which first needed to be verified. Headlines to stories included such innocuous titles as 'Russia Verifying Info on Alleged Rape of 13-Year-Old in Berlin by Migrants', 'Russian Foreign Ministry Hopes for Justice in Alleged Berlin Teen Rape Case', and 'Lavrov Urges Berlin for Information on Alleged Rape of German-Russian Teen'. Where exactly The Independent sees a deliberate conspiracy to "spread false claims" is anyone's guess.

Sputnik's Connections to the Russian Government

Finally, The Independent's slapdash attempt at a coup de grace talks up the supposed mystery behind the Russian news agency's affiliations, claiming that "references to the Sputnik's [sic] links to the Russian government are hard to find on its website." Again, a cursory search of the news agency's website reveals that that simply isn't true.

Last June, responding to another attack against the Russian news agency, also by British media, Sputnik Head of International Broadcasting Anton Anisimov penned an open letter to his UK colleagues, laying out in no uncertain terms Sputnik's broadcasting goals, its owners, budget and even its ancillary funding sources. Literally hundreds more articles on the site, covering everything from official commentaries on the agency's battle against censorship or unwarranted attacks, to things as innocuous as competitions for aspiring photojournalists, make regular mention of Sputnik's mission, its structure and other pertinent information.

© CC BY-SA 2.0 / Heinrich-Böll-Stiftung / George Soros
US' Bill on Info War Against Russia Has Soros' Fingerprints All Over It
Taking into account the changing global media environment, including recent political changes in the United States and in the nations of Europe, it becomes obvious why the leading UK outlets are finding it necessary to smear news sources like Sputnik. Last week, US lawmakers announced that they were preparing to wage an information war against Russia, earmarking $260 million in funding to the so-called Global Engagement Center to counter Russian and other foreign 'propaganda'.

Together with Defense Secretary Fallon's remarks, and similar comments by officials elsewhere in Europe, the UK media's commentary on NATO's statements about Sputnik fit in nicely into the overall narrative, which seems to be: 'Sputnik and RT are terrible, horrible liars, don't listen to them please, listen to us, and allow your governments to spend hundreds of millions in taxpayers' money to counter Russian media.' Will the ruse work? Only time will tell.