To our dear readers and respected colleagues from The Times: our company has never and will never refuse interview requests from international media outlets. Despite some differences in our views on the world and global politics, we believe that only open dialogue will help us achieve better relations and de-escalate tension between our countries.

© Sputnik / Sergey Guneev
Cameron's Claim That Russia is Interested in Brexit 'Groundless', an Attempt to Influence Vote - Putin
The incident with Dominic Kennedy, who is preparing a piece about Sputnik for The Times, is an exception to that rule. Having carefully read his obviously prejudiced questions, we realized that whatever we say, the piece will most likely not be objective. So instead of effectively helping him write his piece, we wrote our own.

During the story of the summer, aka Britain saying ‘cheerio!’ to the EU, Prime Minister David Cameron finally pulled out his trump (no relation to Donald) card to try and get Britons to #votermain: Brexit is a win for Russia in general and Vladimir Putin personally.

After that, it was only a matter of time before our European colleagues would inevitably turn to that timeless backup, the corrosive effect of ‘Kremlin propaganda’ on the bright young minds of European (or, in this case, British) society.

© AP Photo / Alastair Grant
George Galloway: Jesus Could Not Have Made Brits Vote for 'Remain'
Being a young media outlet, we’re incredibly flattered to be credited with so much influence, but we will still have to disappoint you: Sputnik doesn’t care whether Britain leaves the EU, or stays in it. We have provided, and will continue to provide, opinions of both Remain and Leave supporters, and respect any choice the British public makes.

However, reporter Dominic Kennedy from respected British daily The Times decided to swiftly go on the offensive, digging through social media accounts of Sputnik UK staffers and calling into question their qualifications and professionalism. Obviously feeling like this wasn’t quite enough, Mr Kennedy went all in and, citing nameless (but obviously very qualified and professional) observers accused the entire agency of disinformation.

There’s a saying in Russian that roughly translates to ‘a word spoken is past recalling’. Something Mr Kennedy should be well aware of, considering his somewhat recent and very public gaffe on Twitter. 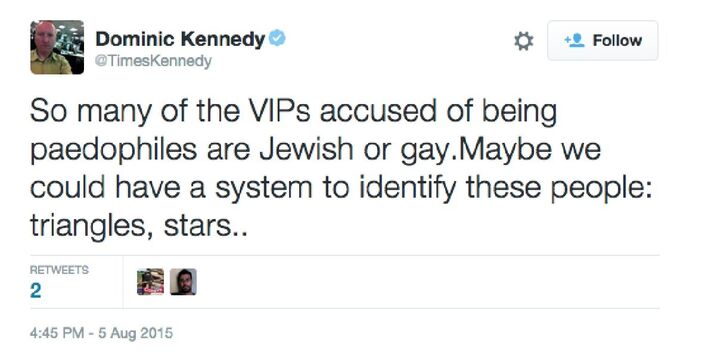 So we were surprised, to say the least, when Mr Kennedy accused our colleagues of lacking professionalism. For example, he emailed our columnist Finian Cunningham and demanded to know why he considers himself an expert on international relations when he received a Master’s degree in Agricultural Chemistry, then went on to enjoy a 20-year long career in journalism, writing for numerous media outlets, including The Mirror, The Irish Times and the Independent.

© Sputnik /
Russia Must Step Up Efforts to Counter Information Attacks - Putin
This information, by the way, is publicly available to anyone who has internet access and knows how to use Google search. Mr Kennedy, however, was probably far too busy running full (and yet woefully incomplete) background checks on our remaining staffers to do so.

Another employee in his sights was Johanna Ross, who works in our Edinburgh office. Mr Kennedy sent her very polite, well-mannered and tactful questions demanding to know how she ended up in journalism when she had at some point in her life worked as a receptionist in a Dundee hotel. The fact that Johanna had since worked extensively in media is clearly irrelevant – as is the fact that journalism is apparently an elitist field where one cannot possibly succeed without a journalism degree.

Sadly, Mr Kennedy doesn’t appear to notice that we live in age of endless possibilities, where people overcome all kinds of barriers to achieve their dreams and goals. He lives in a world where a receptionist could never become a journalist. Just like Icelandic film director Hannes Halldorsson could never become a goalkeeper for his country’s national team and go on to knock the founders of the game right out of the EURO-2016 Champions. Oh, wait….

But the overall tone was actually set by Mr Kennedy’s very first question: “The Times has spoken with observers who claim that Sputnik provides misinformation: fake news, lies, conspiracy theories and untrue stories. What is your response?".

Since Mr Kennedy, however, hadn’t bothered to attribute his sources or even mention specific instances of alleged disinformation and lies, how could we possibly respond? We are always willing to respond to specific complaints, and if we found out that our staffers were negligent in their research or published mistaken information, worry not, we would take these matters very seriously. But until then, Mr Kennedy, we’ll just take a page from your playbook, if you don’t mind.

Sputnik has spoken to obsevers who claim Mr Kennedy is an insensitive and thuggish anti-Semite. What is your response?

© Sputnik /
Which Box Did Your X Go In? Sputnik Finds Out How Britain Voted
To be fair, the investigative editor of The Times did ask us some straightforward questions, to which we are more than happy to provide straightforward answers.

Sputnik News Ltd is a production company that provides radio programmes and online news about UK and European current affairs for the Sputnik News website and radio. Sputnik is part of the Rossiya Segodnya International News Agency.  Rossiya Segodnya’s budget amounts to around 6 billion RUB (approx. 90 million USD). The budget figures above include both expenses for the media in Russian and Sputnik, currently operating in over 30 languages worldwide.

As for the Sputnik International LP, Mr Kennedy, we were not aware such an organization existed.

He goes on to ask why Sputnik has “targeted Scotland” as its UK base, which, let’s be honest, makes us sound less like a media organization and more like a Reaper drone – but does save Mr Kennedy the time it would have taken to explain how he really feels about Sputnik.

© AFP 2019 / ADRIAN DENNIS
SNP to Settle for Deal Short of Full EU Membership - Former Leader
On a more serious note, apart from the office in Edinburgh, Sputnik has a small bureau in London and freelance journalists in other parts of the UK. As for our “attraction” to the SNP – we are open to discussions with any political party and have no preference towards one political force. Any accusation of bias seems very strange to us, because the organizations that frequently accuse us of prejudice are the same ones that refuse our interview requests, over and over.

Mr Kennedy asked us if we were facing a media boycott following a call from Edward Lucas of The Economist to do so. Now, it is possible that Mr Lucas dreams of the day where Britain will follow the lead of Turkey and certain Baltic States where Sputnik has been banned, but judging by our numbers, that isn’t quite working out. However, we do not feel we have the right to advise Mr Lucas on how to spend his free time. Who are we, after all, to stand in the way of one man’s dream?

But by far the best question from The Times’ Dominic Kennedy was this: will we be collecting information and intelligence for the Russian government?

And the answer is: da, comrade! We will continue to collect information and publish it on our websites  — where, oddly enough, any government, be it Russian, British or any other, can read it, along with pretty much anyone with internet access – because we want to provide intelligent alternative points of view on global events. It is, after all, our job.