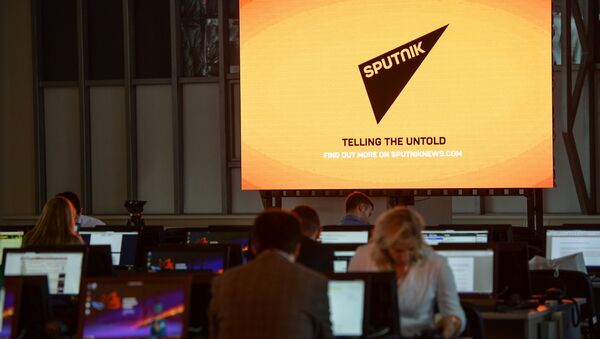 © Sputnik / Alexandr Kryazhev
/
Go to the photo bank
Subscribe
Last week, UK Secretary of Defense Michael Fallon accused Sputnik and RT of "weaponizing misinformation," and said that the outlets need to be "called out" for "misleading or not duly impartial" reporting. Speaking to Sputnik, political scientist Vladimir Olenchenko said that there was a good reason for the UK to be concerned over Russian media.

In a speech devoted to Russia at St. Andrews University in Scotland on Thursday, Secretary Fallon blamed Moscow and President Vladimir Putin personally for turning Russia into an adversary of Western countries, accusing the Kremlin of everything from the use of "cyber weaponry" to "reckless military activity."

On the information front, the secretary said that NATO and Western governments have been forced to "do more to tackle the false reality promoted through Soviet-style misinformation," and emphasized that the West "must counter Putin's Pravda with a faster truth."

Flattering But Fallacious, Fallon: Russia Accused of Creating 'Post-Truth Age'
The minister also blamed Russia for "weaponizing misinformation" and "creat[ing] what we might now see as the post-truth age."

"We need to call out messengers like RT and Sputnik," Fallon said, recalling that "in 2015, Ofcom [the UK Office of Communications] sanctioned RT for broadcasting content 'either materially misleading or not duly impartial' regarding Syria and Ukraine.'" The defense secretary referred to Russian media several more times in his speech, and concluded with the hope that Russia changes its "behavior" and "ditches the misinformation," among other things. Then, he said, there would be "the potential for a better relationship."

Asked to comment on the defense secretary's remarks, Vladimir Olenchenko, a senior fellow at the Moscow-based Institute of World Economy and International Relations' Center for European Studies, told Radio Sputnik that there was good reason the UK, and Western countries in general, to be concerned about the influence of the Russian media.

"Our Western partners have grown accustomed to the idea, pertinent until recently, that they alone could shape the public perception of events, both at home and abroad," Olenchenko said. "At that time, they felt very comfortable, as they were able to present events in the manner that they saw fit, or in a matter that was beneficial to themselves." Therefore, the analyst noted, "when media outlets appeared which began offering objective coverage of events, and Russian media no less, of course this resulted in discontent. That discontent was something that came out publically in the secretary's speech."

UK Defense Secretary Claims Russia Tests NATO by 'Pressuring' Baltic States
"The Russian media's viewpoint, including that of RT and Sputnik, simply does not coincide with their [the Western media's] point of view, and therefore it is classified as 'wrong'," Olenchenko said.

In addition, the analyst noted that there was hint of confusion and uncertainly in Fallon's speech. After all, he said, "if before there was a sense of unison between the US administration and the British government, now, this unison has broken on certain issues. Perhaps Fallon fears that this state of affairs has been violated on [the Russian] issue as well."

Fortunately, Olenchenko suggested that it's unlikely for the UK to actually ban the broadcast of Radio Sputnik or RT outright, since London doesn't have any solid justification for doing so.

"The UK certainly could prohibit the broadcast of Sputnik and RT, but finding an objective justification for such a move is another question. So far, apparently, such a justification hasn't been found, and Britain's elite probably has enough people still capable of talking sense. Therefore, Fallon is trying to find some excuses, if not to ban Russian media altogether, then at least to somehow limit it," Olenchenko concluded.

The defense secretary's talk of the need to engage the Russian media in an 'information war' isn't a new trend. Late last year, the European Parliament voted in favor of a resolution aimed at countering Russian media. The resolution called Sputnik and RT a threat to European unity, and proposed that the EU provide funding for 'counter-propaganda projects.' Most bizarrely, the resolution even attempted to draw parallels between the Russian media's work and the propaganda disseminated by the Daesh (ISIL/ISIS) terrorists. President Putin said that that the document was a sign of the degradation of democracy in Western countries.

000000
Popular comments
It's a problem in the west.. the people don't believe the MSM anymore. So the "elite" blame the messengers for their own failures.