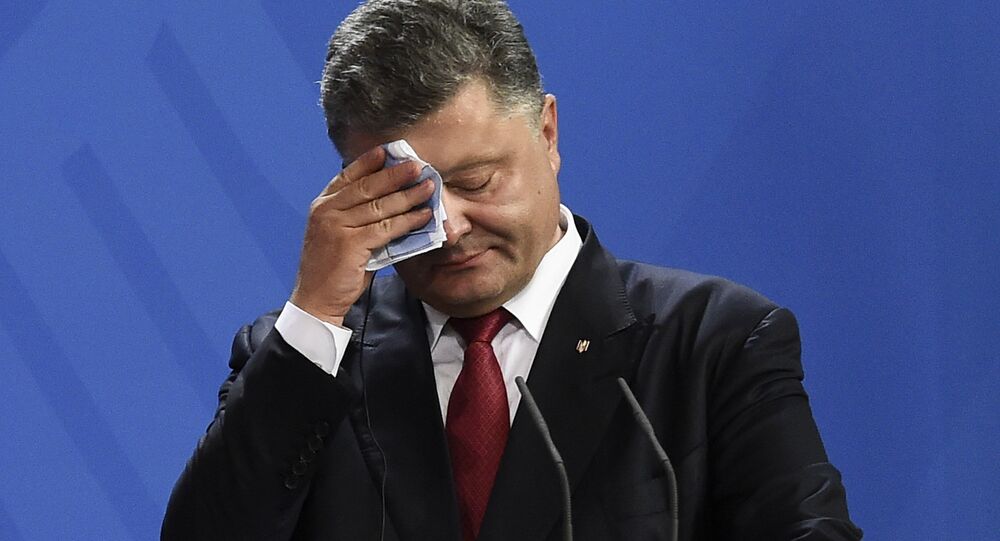 Sensing an impending shift in US policy toward Ukraine following President-elect Trump's inauguration later this month, Ukrainian President Petro Poroshenko is doing his best to try to preserve Kiev's strategic partnership with Washington. The question is whether Trump can forgive Kiev for openly trying to sabotage his election campaign.

On Tuesday, marking the 25th anniversary of the official establishment of US-Ukrainian diplomatic relations, President Poroshenko's press office released a statement which emphasized that Kiev has been and will continue to be a reliable and strategic partner to Washington.

The statement noted that "a real democratic partnership has been laid between the countries, under which the United States continues to offer invaluable practical aid in developing state institutions, civil society, market economy and improving the security of our country."

© AFP 2021 / YURIY DYACHYSHYN
Poroshenko: US Remains Ukraine's Strategic Partner
Poroshenko also thanked his US counterparts for "supporting the sovereignty and territorial integrity of Ukraine in difficult times," and assured Washington that Kiev would continue to "actively develop" the partnership with the US in the political sphere, humanitarian exchanges, and security.

Poroshenko's warm wishes come amid growing fears in Kiev that President-elect Trump may fundamentally alter the US-Ukrainian political relationship that formed after the 2014 Maidan coup d'état, possibly as part of efforts to improve relations with Russia.

The political and military crisis that broke out in Ukraine in late 2013 and culminated in the February 2014 coup led to a severe downturn in relations between Russia and Western countries. Brussels and Washington accused Moscow of 'annexing' Crimea following a referendum on the peninsula in March 2014, and of fomenting unrest in eastern Ukraine's Russian-speaking regions. Russia countered by calling out Western leaders and diplomats for their role in helping to overthrow a democratically-elected Ukrainian government, and the effort to hand pick the new authorities.

Soon after announcing his candidacy in 2015, Donald Trump received criticism from Hillary Clinton and the Democratic Party, and from many of his fellow Republicans, for comments about seeking to normalize relations with Russia, and to work with Moscow on key issues of international security, such as the fight against terrorism.

As the campaign wore on, Trump doubled down on these promises, saying he might recognize Crimea as part of Russia, and admitting that from everything he'd heard, "the people of Crimea would rather be with Russia." Trump later enraged Kiev and its backers in Washington even further by challenging claims about Russia's supposed plans to 'invade Ukraine' – a key assertion made by President Poroshenko in a bid for increased support from NATO and the United States.

© Sputnik / Alexander Mazurkevich
EU 'Lacks Courage to State the Obvious: Maidan Radicals Were Never Democratic'
Finally, Trump has also repeatedly questioned the effectiveness and sensibility of sanctions against Moscow, something Kiev has actively lobbied for both in Brussels and Washington as a key element of its foreign policy.

Observers also couldn't help but notice Trump's cool attitudes toward President Poroshenko personally. In September, Trump made headlines in Ukrainian media when he refused to meet Poroshenko on the sidelines of the UN General Assembly in New York, citing 'scheduling issues'. Two months later, following his election, Trump snubbed Kiev again, this time after his press service forgot to publish the details of a congratulatory phone call with the Ukrainian president, while prominently reporting a similar call with Russian President Vladimir Putin.

Trump's apparently cool attitude toward Poroshenko and the Ukrainian political establishment is somewhat understandable, when one remembers that during the US presidential race, Kiev openly sought to swing the election in Hillary Clinton's favor. Ukrainian officials did so by accusing senior ex-Trump advisor Paul Manafort of corruption during his work as an aide to ousted Ukrainian President Viktor Yanukovych. Officials told British and US media that they would do everything possible to "save the Western world" by preventing Trump "from reaching the summit of American political power."

During the campaign, in addition to the smear campaign against Manafort, and by association, against Trump, Ukrainian politicians did everything they could to convince Americans not to vote for him, accusing him of "challenging" the "very values of the free world," and even insulting him as a "dangerous fringe politician" in need of psychiatric evaluation.

© Sputnik / Evgenia Novozhenina
Ukraine 'Should Brace Itself for the Worst' When Trump Comes to Power
Ultimately, following Trump's unexpected election victory, officials in Kiev are likely asking themselves what will happen if support from Washington dries up and the Western Alliance cools efforts to incorporate Ukraine into Western security and political institutions such as NATO and the EU.

Earlier this week, political observer Boris Mezhuev told Radio Sputnik that Trump will probably look at Ukraine through a "business lens" as a "non-performing asset," with no political or economic benefit for the US to continue supporting Kiev. Stressing that the Trump administration will be less eager to actively prop up the government in Kiev, the analyst concluded that "Washington and Kiev are bound to gradually move away from each other."

But strict cost-benefit analyses aside, maybe the real question officials in Kiev should be asking themselves is: can the President-elect let go of a well-justified grudge against people who repeatedly insulted him and did everything they could to try to prevent him from getting elected? Human emotions and personality play a crucial role in relations between countries and their leaders. Unfortunately for Kiev, Trump's experience with Ukraine's current political elite has been nothing but negative.