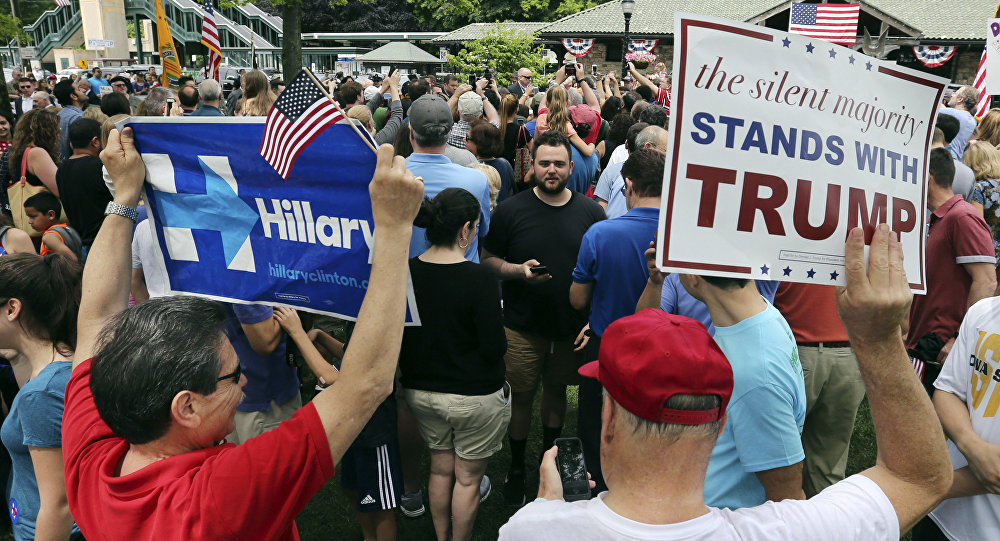 Moscow Accused of Meddling in US Election, Kiev Actually Does It: Here's Proof

Since the DNC email leak last month, Russia has been accused of direct interference in the US election process, with the media launching a tirade against Donald Trump for essentially being a 'Russian agent'. Now, another former Soviet country, Ukraine, has been revealed as openly meddling in the election. The media's response? Silence.

For much of the summer, the Democratic Party and much of the media have accused Russia, the Kremlin, and Vladimir Putin personally of interfering in the American political process, providing little if any credible evidence to back up their claims, but openly implying that that a vote for anyone but Hillary Clinton this fall makes you a Russian agent.

But on Sunday, an unassuming little story in the Financial Times revealed that Ukrainian officials, concerned with the prospects of a Trump presidency, are openly interfering in the US election, and proud of their role.

Kiev's political leadership, the paper reported, is seriously concerned that Donald Trump, "who has praised Ukraine's arch-enemy Vladimir Putin," would abandon them and their pro-Western reform efforts to break Ukraine out of Russia's political orbit. Effectively, FT noted, they have been spurred into doing "something they would never have attempted before: intervene, however indirectly, in a US election."

© REUTERS / Vincent Kessler
'Tired' of Kiev: West May Come Up With Its Own Plan to Solve Ukrainian Crisis
As an example of this 'indirect intervention', FT cited the efforts by Ukraine's parliament, led by Poroshenko Bloc MP Serhiy Leshchenko, to find information which presents the Republican candidate and his team in a negative light.

Earlier this month, Trump campaign manager Paul Manafort was accused of receiving millions of dollars in secret off-the-books payments from former Ukrainian President Viktor Yanukovych during his time as an advisor to the Ukrainian leader in the mid-2000s. Manafort, who has since resigned, has continued to any wrongdoing in the case. In the meantime, the ex-Trump advisor has been dragged through the mud by the Clinton campaign and much of the media.

A theme prevalent throughout the media's coverage of the Manafort scandal was the claim that his ties to Yanukovych were also proof of his ties to the Kremlin, despite Yanukovych's own ambivalent relationship with Moscow and the Russian leadership throughout most of his presidency. Nevertheless, coverage of Manafort inevitably included a collage of photos of Yanukovych's meetings with the Russian president, meant to imply that the Ukrainian leader was, 'Putin's guy in Kiev.'

And who was it that found the mysterious 'secret ledger' which the media then used to bash Manafort and by association, Donald Trump? That would be Serhiy Leshchenko and Ukraine's National Anti-Corruption Bureau, an agency set up after Ukraine's pro-Western coup d'état in 2014 and which receives funding under American and EU aid programs. Conveniently, the Bureau has an evidence-sharing agreement with the FBI.

© AFP 2019 / FAYEZ NURELDINE
If Trump is 'Russia's Candidate', Does That Make Clinton the Saudis' Pick?
Thus, instead of focusing on its own, very real problems with corruption, which have gotten so bad that they have forced even Kiev's erstwhile allies in the West to sit up and taken note, Ukraine's officials told FT that they plan to continue their effort to prevent Trump "from reaching the summit of American political power."

Speaking to the paper, Leshchenko explained bluntly that "a Trump presidency would change the pro-Ukrainian agenda in American foreign policy. For me it was important to show not only the corruption aspect, but that he is [a] pro-Russian candidate who can break the geopolitical balance in the world."

And Ukrainian elites are banking on success. FT suggested that if Trump "loses in November, some observers suggest Kiev's actions may have played at least a small role." Adrian Karatnycky, a senior fellow at the Washington-based Atlantic Council think tank, noted that given Trump's unconventionally friendly attitude toward Moscow, it's "no wonder that some key Ukrainian political figures are getting involved to an unprecedented degree in trying to weaken the Trump bandwagon."

Apart from the mysterious Manafort ledger, Ukrainian officials' verbal efforts against Trump have included everything from warnings that he "challenged the very values of the free world" (attributed to ex-Prime Minister Arseny Yatsenyuk), to outright insults, with Interior Minister Arsen Avakov characterizing the Republican as a "dangerous marginal." Incidentally, both Yatsenyuk and Avakov have been accused of massive graft in their time in office, with Yatsenyuk eventually forced to resign in disgrace with an approval rating within the margin of error. 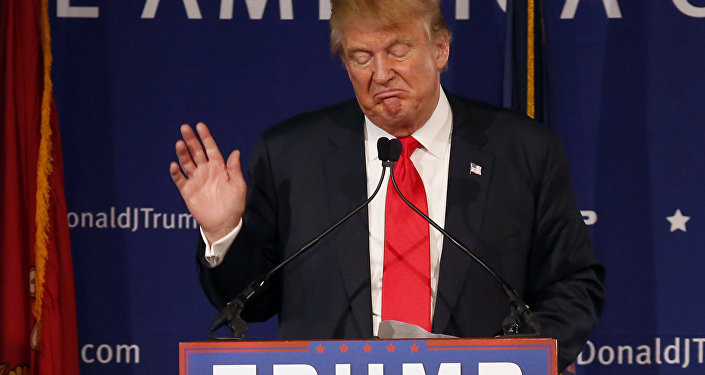 © AP Photo / Mic Smith
Trump Calls for More Humane Policy on Illegal Immigrants, But Even He’s Not Sure
Late last month, Ukrainian officials and the media went nuts after Trump said that Crimeans would rather be with Russia than with Ukraine. In response, Natalie Jaresko, the American-Ukrainian former State Department official who served for a year as Ukraine's finance minister, hurriedly tweeted out an appeal to the New York Times and to hawkish Senator John McCain, asking them to "please assure us you disagree with [Trump's] statement on Crimea/Ukraine."

Ultimately, Ukrainian officials hope to do more than simply make themselves heard. Commenting on the apparent Ukrainian trace behind Manafort's resignation on Twitter, Anton Shekhovtsov, a research associate at Kiev's Institute for Euro-Atlantic Cooperation, excitedly tweeted that "Ukraine's anti-corruption activists have probably saved the Western world."

​And while that may be a bit of an overstatement, saying that Ukraine is openly involved in the American election process is not. In any case, there's nothing new in Kiev's criticisms against the Republican candidate. Over a year ago, long before Trump ever became the Republican nominee, a website affiliated with the Ukrainian Security Service listed Trump as a 'Kremlin agent' and 'enemy of Ukraine' for criticizing Washington's policy toward Kiev, and for seeking to cooperate with Moscow.