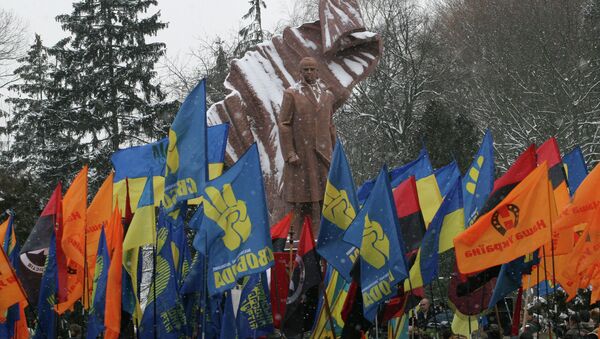 © Sputnik / Alexander Mazurkevich
/
Go to the photo bank
Subscribe
Analyzing the problems in German and European policy toward Kiev, Freitag contributor Lutz Herden says that the main issue is that the EU's leaders still haven't worked up the courage to admit the obvious: post-Maidan Ukraine has not become a democratic state; meanwhile, radicals and nationalists have built up significant political clout.

In his article for the German weekly, Herden suggested that Europe's policy toward its client state in Kiev has put it in an awkward position: Brussels has taken on the role of political sponsor, which has in turn forced them to turn a blind eye to some of the more unpleasant 'features' of Ukrainian politics and the Ukrainian political process.

For example, the journalist recalled, while the events which took place in central Kiev in late 2013 and early 2014 have been categorized as a "democratic revolution" organized against "a corrupt oligarchy around President [Viktor] Yanukovich," it's not customary to discuss the "chauvinistic, sometimes fascist-like savagery" used by the Maidan protestors during the upheaval. This included nationalist protestors' use of imagery of iconic Nazi collaborator Stepan Bandera, at whom politicians, including from Germany, failed to take offense. 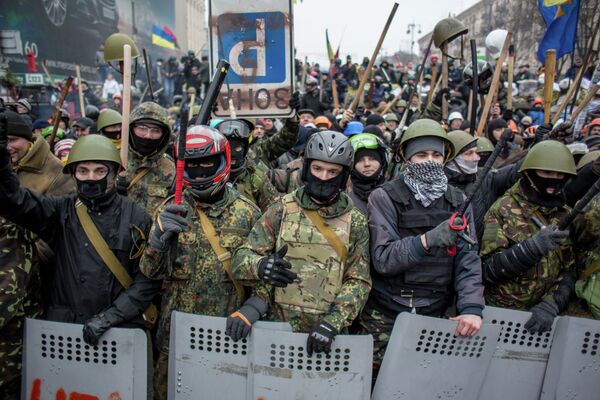 ‘Dark Chapter’: Poland Mulls Demolition of Bandera, UPA Monuments
It was surprising, Herden said, to see European officials simply ignore the "revolutionaries'" use of Bandera as a hero figure, given his fighters' responsibility for the massacre of tens of thousands of Ukrainian Jews and Polish civilians in western Ukraine during the Second World War.

At the same time, the journalist noted, the nonchalance with which European leaders accepted the change of power in Kiev leads to questions about their actual commitment to democratic ideals. After all, he recalled, President Yanukovych had been elected, under EU observance, in elections in 2010 that have been described as free and fair. 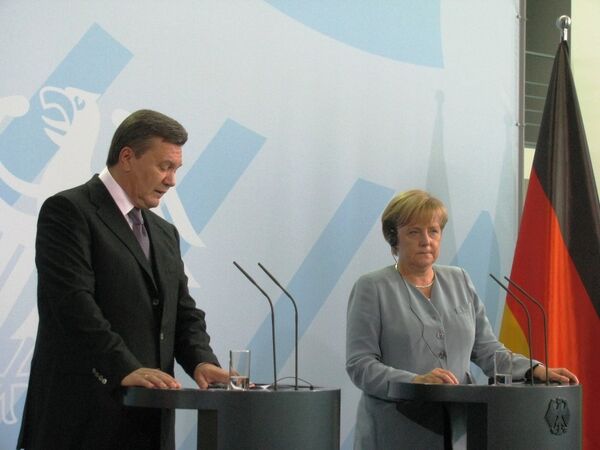 Furthermore, Herden suggested that throughout the Ukrainian crisis that began in 2014 following Maidan, European officials demonstrated a poor knowledge of history, including the fragile nature of Ukraine's statehood, and the country's fundamentally binational character.

Ukrainian Officials' Cruel Words About Tu-154 'Sign That Kiev Has Lost Its Mind'
For instance, he noted, the loud international scandal surrounding Crimea, whose return to Russia in March 2014 soured relations between the West and Moscow, had historical roots going back decades. The journalist recalled that the March 2014 referendum was not the peninsula's first, and that in 1994 too, Crimea's inhabitants voted to secede from Ukraine, with a 78.1% majority voting in favor.

Before that, in 1992, the peninsula's regional parliament – the Supreme Council, declared independence with the intention of rejoining Russia, but was shot down by Kiev and by then-Russian President Boris Yeltsin. Nor is it impossible to forget that Soviet leader Nikita Khrushchev signed Crimea away to the Ukrainian Soviet Republic in 1954, without parliamentary approval or popular plebiscite, Herden wrote. 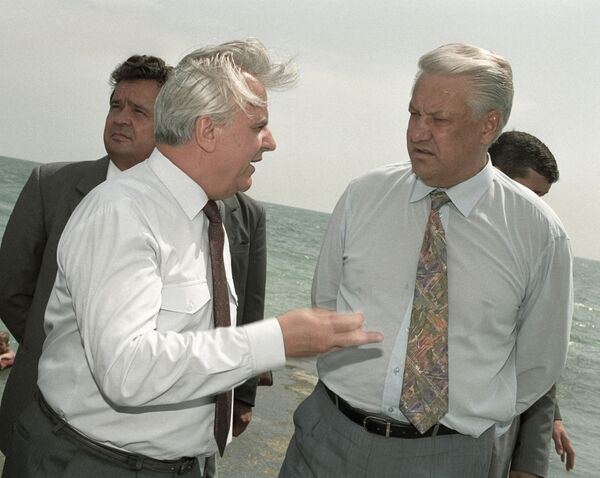 Ukrainian Army Carrying Out Massed Attacks Against Donbass Militia Positions
As for the gruesome civil war which broke out in eastern Ukraine in the spring of 2014, there too, the journalist said, the history of the early Soviet Union, and Soviet leaders' transfer traditionally Russian-populated regions to the Ukrainian Republic in the early 1920s cannot simply be written off. After all, he noted, the fledgling self-proclaimed Donetsk and Lugansk People's Republics had their historical roots in projects such as the Donetsk-Krivoy Rog Soviet Republic of 1918.

Following the victory of the Maidan coup in February 2014, Herden recalled, the new authorities "made no secret of their nationalist Ukrainian orientation," and promised to abolish Russian as an official language. Authorities were emboldened by their Western patrons' failure to appreciate the Russian factor in modern Ukraine, thus "accelerating [the country's] disintegration." 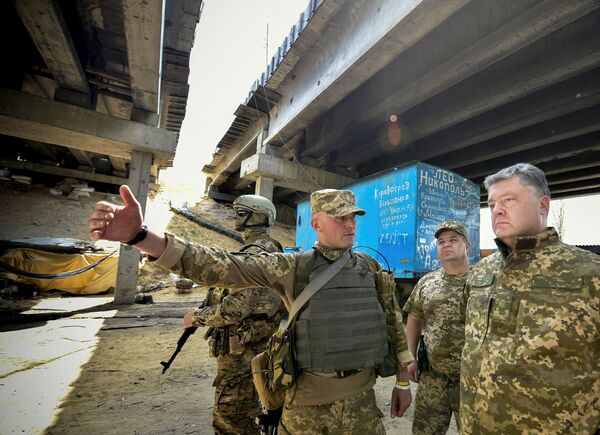 Ultimately, Herden stressed, European politicians' ignorance and disregard for the facts surrounding the Ukrainian crisis has become somewhat of a 'distinctive attribute' of contemporary European politics: the superficial alliance that has formed between Brussels and Kiev has forced Europe to turn a deaf ear to the kinds of xenophobic and undemocratic rhetoric and behavior emanating from Ukraine's politicians.

Going Out With a Bang: Here's Why Kiev Keeps Provoking Russia in Crimea
"Courage [to seek] the truth is the elixir of realpolitik," the journalist noted. And part of that courage must be to admit past mistakes and to fight against untruths, he added.

Earlier this month, Ukrainian and European officials moved forward to amend the EU-Ukraine Association Agreement with an additional declaration, aimed to satisfy objections made by the Netherlands about Ukraine's prospects for membership in the supranational bloc. The addendum states that Association will not essentially lead to Ukraine's membership in the bloc, nor oblige EU members to provide financial or security assistance to Kiev. Amsterdam has promised to clarify the fate of the amended Association Agreement by early next year.

000000
Popular comments
unfortunately the EU simpy is a collective of obedient vassals serving some figueres located in the USA. By doing this, they have betrayed the interests of the european people and european businesses.

md74
29 December 2016, 14:23 GMT1
000000
Courage? E.U NATO did the COUP. First they brought a deal to YANU that signed it. Then when all security was removed, they stormed the parliament. They did it to RAILROAD UKRAINE into ER.U and NATO. Nothing else. U.S immediately recon the new government. While it was illegal and still is.
cast235
29 December 2016, 16:30 GMT
000000
Newsfeed
0
New firstOld first
loader
LIVE
Заголовок открываемого материала
Access to the chat has been blocked for violating the rules . You will be able to participate again through:∞. If you do not agree with the blocking, please use the feedback form
The discussion is closed. You can participate in the discussion within 24 hours after the publication of the article.
To participate in the discussion
log in or register
loader
Chats
Заголовок открываемого материала
Worldwide
InternationalEnglishEnglishMundoEspañolSpanish
Europe
DeutschlandDeutschGermanFranceFrançaisFrenchΕλλάδαΕλληνικάGreekItaliaItalianoItalianČeská republikaČeštinaCzechPolskaPolskiPolishСрбиjаСрпскиSerbianLatvijaLatviešuLatvianLietuvaLietuviųLithuanianMoldovaMoldoveneascăMoldavianБеларусьБеларускiBelarusian
Transcaucasia
ԱրմենիաՀայերենArmenianАҧсныАҧсышәалаAbkhazХуссар ИрыстонИронауОssetianსაქართველოქართულიGeorgianAzərbaycanАzərbaycancaAzerbaijani
Middle East
Sputnik عربيArabicArabicTürkiyeTürkçeTurkishSputnik ایرانPersianPersianSputnik افغانستانDariDari
Central Asia
ҚазақстанҚазақ тіліKazakhКыргызстанКыргызчаKyrgyzOʻzbekistonЎзбекчаUzbekТоҷикистонТоҷикӣTajik
East & Southeast Asia
Việt NamTiếng ViệtVietnamese日本日本語Japanese俄罗斯卫星通讯社中文（简体）Chinese (simplified)俄罗斯卫星通讯社中文（繁体）Chinese (traditional)
South America
BrasilPortuguêsPortuguese
NewsfeedBreaking
16:41 GMTUnexpected Reason Why Manchester United Talisman Cristiano Ronaldo Swapped Mansions in England
16:39 GMTPiers Morgan to Headline News UK's Copycat Rival to RT and GB News Next Year
16:30 GMTBread and Circuses! Adorable Quokka Enjoys Juggling Show
16:24 GMTSeveral Rockets Reportedly Hit Kabul, Could Strike Power Plant
16:09 GMTTrump Says Americans Won’t ‘Have a Country Left in Three Years’
15:46 GMTIraqi Asylum Seeker Jailed After UK CCTV Operator Spots Him Raping Unconscious Woman on Seafront
15:36 GMTPentagon Contract Seeks Alternate GPS Using Low Earth Orbit Satellites
15:27 GMTRuckus Over AUKUS
15:26 GMTUS Regulator Approves Creation of Nuclear Dump in Texas Despite Opposition From Local Authorities
15:23 GMTRussian Gov't Allocates $60Mln to Produce Soyuz Spacecraft for Tourist Flights
15:17 GMTSyrian Kurdish Leader Discussed Turkish Attacks During Moscow Visit, SDC Says
15:07 GMTEU Commission Chief Announces Launch of Competitor to China’s Belt and Road
14:51 GMTEU Not Informed About New US, UK & Australia Alliance, Plans ‘to Assess Implications’
14:48 GMT'BJP's Politics Behind 96% Jump in Communal Riots in India', Says Opposition Congress
14:46 GMT‘No Friend of China’: As Raab Exits Stage Left, What Will UK Foreign Policy Look Like Under Truss?
14:34 GMTSouth African Child Maintenance Payments Delayed by Ransomware Attack
14:34 GMTEuropean Gas Futures Fall Below $750 Per 1,000 Cubic Meters
14:29 GMTIs the Age of the Car Over as Politicians Around Europe Declare War on the Motorist?
14:29 GMTMessage for India? AUKUS Announcement Sparks Debate About Relevance of Quad, Reliability of US
14:15 GMTBlack Market Business for Foreign Visas Skyrockets in Afghanistan, Reports Say