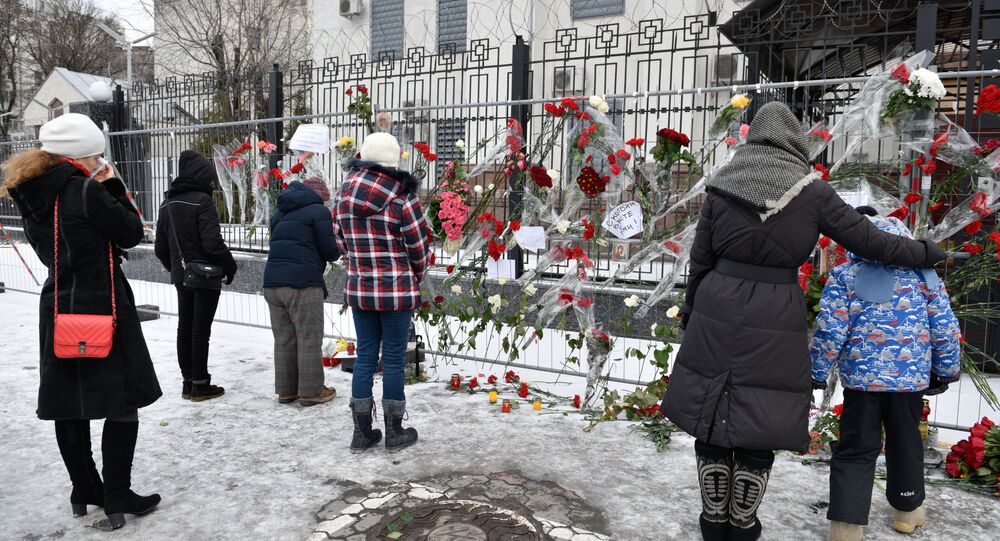 Russia has received a wave of sympathy from people around the world over the Sunday crash of a Syria-bound Tu-154 with 92 people onboard. Many ordinary Ukrainians have joined in, leaving flowers at the Russian Embassy in Kiev and at consulates in other cities, and offering support online. Attitudes of the country's elite are another story, however.

© Sputnik / Mikhail Voskresenskiy
World Weeps With Russia During National Day of Mourning for Tu-154 Victims
Russia has received a flood of condolences from ordinary people and political leaders worldwide, even from countries that have had rocky relations with Moscow in recent years.

In Ukraine, the reaction of ordinary people was much the same; residents of the capital brought flowers to the Russian Embassy, and left notes reading 'Russia! We mourn together with you' and 'Condolences to relatives from Kievites', among others.

Photo: Ukrainians bring flowers to the Russian Embassy in Kiev after the crash of Tu-154 https://t.co/MPWvBvRKt3 pic.twitter.com/G7sS84nJJa

In the halls of power, however, attitudes seem different. President Petro Poroshenko, an avid Twitter user, has made no mention of the crash, either publically or on his Twitter page. Other Ukrainian authorities have been similarly silent, or worse, have resorted to making offensive comments about the dead.

© Sputnik / Vladimir Astapkovich
Former USSR Unites in Mourning Tu-154 Crash Victims, With One Exception
Ukrainian PACE representative Borislav Bereza, for instance, explained that he was "not upset" over the plane crash, claiming that the Tu-154's passengers were "flying to go entertain" Russian military servicemen in Syria "who before that may have killed Ukrainians in Donbass."

Dnepr Mayor Boris Filatov went further, posting on Facebook that "instead of celebrating the 'liberation' of Aleppo," the Russian musicians onboard "will now be forced to give concerts to demons in hell."

The only semi-official reaction that Russia got at the federal level was from Poroshenko adviser Yuri Biryukov, who rejoiced over the plane crash and made crude jokes in a Facebook post.

"I had only one desire: to bring bottles of Boyaryshnik to the Embassy," Biryukov wrote, referring to the recent mass poisonings in the Siberian city of Irkutsk. Referring to Ukraine's eastern neighbor as a "horde," the official wrote that this "horde genuinely does not seem to understand why we rejoice in the deaths of 80 soldiers of its army."

© Photo : YouTube/DjukiNew1957
Why China Joins Russia in Mourning Loss of Members of the Alexandrov Ensemble
Biryukov's comment prompted a response from Russian Foreign Ministry spokeswoman Maria Zakharova, who countered by saying that Moscow understands "perfectly well [why] officials in Kiev are so glad" about the plane crash: "People backed by nationalists and radicals have come to power in Ukraine."

Deputy Prime Minister Dmitry Rogozin went further, calling Biryukov a "moral degenerate," and adding that Biryukov's soul must have been poisoned by a 'Boyaryshnik of Russophobia'.

Not everyone agreed with the Ukrainian politicians' commentaries. One user reminded Biryukov that Dr. Liza, who perished in Sunday's crash, had opened the first hospice at a Kiev cancer hospital in 1999. "What good has Biryukov done for Ukraine?" he asked. Another condemned the official for 'dancing on the bones of others', adding that Biryukov has "neither common sense nor any sense of Christian morality."

© Sputnik / Nina Zotina
Tu-154 Plane Crash: Sochi Locals Take It as 'Their Own Tragedy'
People also criticized Bereza's post, one user asking him how Europe would react if they realized that the official Ukrainian PACE representative had made such outrageous comments. "You spoke out in a very short-sighted manner," the user wrote.

Speaking to Radio Sputnik about the Ukrainian officials' comments, political scientist Alexei Gusev said that it was "very important" that the vast majority of leaders around the world had reacted to the plane crash with gestures of sympathy toward the victims and toward Russia.

As far as comments like Biryukov's are concerned, Gusev said that even "commenting on these kinds of statements is difficult. Here we must understand that the people who came to power following the coup d'état are in fact just bandits. Here we have the words not just of some petty official, but of a presidential adviser. Just think about it – what kind of advice could he possibly give to the Ukrainian president, if he makes such remarks on social media..."

Effectively, Gusev suggested, "the authorities that are now at the helm of the Ukrainian state seem to have gone mad. This is already a diagnosis of insanity."

Ultimately, Gusev stressed that it is important to separate the rhetoric of authorities in Kiev from the attitudes of ordinary Ukrainians. "The people reacted to this tragedy in a completely different manner," the analyst recalled. "People are coming to the Russian consulate in Odessa, to the embassy in Kiev, to lay flowers. One cannot identify the Ukrainian people alongside the so-called 'Kiev authorities'."

The latter, in the analyst's words, are not representative of the Ukrainian people, but "a group of degenerates who will use any occasion to promote themselves. But I think that ultimately life will put everything in its place," Guzev concluded.