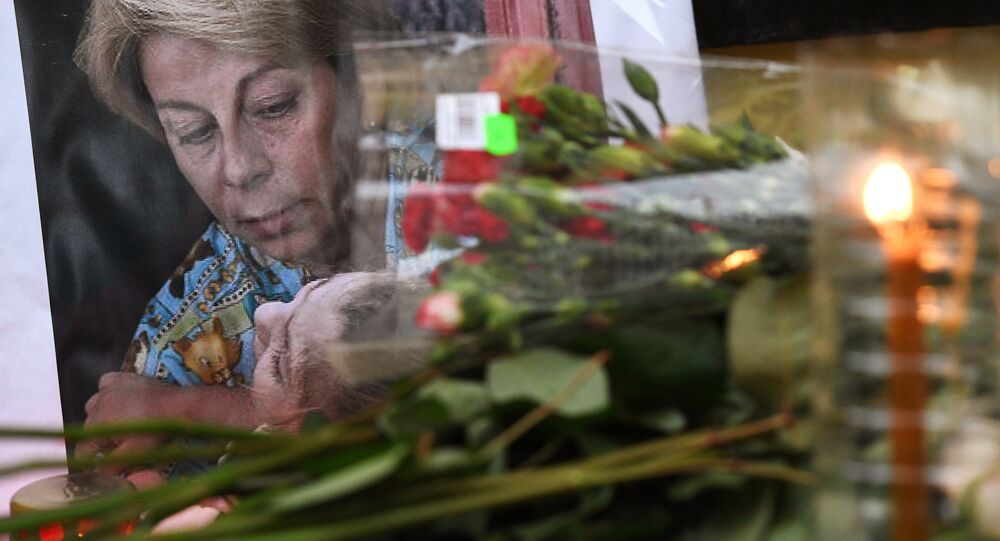 The Medecins Sans Frontieres (Doctors Without Borders, or MSF) offered their sincere condolences to the relatives, the friends and the colleagues of Dr Glinka who was a figurehead of Russian humanitarian medical action, according to MSF Representative in Russia.

© Sputnik / Kirill Kallinikov
'She Was a Miracle, Envoy of Kindness': Russian Charity Activist Dr. Lisa Among Passengers of Tu-154 Crash in Black Sea
MOSCOW (Sputnik) — The Medecins Sans Frontieres (Doctors Without Borders, or MSF) is expressing condolences to the relatives and colleagues of renowned Russian humanitarian and charity activist Elizaveta Glinka, widely known as Dr. Liza, who died in a plane crash in the Black Sea, MSF Representative in Russia told Sputnik on Monday.

The Russian Defense Ministry's Tu-154 aircraft en route to Syria from Moscow crashed soon after takeoff near Russia's Black Sea resort of Sochi early Sunday. The plane was carrying 92 people including eight crew members, 64 musicians of the Alexandrov Ensemble, the official choir of the Russian army, nine reporters, Glinka, and two federal civil servants. All the passengers and crew members are feared dead.

"MSF offer their sincere condolences to the relatives, the friends and the colleagues of Dr Glinka who was a figurehead of Russian humanitarian medical action", Stephane Prevost, MSF Representative in Russia, said.

© Sputnik / Vladimir Vyatkin
'It Takes Years to Create Such Ensemble': Artiste Shares Memories About Vocalist Feared Dead in Tu-154 Crash
Glinka was going to Hmeymim airbase to deliver medical supplies to a university hospital in Syria's Latakia province. She considered helping people in war zones, in Donbas and Syria in the recent years, to be the mission of her life.

Glinka was awarded many times for her charity work. Among her most important awards are the State Award of the Russian Federation for outstanding achievements in the sphere of human rights activities received on December 8, 2016, the Decoration "For Beneficence" in 2015 and the Order of Friendship in 2012.

Monday is a national day of mourning of the Tu-154 crash victims in Russia.