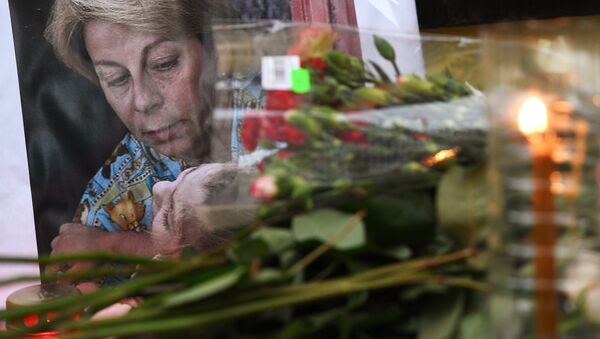 © Sputnik / Mikhail Voskresenskiy
/
Go to the mediabank
Subscribe
International
India
Africa
As Russian flags fly at half-mast to mark the tragic loss of life in yesterday's Ministry of Defense plane crash in the Black Sea, the rest of the world joins in mourning the 92 passengers who died.

Embassies around the world opened books of condolence, as Russia is observing December 26 as a national day of mourning.

​​In London, a makeshift memorial was set up outside Russia's embassy there, with people laying flowers in sympathy with the families of the victims.

​The same happened in Ukraine, where flowers, cards and toys were placed in memory, and many more people took to social media to express their condolences.

Mourners laid flowers at the embassy in Latvia despite cold winter temperatures.​

​Germany's Foreign Office expressed shock and sympathy in a tweet.

Canada and Russia were due to face off in a World Youth Hockey Championship match. The two teams observed a minute of silence for the victims before beginning play.

In Estonia, mourners laid bouquets at the stone foundation of Russia's embassy.

And Russia's embassy in Denmark tweeted a photo of its flag and contributions from mourners.

Many candles have also been lit around Russia's embassy in Prague and around Europe.

​Mourners in Washington, DC, have been laying flowers at Russia's embassy there since news of the crash broke. The consulate in San Francisco has also received tributes.

​Medecins Sans Frontieres (MSF, or Doctors Without Borders) has offered condolences to the relatives and colleagues of Russian humanitarian and charity activist Elizaveta Glinka, widely known as Dr. Liza, who was also on the plane that crashed.

"MSF offer their sincere condolences to the relatives, the friends and the colleagues of Dr Glinka who was a figurehead of Russian humanitarian medical action," Stephane Prevost, MSF Representative in Russia, said.

In Russia itself, all cultural and entertainment activities dedicated to upcoming New Year festivities are cancelled, including on national television channels. Memorials have been erected around Russia at sites significant to the army personnel, journalists and aid workers who perished on the flight.The Tu-154 aircraft en route to Syria from Moscow crashed soon after takeoff near the Black Sea resort of Sochi early Sunday.

The plane was carrying 92 people including eight crew members, 64 musicians from the Alexandrov Ensemble, nine reporters, the head of Spravedlivaya Pomoshch (Fair Aid) charity Elizaveta Glinka and two federal civil servants. All onboard are believed to have died.