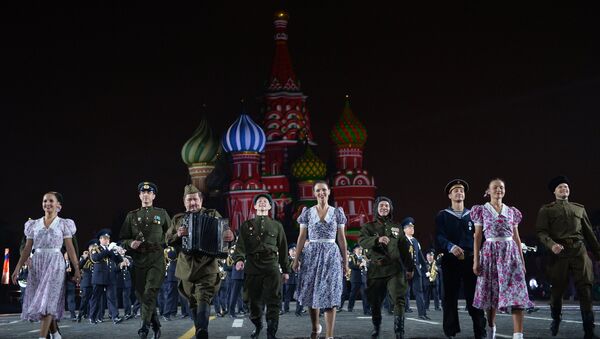 © Sputnik / Vladimir Astapkovich
/
Go to the mediabank
Subscribe
International
India
Africa
The crash of a Russian Tu-154 on route to Syria with dozens of musicians, journalists and a famous charity doctor onboard has resulted in a wave of condolences from leaders and ordinary people from around the world. Messages of sympathy have been particularly numerous in the ex-Soviet Union, where appreciation for the Alexandrov Ensemble is strong.

Washington Residents Laying Flowers at Russian Embassy
Russia is continuing its search for the wreckage of the Russian military plane off the coast of the Black Sea, where it crashed in the early hours of Sunday morning shortly after refueling outside Sochi. The aircraft, enroute to Syria from Moscow, was carrying 92 people, including 64 musicians of the renowned Alexandrov Ensemble, nine journalists, head of the Fair Aid medical charity Elizaveta Glinka, eight crew and two civil servants. All the passengers and crew are feared dead.

The tragedy has led to a flood of messages of sympathy from around the world, with ordinary people worldwide bringing flowers to Russian embassies and consulates, as world leaders offered messages of condolences to the victims' families, to Russians and the Russian government.

Somewhat unexpectedly, the tragedy even brought together nations which have had rocky relations with Moscow in recent years. Polish President Andrzej Duda sent a message to President Putin, conveying his condolences "on behalf of the Polish people" "to the Russian people, primarily the families of the victims." Other officials, from the European Union to the United States, also sent formal and informal messages of support to Moscow.

But it was the countries of the former Soviet Union that offered the strongest messages of support. Belarusian President Alexander Lukashenko joined President Putin in declaring Monday a national day of mourning in honor of the plane's passengers and crew. Flags on government buildings were lowered to half-mast, and light entertainment on state radio and television channels was canceled out of respect for the victims.

Asia
Why China Joins Russia in Mourning Loss of Members of the Alexandrov Ensemble
Elsewhere in the former USSR, similar messages of support could be heard. Speaking to the Russian President at a meeting of the Eurasian Economic Commission in St. Petersburg on Monday, Kazakhstan President Nursultan Nazarbayev said that "we, all the leaders of the countries [of the EEU] express our sincere condolences to the [Russian] people and to all the family members of those who perished."

Other leaders from almost every other republic of the former Soviet Union also offered condolences, including Armenian President Serzh Sargsyan, Moldovan President Igor Dodon, Azerbaijani President Ilham Aliyev, Uzbekistan President Shavkat Mirziyoyev, and Tajikistan President Emomali Rahmon. Latvian Foreign Minister Edgars Rinkevics tweeted his well-wishes to the families and friends of the victims of the crash. The Estonian Foreign Ministry did the same. Ukraine became the only major exception, with President Poroshenko staying silent, while presidential advisor Yuri Biryukov made crude and tasteless jokes about the crash.

In addition to the diplomatic solidarity given to their partners in Moscow at the official level, unofficially, much of the sympathy flowing in Russia's direction from ordinary people in the former Soviet republics comes down to the Alexandrov Ensemble, 64 members of which are feared dead following Sunday's crash. For many in the former USSR, the military choir's repertoire, which includes many stirring songs about the Great Patriotic War, is not seen as something foreign, but as a part of local identity and a shared history with Russia.