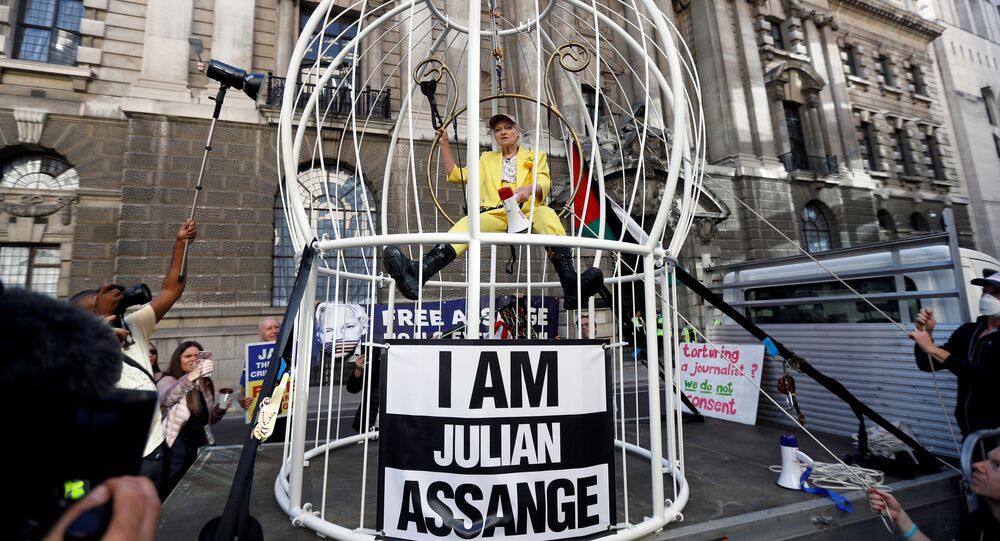 Julian Assange's substantive extradition hearings are expected to recommence at the Central Criminal Court of England on 7 September, where witnesses for both the prosecution and the defence are due to testify at this hotly contested legal challenge.

British artist and fashion designer Vivienne Westwood denounced the treatment of imprisoned journalist and publisher Julian Assange, whilst dressed in a yellow suit and inside a large metal cage, outside the Old Bailey criminal court in central London, on the morning of 21 July 2020.

"I am Julian Assange, I am the canary in the cage. If I die down the coal mine from poisonous gas that's the signal for all the miners to leave", Ms Westwood said while sitting on a metal perch inside the cage. "But I am half poisoned already from government corruption of law and gaming of the legal system", she said via a megaphone.

"I am still whistling away but seven billion people don't know what the f*ck is going on in this world. Julian Assange is a publisher. In 2006, he began WikiLeaks, a safe haven for whistleblowers. At the same time the net to catch him was cast back then. Since then, WikiLeaks has published, released, thousands upon thousands of secret documents in the public interested exposing government corruption worldwide. And all kinds of corruption worldwide", she said.

​Ms Westwood has repeatedly spoken out in defence of Mr Assange and against his potential extradition to the United States to face charges under the 1917 Espionage Act. She chose the Old Bailey as the location for this piece of political performance art because the second part of Mr Assange's extradition hearings, which are scheduled to begin on 7 September, are expected to be heard at the Old Bailey.

The installation was designed to conjure up the image of a caged canary, which Ms Westwood said Mr Assange represented, owing to the fact that his prosecution would portend a fatal blow to journalistic freedoms both in Britain and the US.

It was commonplace in the 20th century for miners in Britain to take caged canaries in the mines with them as they worked because of the small black and yellow bird's sensitivity to toxic gases. If gases, such as carbon monoxide, were released, the canary (which is more sensitive than humans to such fumes) would die and thereby alert the miners to impending danger. Hence the expression "a canary in the coal mine".

After the event, supporters of Mr Assange chanted "free Julian Assange, jail the war criminals". US Secretary of State Mike Pompeo is due to visit Number 10 Downing street later in the day and protesters intend on calling him out for the role he has played in the attempted extradition of Mr Assange. Mr Pompeo labelled WikiLeaks a "non-state hostile intelligence service" when he was CIA director during a speech in 2017 in which he made it clear that Mr Assange would be among the agency's priorities.

The International Bar Association's Human Rights Institute has "condemned" the pre-trial "mistreatment" of Mr Assange and the Council of Europe's parliamentary arm and its human rights commissioner have both explicitly called for his extradition to be blocked.