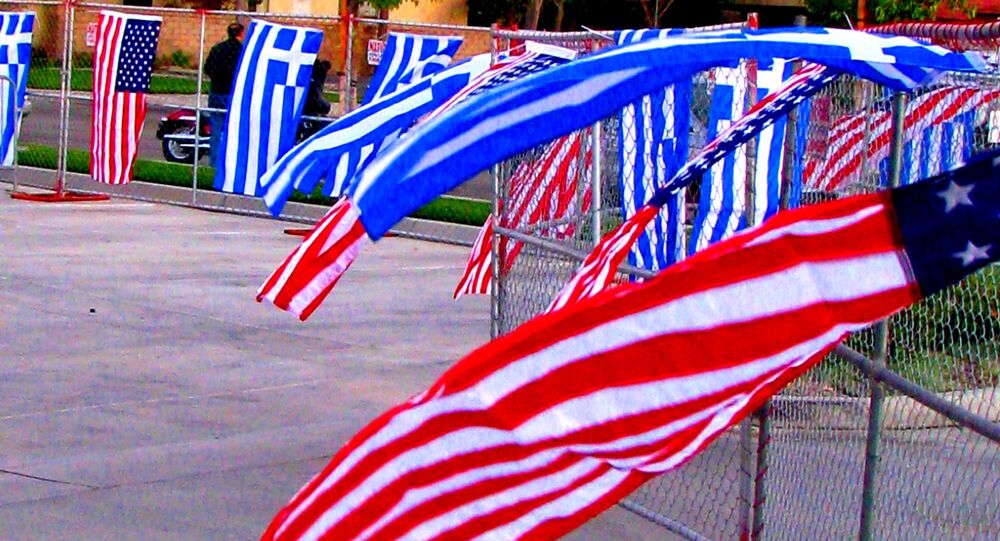 A Marriage Blessed by the Gods? Tsipras, Trump to Discuss Defense, Economy

Greek leader Alexis Tsipras is to meet with Donald Trump October 17, to discuss a number of major economic and geopolitical issues. In many areas, the pair's needs and objectives align closely.

Greek Prime Minister Alexis Tsipras is expected to outline the role he wants Greece to play in the Eastern Mediterranean, and discuss the International Monetary Fund's (IMF) continuing involvement in his country, when he meets in Washington with US President Donald Trump October 17.

AHI sends letter to Trump before his meeting with Tsipras https://t.co/r8x5auimrN #GO 🇬🇷

​The agenda of their meeting includes military issues, such as the upgrading of the Greek fleet of F-16 military jets, Greece's effort to become a regional energy hub, and the IMF's third review of the country's third bailout.

In respect of the jet upgrade, Greece is seeking to upgrade its existing F-16 jets and purchase fifth-generation F-35 fighters from the US, and also arrange maintenance of the military's S300 long-range surface-to-air missile systems. If the F-16s are upgraded to F-16 Viper variant, they will be compatible with the F-35s, should Greece proceed with their purchase. The improvement would also significantly prolong the life of the F-16s.

On July 20, the IMF approved, in principle, a US$1.8 billion precautionary Stand-By Arrangement for Greece. It will become effective only after the Fund receives specific and credible assurances from Greece's European partners to ensure debt sustainability, and provided Greece's economic program remains on track.

At the Hellenic Museum of Chicago an important monument to our culture and history where the Greek community's heart beats. 1/2 pic.twitter.com/IgZXIH1gZo

We leave behind the crisis and the economic and political model that led to it and we lay the foundations for a new model of growth. 2/2 pic.twitter.com/CRtkaNoMeU

​The meeting between Tsipras and Trump follows an October 14 summit with Greek American businessmen in Chicago, at which Tsipras said the Greek "comeback is upon us," and reiterated his government's commitment to luring foreign investors. He added changes have been made to the country's legal framework, making it easier to invest.

Visit at the Cinespace Studios in Chicago and meeting with its President Alex Pissios. pic.twitter.com/AH2fiHBy61

The Greek premier's visit comes at a time that a number of major geopolitical issues arguably make optimal relations between the US and Greece an attractive objective for both sides.

For one, relations between Washington and Ankara have reached a historic low-point due to Ankara's pivot towards Russia and China.

The fracture allows Greece the opportunity to present itself as a reliable regional partner in Turkey's place, should Athens choose to take it. Athens is also engaged in long-standing feud of its own with Ankara, which has endured ever since Greece split from the Ottoman Empire in the 1800s.

The Greek Supreme Court's refusal to extradite eight Turkish servicemen to Turkey to stand trial for their alleged role in the failed coup attempt in July 2016 has further exacerbated tensions — despite both countries joining NATO in 1951, their dispute has only been prolonged, rather than resolved.

Similarly, despite the country's ongoing financial woes, Greece is one of the few NATO member-countries that consistently meets the bloc's two percent of GDP defense spending target, and as such is a perfect case study to support Trump's continuing push for bloc members to "pay their way."

Moreover, US interest in the region has historically been driven by competition with Russia, dating back to the aftermath of World War II. Then, a protracted civil war was raging between Greece's Western-backed monarchy and partisans who had been originally organized to fight Nazi Germany's occupation.

Despite receiving no support from the Soviet Union, British and American leaders feared Greece falling out of their sphere of influence — in 1947 then-President Harry Truman dispatched US$300 million in military an economic aid to Greece, and dispatched a vast number of troops to the country to suppress the partisan uprising, creation a situation critics referred to as "murder inc. in the Mediterranean."

​The support was offered under the auspices of the newly-minted Truman Doctrine, a policy ostensibly designed to stem the spread of Communism, which served to suppress independent nationalism in newly-liberated countries.

The Truman Doctrine, where Truman asks for U.S. support in Turkey and Greece to stop the spread of communism. pic.twitter.com/LQBx4v2R65

US aid helped the Greek government survive, and by 1949 it had won the civil war. In 1953, the first defense cooperation agreement between Greece and the US was signed, providing for the establishment and operation of American military installations on Greek territory.

The current "mutual defense cooperation agreement" between the pair provides continued US military support to Greece, and a major US military facility at Souda Bay, Crete.

US, Greece Have ‘Unwavering’ Relationship Through NATO Alliance - Obama

US Without Plans to Provide Financial Aid to Greece - White House