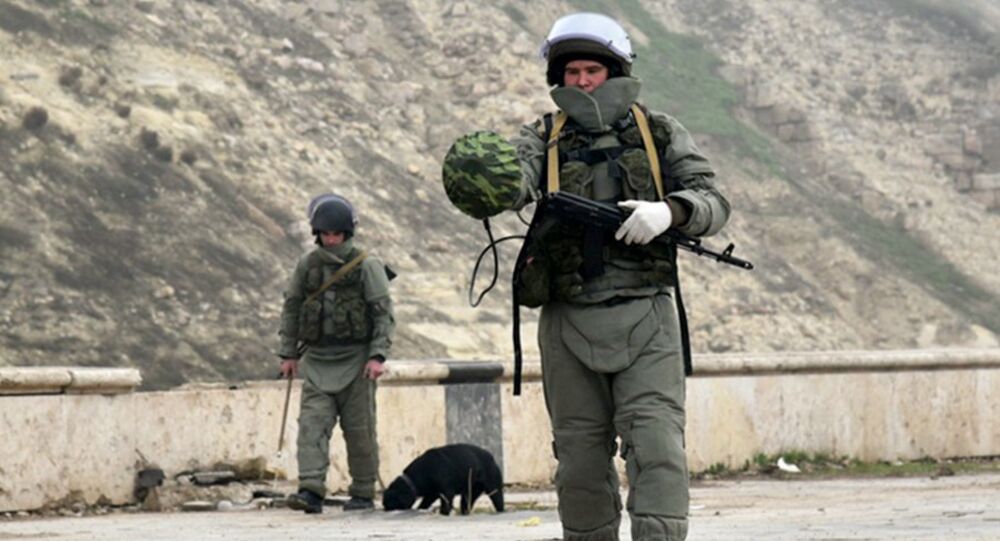 Combat engineers from the International Anti-Mine Center of the Russian Armed Forces have managed to defuse more than 120 explosive devices in the Syrian city of Palmyra within the first five hours of work, commander of the unit Colonel Valery Ovdiyenko told Sputnik.

Bomb squads from the Russian Armed Forces' International Anti-Mine Center continue demining operations in the ancient city of Palmyra, Syria, which has recently been liberated from Daesh terrorists, according to commander of the unit Colonel Valery Ovdiyenko.

"Works are organized on the outskirts of the city and in its historical part. During the first five to six hours of the demining process, more than 120 explosive devices were defused by the personnel," he said in an interview with Sputnik.

He said that the sappers use Korshun (Kite) mine detectors in their as well as mine detection dogs, which help them track down the explosives. He added that the combat engineers are due to check out about 900 hectares of territory in Palmyra within a month and a half.

© REUTERS / Russian Ministry of Defence
Mission Accomplished: Russian Deminers Defuse 19,000 Explosives in Palmyra
Ovdiyenko drew specific attention to the fact that the mined objects in Palmyra include a whole array of historic sites.

Earlier this week, the Russian Defense Ministry said that more than 150 Russian engineers and 17 pieces of equipment have been deployed to Syria for mine clearance operations in Palmyra.

🇸🇾🇷🇺 Over 150 Russian engineers have been deployed to Syria to assist with demining the ancient city of Palmyra today (16/03/2017) pic.twitter.com/vXZoc4qdEg

© Photo : Ruptly TV
Enter the Machine: Russia Deploys Robots to Demine Palmyra
Russian President Vladimir Putin commented on the December Daesh offensive on Palmyra. According to the Russian leader, the situation in Palmyra was a result of discordant actions of different players in Syria.