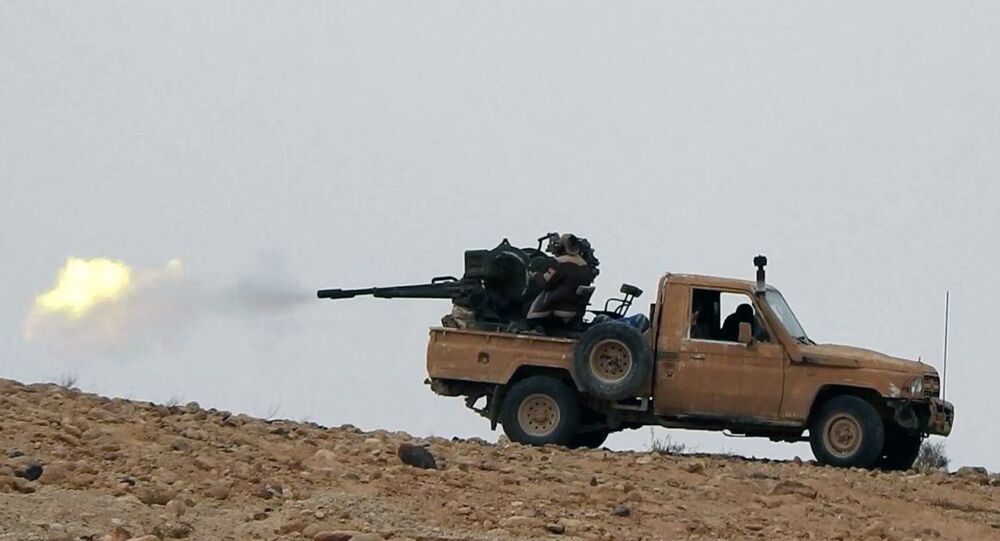 What We Know So Far About Daesh Attack on Palmyra

On Sunday, Daesh attacked and recaptured Palmyra, which had been liberated from the terrorists by the Syrian Army with the help of Russian warplanes in late-March. The ancient city had suffered for eight months under Daesh control.

© REUTERS / Omar Sanadiki
Pause in US-led Offensive in Raqqa 'Was Designed to Let Daesh Attack Palmyra'
During the invasion, the militants destroyed a number of ancient objects, including the necropolis, the Arch of Triumph, as well as the temples of Baal Shamin and Bel.

Some 4,000-5,000 militants, including hundreds of suicide bombers and armored vehicles, took part in the attack.

Terrorists began attacking the city on Saturday. Their offensive was thwarted by the actions of the government forces supported by Russian aviation.

Despite the defeat, they resumed their attack on the city from the northern, eastern and southern sides.

© REUTERS
US General Says Daesh May Have Seized Anti-Aircraft Weapons in Palmyra
Shortly after the attack, the Syrian Army moved to the suburbs of Palmyra and engaged in clashes with militants.

According to Talal Barazi, Governor of Homs Province, the army delivered stiff resistance and inflicted losses on the terrorists.

He noted that Daesh was attacking Palmyra from several fronts. A source earlier told RIA Novosti that Palmyra's residents had been evacuated and the Army had begun fighting against the jihadists in the city suburbs.

"After the evacuation of all residents last night, the Syrian Army has completely left the city of Palmyra. Fierce fighting against Daesh jihadists is going on in the city suburbs," the source said.

According to the Russian Defense Ministry, Daesh used vehicles loaded with explosives and suicide bombers during the attack.

"At dusk, Daesh terrorists used cars loaded with explosives and suicide bombers on one of the directions, broke through the defense of the city and entrenched themselves in its suburbs despite heavy losses," Russian Defense Ministry's spokesman Maj. Gen. Igor Konashenkov said.

The spokesman added that the Syrian Army, supported by the Russian Aerospace Forces, had repelled two powerful attacks. The militants actively used cars loaded with explosives and driven by suicide bombers, as well as tanks and rocket artillery systems.

© AP Photo / Rased News Network via AP, File
Pain in Palmyra: What Syria Should Expect After Daesh's Return to Strategic City
Over recent months, Daesh has tried to oust the government troops from their defense lines several times. Having amassed considerable forces to the west of Palmyra, the jihadist group sought to seize two oil and gas fields, but all of their attempts were resisted. The terrorists intensified their attacks on the ancient city over the last week and managed to capture several high grounds in proximity to Palmyra.

On Monday, militants captured several villages and an oil field in the vicinity of Palmyra, but their offensive was stopped. Aviation continued airstrikes on Daesh, eliminating the jihadists and destroying their vehicles.

"This city [Palmyra] used to be the under control of terrorists but we have liberated it with Russia's support. We will do it again…but we have to realize that Aleppo is our priority at the moment," Syrian President Bashar Assad said in an interview with Russian television on Wednesday.

According to the president, the Syrian Army was recruiting maximum efforts to strengthen defenses in Aleppo to prevent the city from being taken over.

© REUTERS
Daesh Attacking With 'Huge Manpower and Firepower' in Palmyra Shows Foreign Support - Assad
"We will not stop [the offensive]. The ceasefires take place only in areas where terrorists surrender their arms or agree to withdraw," Assad stressed. In turn, Russia's deputy foreign minister Vladimir Titov said Monday that Moscow would do all it can to make sure terrorists will not return to Palmyra.

"We consider the liberation of Palmyra to be a very important result of our joint actions. Obviously, we will do everything to prevent terrorists from returning to these areas," he said.

However, the question remains how several dozen Daesh terrorists with military equipment managed to quickly relocate to Palmyra from other Syrian regions and Iraq.

Daesh terrorists managed to enter the ancient Syrian city of Palmyra because they using the so-called "cloud tactic" to secretly move in small groups, suggested Alexander Perendzhiev, a political and military analyst and lecturer at the Plekhanov Russia University of Economics.

© AP Photo / Militant Photo
Daesh in Disguise: Terrorists Moved to Palmyra 'Dressed as Bedouins & Soldiers'
Disguised as Bedouins, locals or even personnel of the Syrian Army, they arrive from different directions and concentrate in one unremarkable location. As a result, a powerful militant force suddenly emerges in one place," he told RIA Novosti.

Perendzhiev added that because of their covert movements terrorists have managed to gain the advantage of surprise in their approach to Palmyra.

At the same time, the Syrian Army did not have the time or capabilities to protect the city and Syrian forces were forced to protect themselves.

Meanwhile, President Assad said that the timing of the attack correlated with Washington’s decision to lift restrictions on arms supplies to Syrian opposition groups. President Barack Obama signed a memorandum on the issue last Thursday.

"There's a direct link between these two, so the question is to whom those armaments are going to? In the hands of who? In the hands of ISIS [Daesh] and al-Nusra [Front], and there's coordination between ISIS and al-Nusra. So, the announcement of the lifting of this embargo is related directly to the attack on Palmyra," Assad stressed.

Sabbah Zanganeh, former Iranian envoy to the Organization of Islamic Cooperation, suggested that suspension of a military operation in Raqqa by a United States-led international coalition was designed to help militants relocate to Palmyra.

"The suspension of the Raqqa operation by a US-led coalition was designed to let militants redeploy from Mosul to Palmyra. The entire operation was made up and carried out in coordination with the US and some regional players," Zanganeh told Sputnik.

The first deputy chief of the Main Operational Directorate of the Russian General Staff Viktor Poznikhir said that the situation in the city had stabilized due to the Syrian Army's operation with Russia's aerial support. Russia also helped Syrian government forces to launch a counteroffensive.

"Syrian troops supported by the Russian Aerospace Forces have stabilized the situation near the city of Palmyra. Multiple attacks by Daesh militants have been repelled. The main front line is located near the city of Tiyas and the T4 airfield. The Russian Federation is helping the Syrian leadership in organizing a counteroffensive on Palmyra," Lt. Gen. Poznikhir said.

On Friday, Russian President Vladimir Putin commented on the Daesh offensive on Palmyra.

According to the Russian leader, the situation in Palmyra was a result of discordant actions of different players in Syria.

"Everything that happens in Palmyra is the result of uncoordinated actions between the so-called international coalition, Syrian authorities and Russia," Putin said at a news conference in Tokyo after Russian-Japanese talks.

"I have said it many times, it is necessary to combine efforts to be effective in the fight against terrorism," the Russian president added.